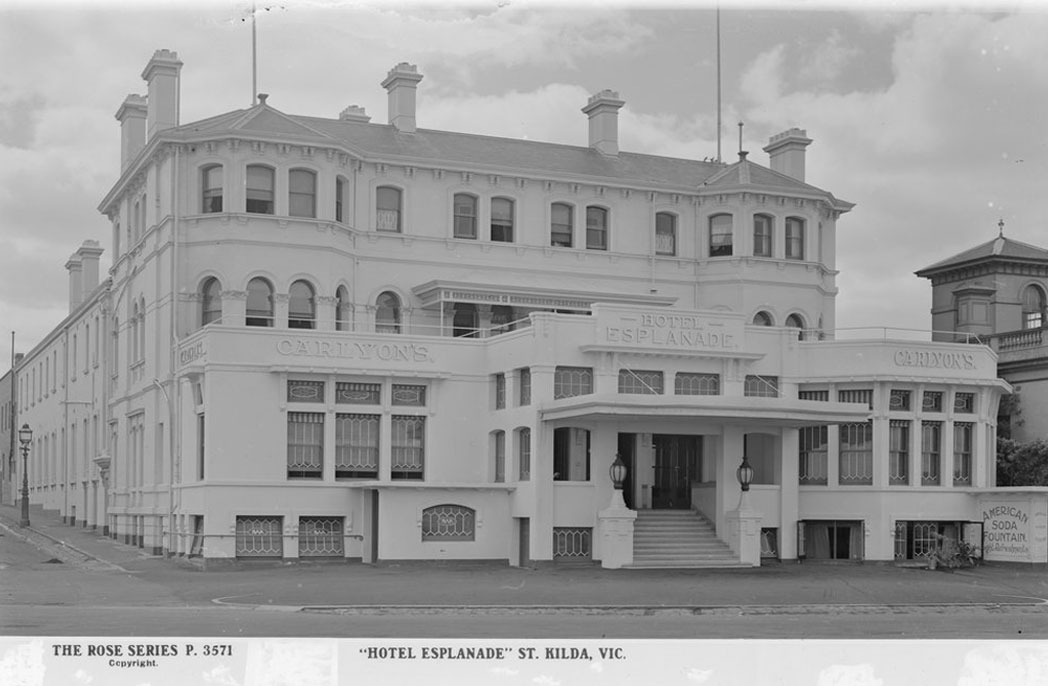 Since its opening in 1878 – over 100 years ago – The Esplanade Hotel (known to locals as ‘The Espy’) has stood as a landmark of Melbourne’s live music scene, and has been subject to a number of controversial architectural proposals.

Originally designed by architects Alfred Louis Smith and Arthur Ebden Johnson (who also designed the Bank of Victoria, the Athenaeum and the Melbourne Law Courts), it remains one of the earliest, largest and most prominent 19th century resort hotels in Victoria.

The Espy was originally built as an exclusive hotel, however a ground floor lounge bar was added to it in the 1920s to provide entertainment for the middle classes, along with a ballroom designed by architects Gibbs and Finlay. Following this, the hotel quickly became a leading dance and jazz venue, at a time when jazz was considered by many to be immoral and threatening to cultural values.

In 1973, following a plummet in St Kilda’s tourism, the hotel was proposed as the site for Melbourne’s first casino, while the owners wanted it to become a 20-storey, 600-bed hotel. Fourteen years later, attempts were again made to turn the hotel into a high-rise – an 18-storey building with the hotel below and 85 apartments stacked on top of it. By the late ’80s, the community began to push back against development proposals for the site, with concerns that ownership changes would result in a deteriorating of the venue as it were and its position in the live music scene.

In the early ’90s, the hotel was bought by Becton Corporation, which announced a design competition for the site. It was won by Fender Katsalidis, with a proposed 38-storey establishment. In response to this, “a rally was attended by 1000 people and 11,500 objections were collected,” says the St Kilda Historical Society (SKHS), a move which proved successful as the suggested development never went ahead.

Live music has formed a monumental component of The Espy, and likewise, the venue has contributed much to Melbourne’s music scene. From 1994 to 1998, there were over 300 live recording sessions at the venue, with about 25 different acts performing live each week, says the SKHS.

Fast-forward to now, and The Espy has been closed for almost two years, fenced off and boarded up. With such a long and rich history, accompanied by a number of tumultuous design proposals, the last two years have left the community anxiously waiting to hear what will become of their beloved venue. News has emerged that it has been bought by Melbourne-based hospitality group Sand Hill Road – which also owns Garden State Hotel, the Terminus Hotel and the Prahran Hotel – and that Technē Architecture and Design has been appointed to help bring the hotel back to life.

ADR speaks to Technē director Justin Northrop about the project.

Technē has been appointed to redesign the Espy. What will be included in the renovation/redesign?
We are really thrilled to be involved in the re-invigoration of this iconic venue. The renovation includes a top to bottom overhaul with some areas touched lightly and other areas completely re-imagined.

Which areas of the hotel will be reinvigorated/reopened?
All of them! Even, hopefully, the second floor which has not previously been accessible to patrons. It is important to note here that the exterior and important elements of the interior, such as the Gershwin Room, will remain largely untouched.

What does the brief involve?
We have a clear, functional brief for most spaces within the hotel; it isn’t static. The process of sketch design reveals the possibilities and limitations of spaces and the brief has been evolving as a result. We have also been given an over-arching stylistic statement for the refurbishment – kick-arse Victorian grandeur. It remains to be seen how that is expressed.

What do you hope to achieve in your work on the Espy?
We hope to achieve lots of things, but above all, we aspire to return the Espy to its former glory. We want the building to welcome a new generation as well as welcome back old fans by embracing the best of the familiar while acknowledging that it’s 2017.

The co-owner of the Espy, Andy Mullins, also told Broadsheet, “Every single person who steps their foot in the door, we want them to instantly recognise what they knew and loved about the Espy. It has to be that way. So we’re really conscious of that.” What would you say are the things that people “know and love about the Espy” and how will you ensure that those elements are still retained?
That’s not a simple question. Over the years the Espy has meant different things to different people. They might remember a particular epic gig or the Sunday sessions in the front bar. They could recall the sheer volume of amazing artists who have graced the stages over the years, or the noisy and vibrant cheap eats of the Espy Kitchen. The fact that the Espy is composed of so many different areas means that it can still offer this rich variety of experiences. Music will remain important, as will good food, cold beer and an ambience that remains true to the spirit of the place.

The Espy is much-loved for it’s ‘grunginess’ – how are you planning to reinvigorate the venue while retaining this element?
The building has such a fantastic patina of age. Dishevelled layers of paint peel back to expose layers of building and decoration that date back to 1878. It would be wrong to clean all that up. We want the rough edges, in every sense, to remain a part of the Espy.

It does have has a rich and long history. How else do you plan to embrace this in your works?
There are many stories you could tell about the Espy: the disco era night club in the Gershwin Room (no current plans to revive this scene!) or the massive archive of original gig posters, which will hopefully be displayed somewhere.

One piece of history we are looking forward to re-telling is that of the Esplanade Hotel’s longest resident, Alfred Felton, notable philanthropist and art collector. Freddy Felton’s rooms will be re-furbished as a bar in the character of a Victorian salon, full of art and charm.

(Ed’s note: Felton was a benefactor to the National Gallery of Victoria (NGV). Upon his death, he donated over £350,000 to charity; half of the sum went to the NGV and has purchased thousands of the gallery’s works, which have an estimated current value of around $1.5 billion. He is credited as having transformed the NGV, helping make it what it is today. He lived at The Espy for over 10 years.)

How will the Espy’s prominence as a live music venue affect your designs? In what ways will you have to take sound into effect when planning?
Live music will remain a key part of the appeal of the Espy. In design terms, controlling the transmission of noise between internal spaces and protecting adjacent residences from excessive noise will be vital to the hotel’s ongoing success as a live music venue.

Given the venue’s significant history as an icon of Melbourne’s culture and local music scene, do you feel more pressure on this project than you do on others?
In a word, yes. We’re respectful of its history, its legacy and the esteem in which it’s held. That said, we have worked with its new owners, Sand Hill Road, on numerous jobs and I have a real confidence in the collective team’s ability to faithfully realise the vision for the Espy.

When are you set to begin and finish work on the hotel?
The design process has well and truly started and will continue for some months. We are hopeful to have permits in place to start a 12-month construction process by the end of this year.

Stay tuned for more Espy updates as they come through.