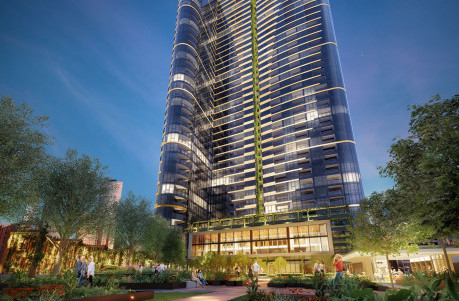 The trio of towers that form Melbourne Quarter, designed by Fender Katsalidis Architects, have been approved by Victoria’s Planning Minister, Richard Wynne.

The three towers will be located on Collins Street, adjacent to Southern Cross Station, and will make up a sustainable new city neighbourhood, including approximately 1690 homes. The apartments will include one, two, and three bedroom options, all planned to achieve 5-star Green Star ratings. Two of the towers will reach 135m tall, while a third, smaller building will top 58m. Melbourne Quarter will also feature commercial spaces. The precinct, which will take up a 2.5 hectare block, has a strong environmental and community focus. More than half of the project is dedicated to public spaces, including a park, a public square, a retail plaza on Collins Street, and a 2000 square metre sky park above Collins Street.

The sky park will be open to the public, and offer “a unique experience in the CBD, set to offer workers the ability to re-charge or work outside the office, to enhance health and wellbeing,” says the Melbourne Quarter site. Construction of the towers is set to begin this year, and will be delivered in stages over six years.