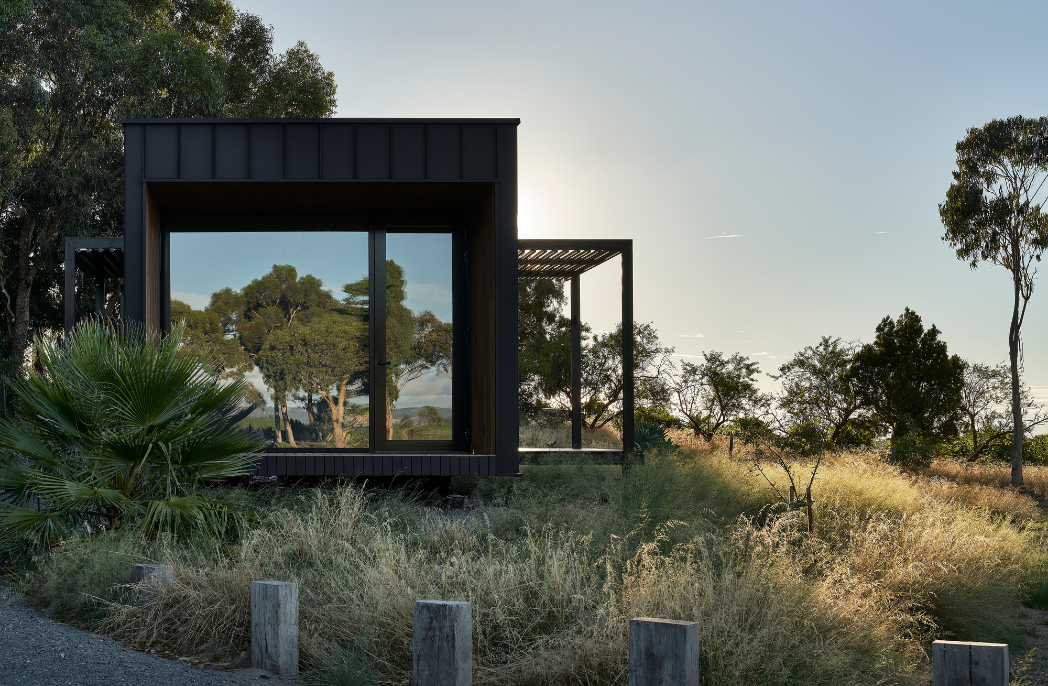 Esca, Blewitt Springs: While many emerging practices have their hands full simply getting their heads around the business of architecture, the team at Das Studio has dived straight into operation of the buildings too.

Sara Horstmann and Dino Vrynios of Das Studio are part of a team that has created a business designing, and now operating, luxury accommodation for regional tourism. The Blewitt Springs Esca, outside of Adelaide, is an experiment in the polars of luxury and withdrawal. The pair has created an experience with all the comforts of amenity without breaching the feeling of wilding and removal.

“The aim was to collect our learnings from prefabricated construction methodologies and demonstrate to people how good it can be,” says Vrynios. “Many people have a preconception around what modular and prefabrication is, which wasn’t necessarily justified.”

When creating their Esca endeavour, the team underwent a period of thorough analysis to discern what sector could benefit from a high-quality modular approach to design and found that regional tourism was the logical answer.

“This was in 2015, prior to the tiny home movement, so we were quite proud of the fact that we were out in front of the mindset shift,” says Vrynios. But make no mistake: these are not tiny homes. At around 55 square metres (with additional exterior deck areas), the Esca suites are the size of some two-bedroom apartments.

“We wanted to show how we could create a commercial environment where it made sense to design a high-quality building using a modular construction methodology,” says Vrynios. “Esca is about creating a five-star accommodation suite that is off-grid and can be dropped anywhere, unlocking value in these regional locations that you couldn’t easily do with traditional construction methods.

“We weren’t just designing a building or a project, but a whole business and a complete solution,” he adds. The pilot project was one of Horstmann’s first buildings when she started Das in 2018. It was sited on an established vineyard in McLaren Vale. But the plan was always to build two.

For the pilot, Horstmann, Vrynios and the Esca team funded the build, and the client, who was already in the business of luxury accommodation, leased the building off them. So successful was the project that the client bought the second building outright.

“The first Esca has been booked out at around 90 percent occupancy since we dropped it on the site,” Horstmann says. The building, which cost around $220,000, paid itself off in bookings in around two years.

The brief for the second building was to replicate the luxury accommodation experience using the same modular and prefabricated principles as the first building, but with a different feel. “The second building was more of a collaboration with the landowner; as they were purchasing the building outright, they sought more involvement in terms of what it would look and feel like,” says Vrynios.

“From a design perspective, this second build was about proving a different way of delivering the same building. We tested and modified everything in terms of its structure, and also the narrative and experience.”

With degrees in architecture and product design, Horstmann is a designer by trade.  “What I love about our Esca projects is that we can look at them like you would a product that can be prototyped,” she says.

“After we delivered the first building, we went through a process of review and testing to determine what could be done differently or better. What are the different ways that we could design the structure or lift the building? We were able to then have another go and incorporate all of those learnings into the second building in the same way that you would if you were prototyping a piece of furniture, for example.

“And the key part of the brief that we crafted for ourselves was defining and scripting the user experience. What does 48 hours in one of these suites look like? So designing around these experiences was a key part of determining how the building would function,” adds Vrynios.

“The clients loved France, and the interiors of the existing accommodation on their vineyard was stylistically French provincial,” says Horstmann. “For the second building, they wanted to evoke summer in the south of France, the design was all about warmth, texture and French sophistication.”

The Esca, Blewitt Springs delivers a new level of locality to the luxury accommodation experience. Nature and the built environment coalesce in a manner that feels incongruous and yet entirely appropriate.

Static meets dynamic in the robust silhouette against a backdrop of whipping grasses and changing sky. Inside is a wholly different kind of wonder. The warm hues of the oak parquetry, the mustard tiles and the woven ceiling generate the impression that the space is perpetually bathed in a pool of golden light.

There is a tactile materiality to the herringbone floors, the render finished walls with the battening detail, and the black steel and chrome accents. The deep recessed window acts like a private viewing box from which to look out over the epic surrounds. From the outside, these monolithic glazed windows reflect those surrounds, almost shrouding the building in trees and sky.

The deep-set windows and the low, linear profile create an almost telescopic effect through the building, providing an uninterrupted view of the landscape. This one suite has three outlook points and outdoor spaces relative to its modest footprint, forging an intimate connection to the outdoors.

“Our philosophy is not to participate in projects in a traditional way,” says Vrynios. “Normally as architects, you design and then someone constructs. You get paid for your time and then you let it go. Invariably, when you’re playing in that space, it can be a race to the bottom because many people don’t understand your value.”

Vrynios theorises that this approach can set the architect up for failure. “For us, our philosophy is, where possible, to design and operate. It changes the length of your sightlines in terms of the decision-making. It means that we can spend more, earlier, because we know that we’re going to reap the benefits of that over a longer period by operating and participating in a project beyond construction.”

Das is now preparing the launch of its own build-to-rent development arm in the coming months. “This means creating projects, and creating new businesses to operate those projects along the way,” says Vrynios.

Horstmann and Vrynios are a driven and ambitious couple with a penchant for ideas and an uncanny ability to turn those ideas into profitable realities. The Esca Blewitt Springs project is a prime example of an intelligent business concept meeting thoughtful and considered design.