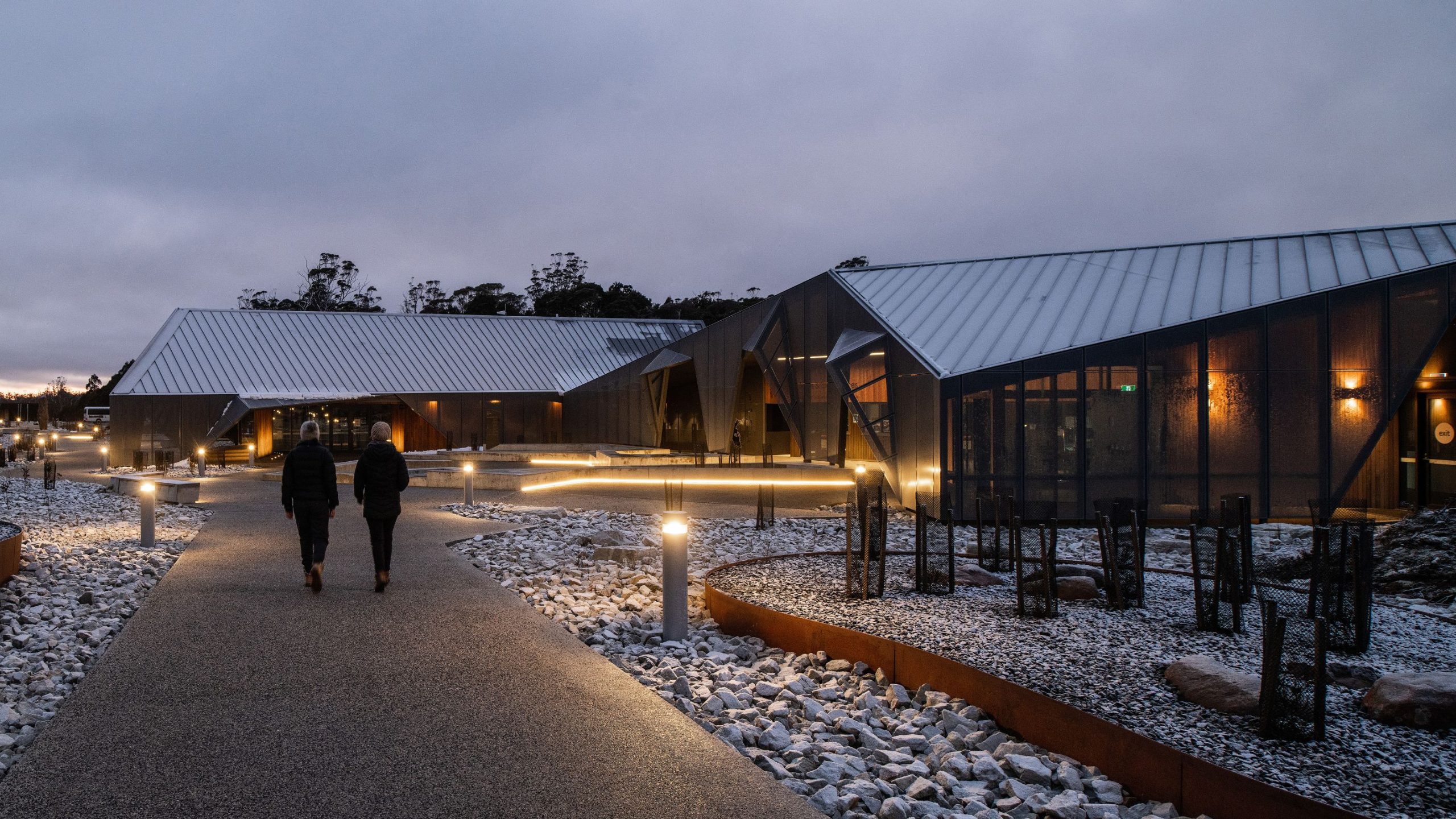 When designing the Cradle Mountain Visitor Centre, Cumulus Studio wanted to create something that felt “carved from a solid rock” as if by a glacier.

The new alpine visitor centre in the Central Highlands region of Tasmania won the Alan C Walker Award for Public Architecture at the 2021 Tasmanian Architecture Awards announced over the weekend.

The jury, chaired by director of Morrison & Breytenbach Architects James Morrison, described the building as an excellent “new gateway” to the Tasmanian Wilderness World Heritage Area.

“Inspired by the geological forces that shaped the landscape, the folded planes of the building create an ambiguity of scale, both formally and experientially,” it wrote.

“A carefully orchestrated series of spaces frame the natural and constructed landscape to create a highly legible sequence that celebrates the path of movement towards the mountain.”

The Cradle Mountain Visitor Centre is the first of a series of buildings envisioned as part of a Tourism and Architectural Masterplan for site, and includes an orientation building, commercial services base, shuttle bus shelter and coach transit centre.

Architects wrapped the three contrasting black pavilions in corrugated cladding made from a series of perforated channels. The triangulated shape was chosen to mimic the “folding angular geology” of the surrounding landscape.

The screens were also designed to reduce the area that needed to be heated and cooled, and create a “grotto-like” interstitial space around the building’s perimeter.

“Materials to mirror nature,” says the Tasmanian practice of the pavilions’ shape.

“Imposing but harmonious. An abstract interpretation of nature. Sharp geometric forms that beckon to a honeyed cave.”

The curvilinear, fringe-like shape of the grey steel panels was also chosen by the architects to conceal – at first glance – the “warm, soft and delicate” interiors of the centre.

“It’s quite a feeling to walk inside the sculpted interior timber cave, a completely unexpected gem inside the building,” says Cumulus.

“While the triangulated timber volume’s complex geometry proved a technical challenge, it’s all the more satisfying to admire it now knowing the hard work involved.”

Inside the centre, visitors follow an “intuitive way-finding strategy” to interact with the site and information checkpoints.

“We used a hierarchy of space that organises services, but lets the staggering natural setting sing out,” explains Cumulus.

“The design required an in-depth understanding of visitor movements across the site. It needed to accommodate the wide gap between peak and average visitor numbers and feel inviting in both cases.”

The sculpted honey-coloured plywood in the interior spaces was also carefully selected by Cumulus to capture the “poetics and qualities of the place.

“Because timber is natural, guests feel connected to nature. It often evokes a response other materials don’t.

“At every turn, we aimed to honour the significance and sensitivity of this world-renowned national park.”

Plantings were then done in singular species on mass to create “striking groves of vegetation” that represented the sub alpine flora communities of the area.

The other major winner at this year’s Tasmanian Architecture Awards was the boutique hotel Moss 25 by Circa Morris-Nunn Chua, which took home the Colin Philp Award for Commercial Architecture.

Moss 25 was also awarded the inaugural Tasmanian Architecture Medal, while Circa Morris-Nunn Chua also won the The Edith Emery Award for Residential Houses (Alterations and Additions) for Arthur Circus.

Led by Kylee Scott, Todd Henderson, Peter Walker and Keith Westbrook, Cumulus Studio is based out of Tasmania. The practice is recently behind the boutique hotel Stillwater Seven and this incredible 200-year-old mansion, which incorporates Japanese shou sugi ban.