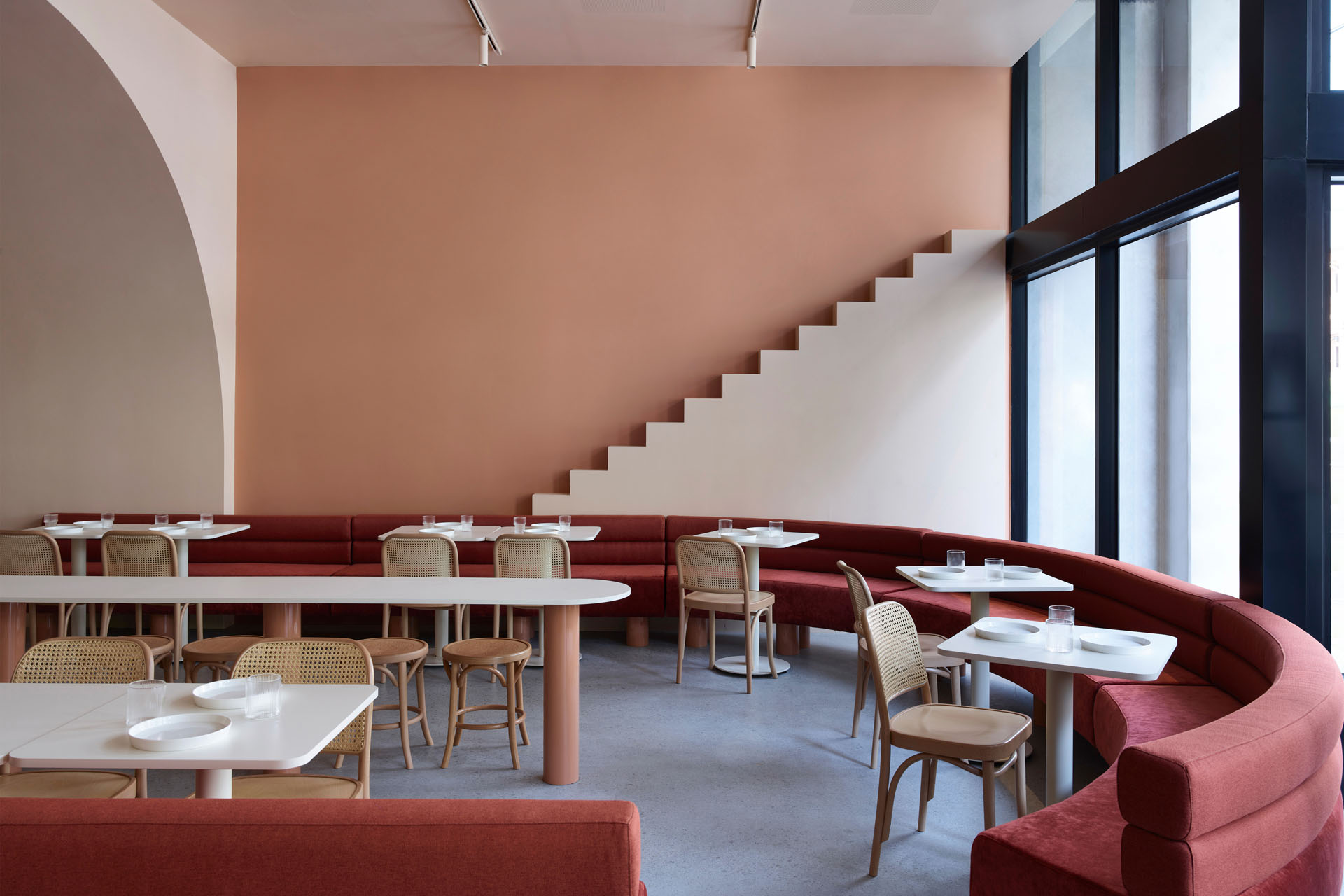 The “idiosyncratic visual style” of director Wes Anderson is instantly recognisable in the latest café project from Biasol.

The Budapest Café in Carlton, Melbourne, comes off the success of the similarly named cafe in Chengdu, China, which Biasol also designed in 2017.

Both were inspired by Anderson’s distinctive style and Melbourne’s café culture with the Chengdu iteration layering mint green and pink for a “feminine and fun” space with “surprising design features” that encourage customers to explore and physically engage with the space.

The new 94-square-metre Melbourne outfit is a similarly “imaginative and evocative” space with “offbeat elements”, but features a natural, earthy colour palette.

“Anderson’s films are memorable and magical. He is renowned for symmetry, detail and one-point perspectives, and he creates his mythical worlds through whimsical sets, vivid colours and nostalgic sentiment,” Biasol director Jean-Pierre Biasol tells ADR.

“Having studied his style for The Budapest Café in Chengdu, we evolved the design experience for the Melbourne café.”

An arched-shaped banquette seating in a dark red dominates the café, wrapping almost the entire room beneath a double-height space.

White tables and rattan-style seating flank the banquette, while a communal bar table with glossy peach legs sits at the centre of the space.

Behind it, a tunnelled arch leads patrons deeper into the café and frames the point-of-sale counter at the end. Subtle silver hardware is used as a metallic contrast.

“There is a bolder approach to the design elements, while still optimising the space to its fullest capacity,” says Biasol. “Bold, offbeat elements encourage patrons to engage with the design.”

The glossy, tubular point-of-sale itself mirrors the same terracotta and orange colours used on the walls behind it. In another part of the café, a narrow ‘stair’ leading nowhere draws the eye in its softer beige colour.

Another ‘staircase’ is likewise framed in an arched recess, encouraging patrons to engage with the design, and capture and share the quirky, stylised images.

Biasol says it sought to minimise the built form in an effort to maximise the space and impact of colour palette.

“Using a tonal palette, we played with depths of colour to highlight fanciful elements and create a unique sense of two-dimensionality,” says Biasol.

Founded by Jean-Pierre Biasol in 2012, Biasol is a Melbourne-based design studio working in residential, hospitality, workplace and commercial environments.

The studio recently designed this Melbourne home with stone at the centre of every room and released its Comoda sofa collection, inspired by Biasol’s Italian heritage.