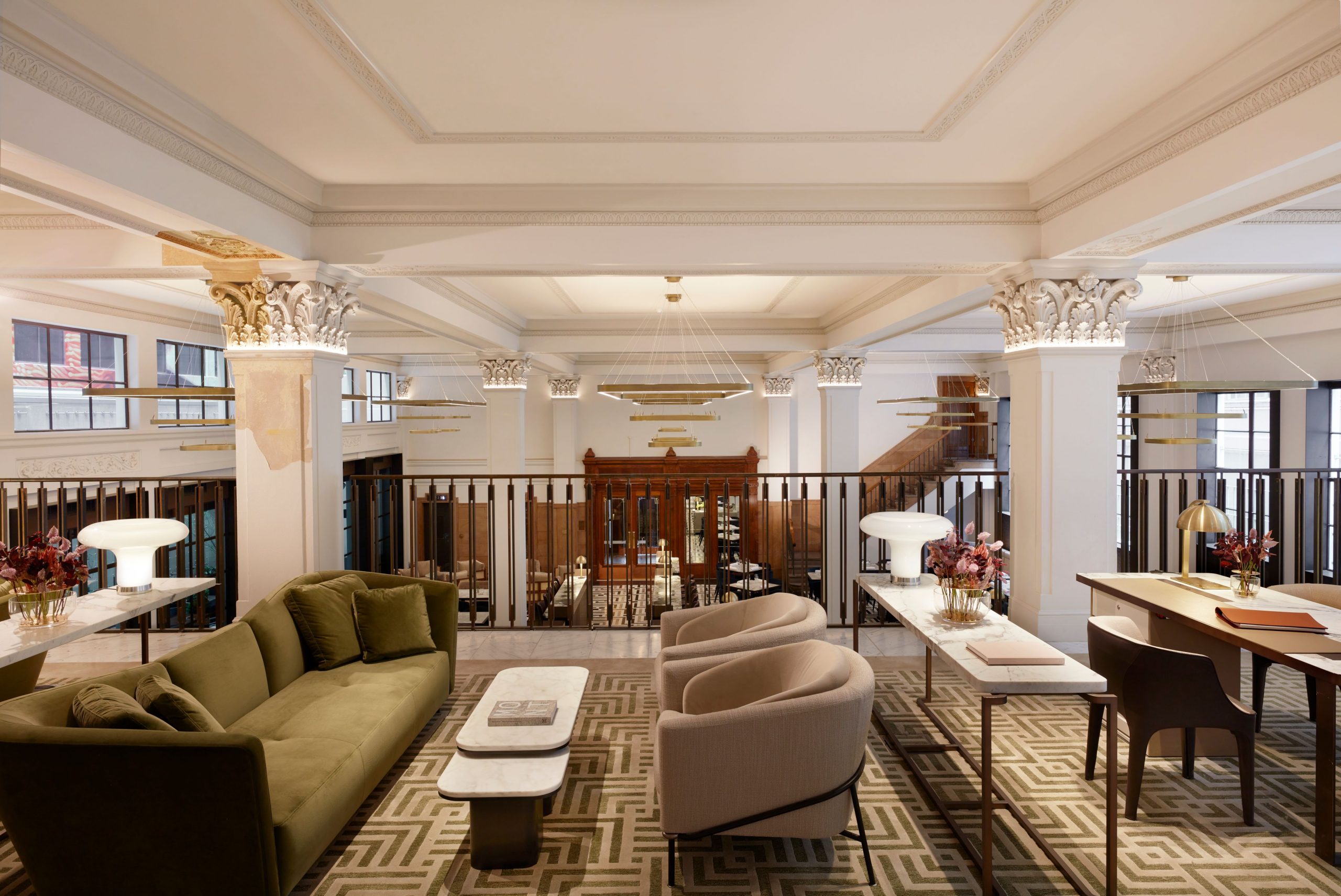 Bates Smart has completed its refurbishment of the Melbourne Heritage-listed Equity Chambers building, transforming it into the site of the city’s first Hilton hotel.

Designed by architects Oakley & Parkes in 1931, the original building on the corner of Little Queen and Bourke Streets was the first synagogue in the state and had been the longest continuously occupied barristers’ chambers in Australia.

The building was sold in 2017 for $25 million to Singapore developer Michael Kum of M&L Hospitality after previous plans to turn it into apartments with retail and commercial space were defeated by the complexities of various Heritage listings.

The new hotel sees six levels added above the existing five storey building paired with a new 16-level tower at the rear. Inside, 239 rooms and 5 suites are accompanied by a rooftop terrace, meeting spaces, restaurant and bar.

“The new building is a restrained and respectful response, providing an elegant backdrop to the existing building,” says Bates Smart director Julian Anderson.

“It’s a real journey of discovery – it’s about taking heritage and opening up a piece of grand Melbourne for everyone to explore.”

From the laneway, a porte cochere and entry reveal an illuminated bronzed metal and gold glass screen between two sandstone columns that “echo the original neo classical design” of the Bourke Street portico.

Mindful of the Heritage character of the site, which is an example of the exotic revival architectural style popular in Victoria during the inter-war period, Bates Smarts designed the facade with a “calm and ordered” system that reflect the hotel use of the building.

The Bourke Street facade is “more open” and takes advantage of the views and natural light. Restored Heritage lifts, stairs, lobby and a new mezzanine guest lounge are all carved from the existing volumes of the former grand banking hall.

The reception is on the first floor, accessed via Little Queen Street, and overlooks the double-height ceiling of the below restaurant, Luci and The Douglas Club bar, both of which have their own independent entrances.

The lobby is connected to the space and to the meeting rooms above visually and physically via a feature staircase.

These Heritage elements have been paired with bronze accents, marble stone finishes and upholstery in navy, taupe and royal blue.

“We retained and restored a number of artefacts from the building excavation to bring our adaptive reuse philosophy to life,” says Bates Smart interior design director Jeffery Copolov.

“Even names of employees on the original office doors remain and display cases enclosed with objects pay tribute to the history of the site.”

Other pieces have been contributed by local artists Kitt Bennett, who provided the large and colourful mural on the external wall, and David Lee Pereira, who produced a piece for the private events space.

“It’s a very different design concept compared with other offerings in the CBD,” says Copolov of the new Hilton hotel.

“A lot of the graphic motifs and pattern making, including upholsteries and carpet patterns have been inspired from the original facade.

“We wanted to introduce a graphic element that carried throughout the hotel and are interwoven through the spaces to continue the narrative.”

Hilton currently operates the DoubleTree hotel opposite Flinders Station, but the city hasn’t had a Hilton-branded hotel since 2017 when the 396-room Hilton Melbourne South Wharf was rebranded as the Pan Pacific Melbourne.

Bates Smart and M&L Hospitality last teamed up on the construction of the Hyatt Regency, Sydney in 2016.