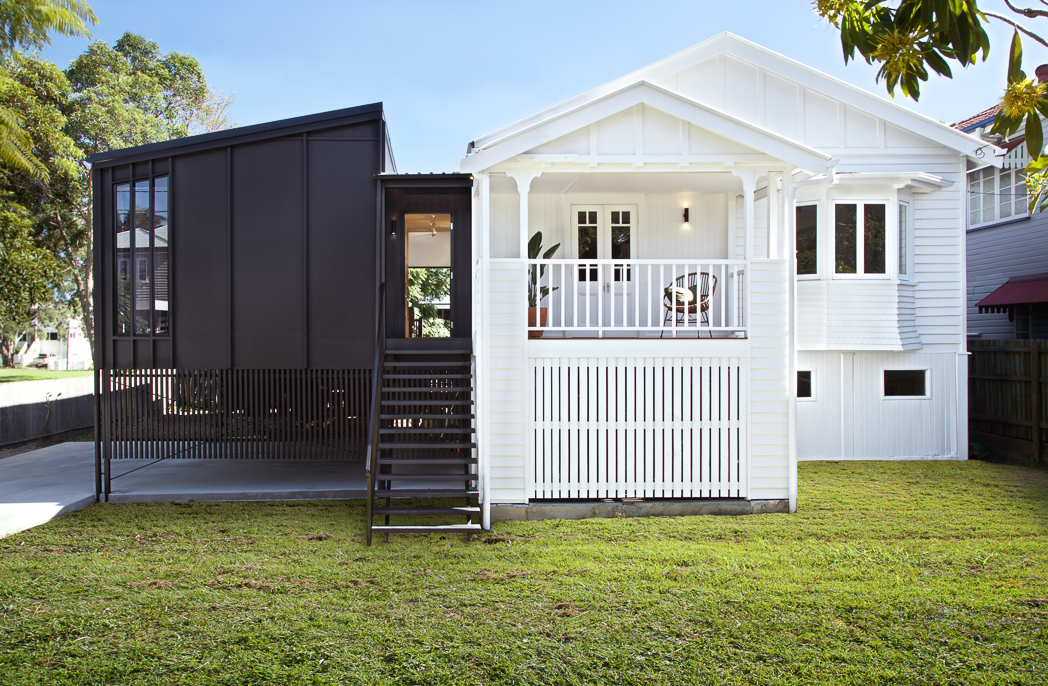 Authentic Brisbane in black and white

Being true to the authenticity of place is the driving force behind .

Located on a street of lovely workers’ cottages in Wilston, Brisbane, Wrightson Stewart’s Wilston project is very much at home and a continuation of the neighbouring aesthetic. To some extent, this sentence is at odds with the radical nature of the expansion, but remains true nonetheless.

Taking the new build/old build divide quite literally, the existing cottage has been redefined as a crisp white entity. In a street of Heritage vernacular, where every architectural shift is picked out in a nuanced tone, this is a drastic departure in itself. Add to this the decision to present the new addition in solid black, and the radical nature of the build becomes apparent (Dulux low sheen black and Lexington white).

What these polarities don’t convey is the quintessential Queensland-ness of the whole. “It was incredibly important to us that the home be authentic to Wilston. I mean, why own a particular type of house if you don’t love it?” asks Ian Wrightson, of Wrightson Stewart (WS). With this in mind, the two seemingly disparate sides are knit as one through echoed roofline and paired verticals of windows. Plus, that very Brisbane solution of a vertically slatted breezeway below the house. In the addition this conceals a carport, while the existing iteration provides an under-house void to bring air throughout. 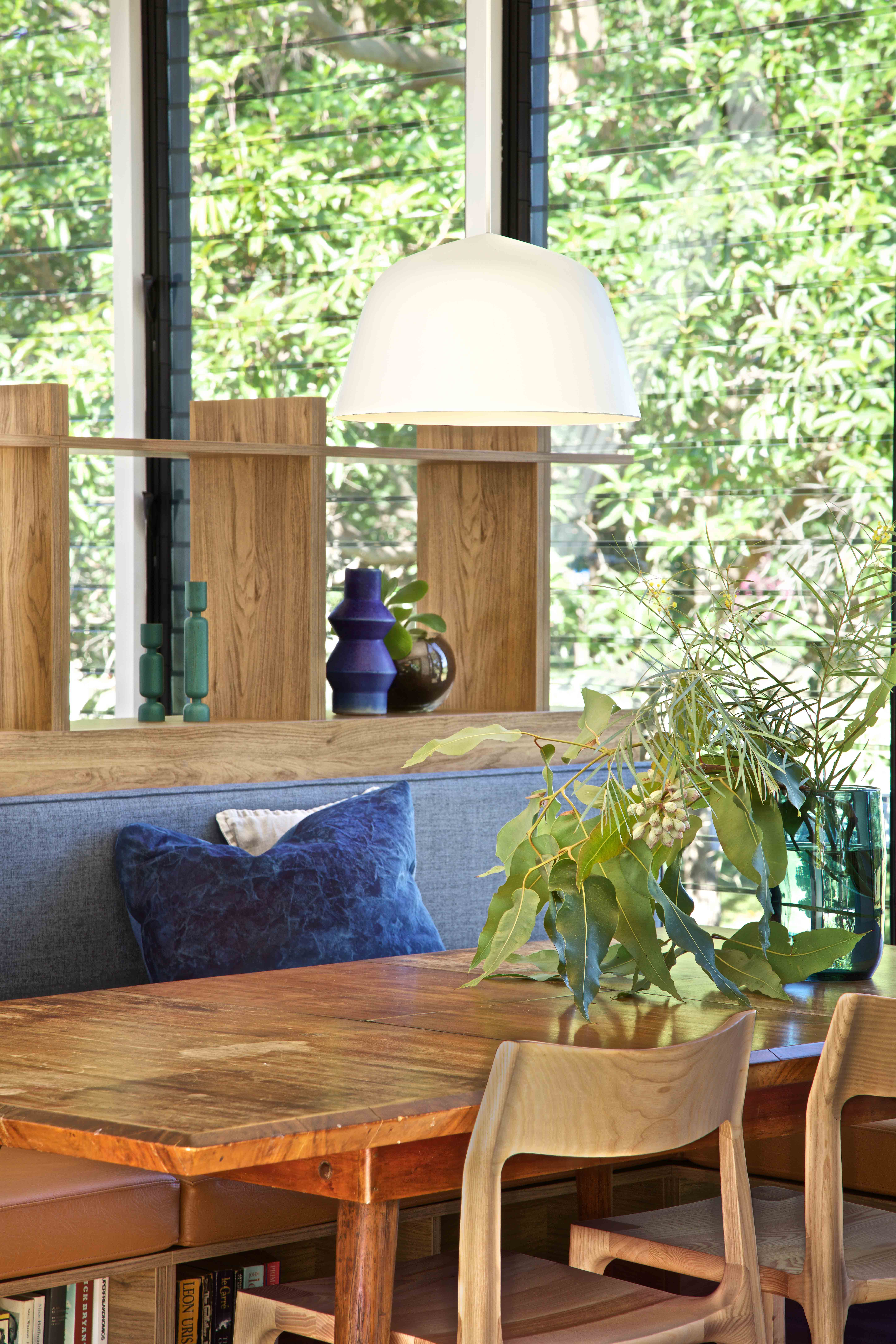 This verticality is revisited towards the rear of the house as a series of framing railings and partition. Within, elements as simple as tiles and timber coalesce old and new without shifting the essential nature of either portion. The original timber flooring in the cottage, for example, is a warm honey tone and has been restored and refreshed. This has been paired with a light golden American oak of a slightly longer grain line used throughout the new (Bona Traffic MD, matt finish). A cross board signals the shift from one wood to the other to celebrate rather than deny the differences of tone and grain.

Needing to expand from a four-room cottage to a family home, the WS design solution posits the Queensland lifestyle as fundamental. To this end, the extension is effectively a very large enclosed deck that swells to the side and back of the cottage. Cleverly designed to shift the weight from the side to create a new centre, the voids in the façade balance the whole to read as symmetrical. The resultant interior transforms the cottage into an office, large master bedroom, walk-in robe and en suite. The addition houses two bedrooms, bathroom, living, dining, kitchen and a monumental amount of shelving for a passionate reader. 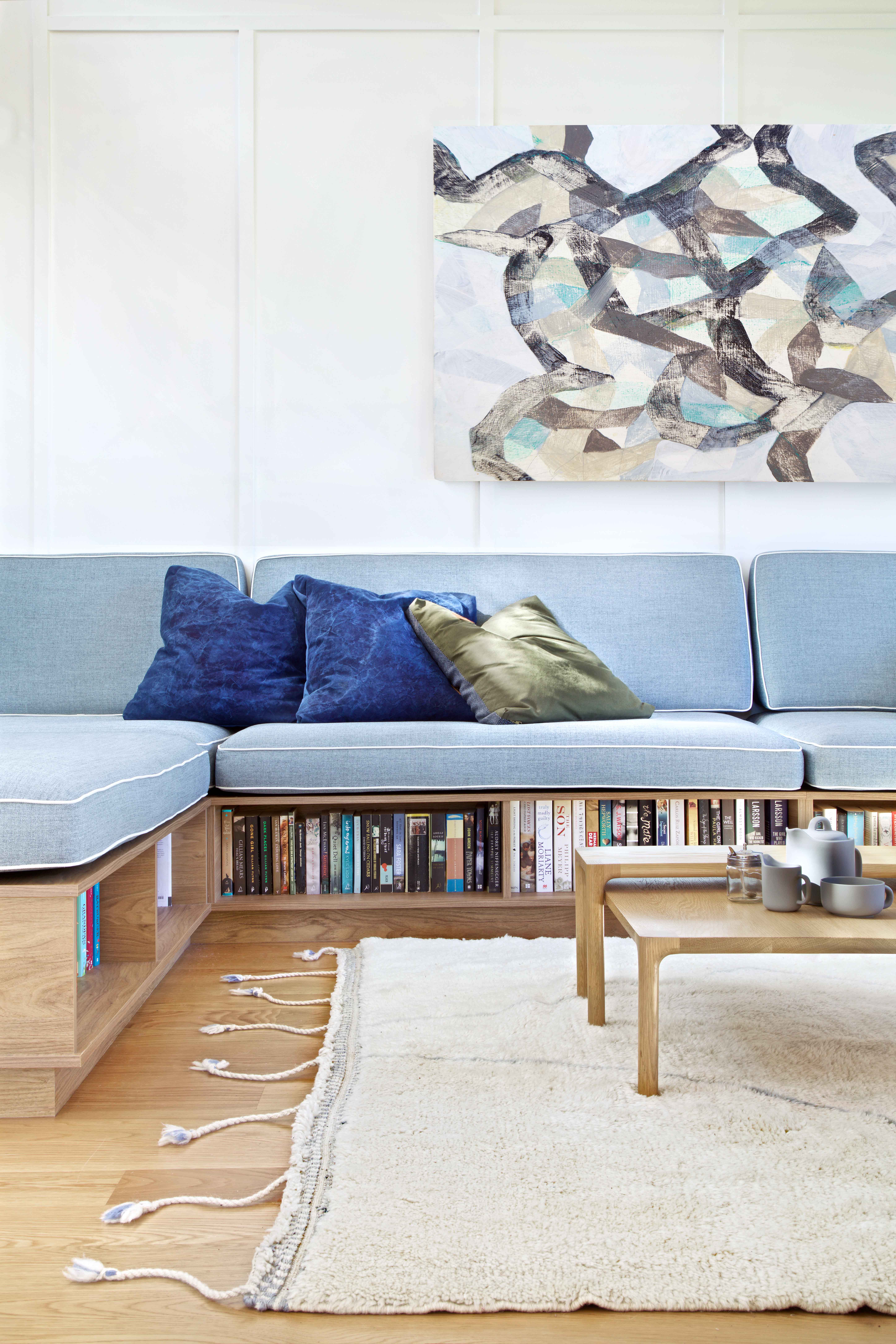 Typically of WS, the house can be read as a large gesture, the black addition and white original. Structurally, this is similarly true with a direct passage from front to back delineating the separate narratives. Also typically of WS, the house presents as a series of considered and well-crafted moments. The bathrooms, for example, use a combination of square and rectangular tiles (RAL matt white, Groove Tiles) to create a simple white on white stripe to frame space. In the main bathroom, a floor-to-ceiling door separates the shower and main vanity from the toilet and basin, effectively making a powder room. This is very nicely done with a small rectangular Lavamani washbasin with Lavamani timber shelf, both from Rogerseller. It also allows the family to close off the daughters’ bathroom area (and attendant clutter) when entertaining.

In the cottage portion everything has been stripped back and renewed, while slight incursions, such as the built-in window seat reactivates space. Similarly, a simple built-in desk provides a lovely office in the space that was once the kitchen. The nature of the cottage has not been lost, with the robe, for example, taking advantage of a tiny window to bring light and a quirky framed view. “By rearranging the function of the four rooms we created a sense of real space,” says Wrightson. 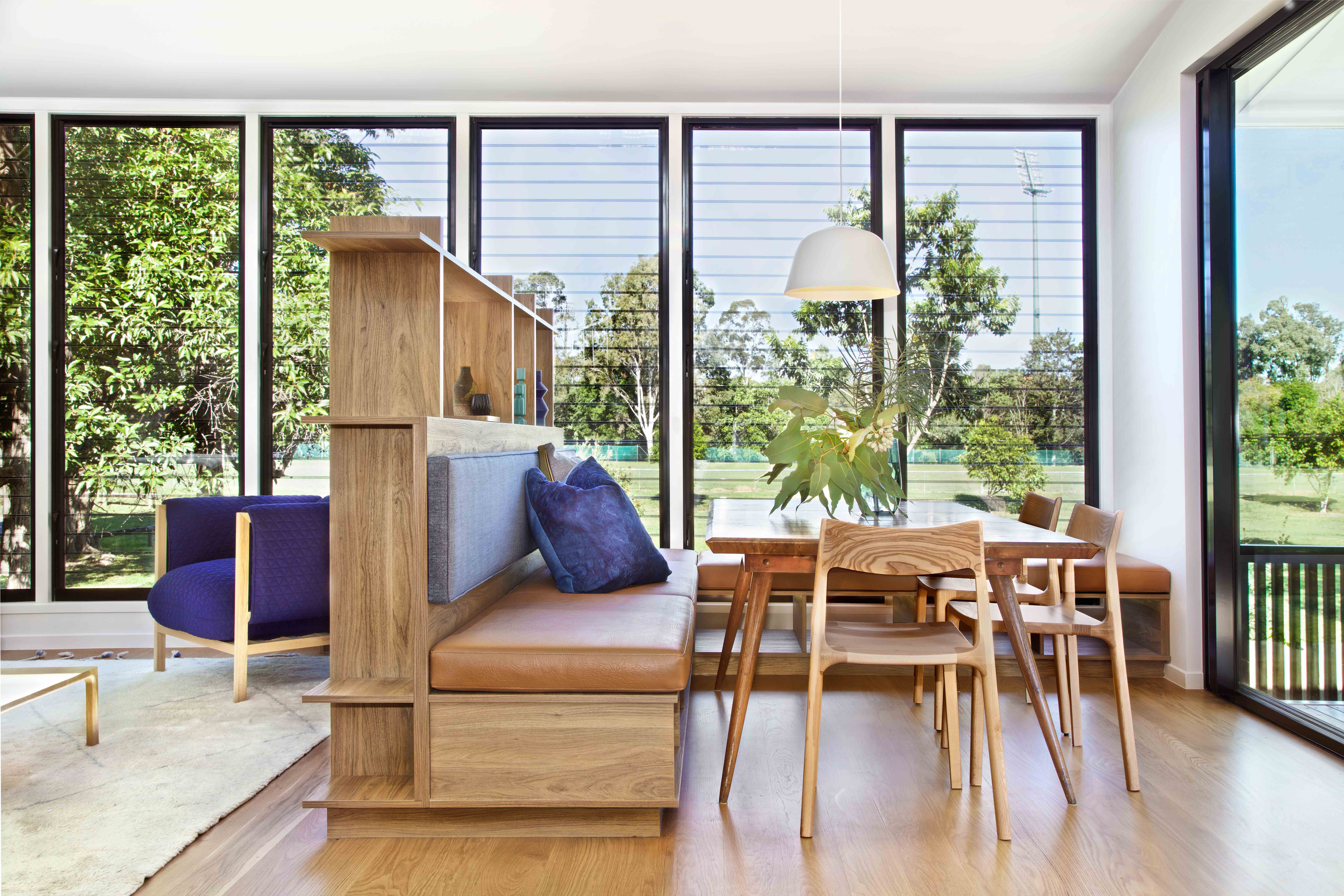 The main statement of the house is the open plan area where living room, dining, kitchen and deck are loosely defined. A slightly modernist wall of shelving in Evenex Tuscan oak (from Elton Group) separates dining from lounge and will eventually be filled with books. Built-in banquette seating similarly has an understorey for books. The Evanex product has been used extensively and effectively for shelving and wall finishes throughout.

Built and running parallel to a large park, the entire sidewall of louvred glass takes in the view (G James Glass and Aluminium). The end wall, also of glass, concertinas open for a fully indoor-outdoor experience. Here a regulation that would have placed a railing at seated eye height has been neatly sidestepped with a sunken perimeter area that, while secured with a low wall, does not interfere with the view. Instead, it is a lovely built-in lounge. A large overhead fan keeps mozzies at bay. 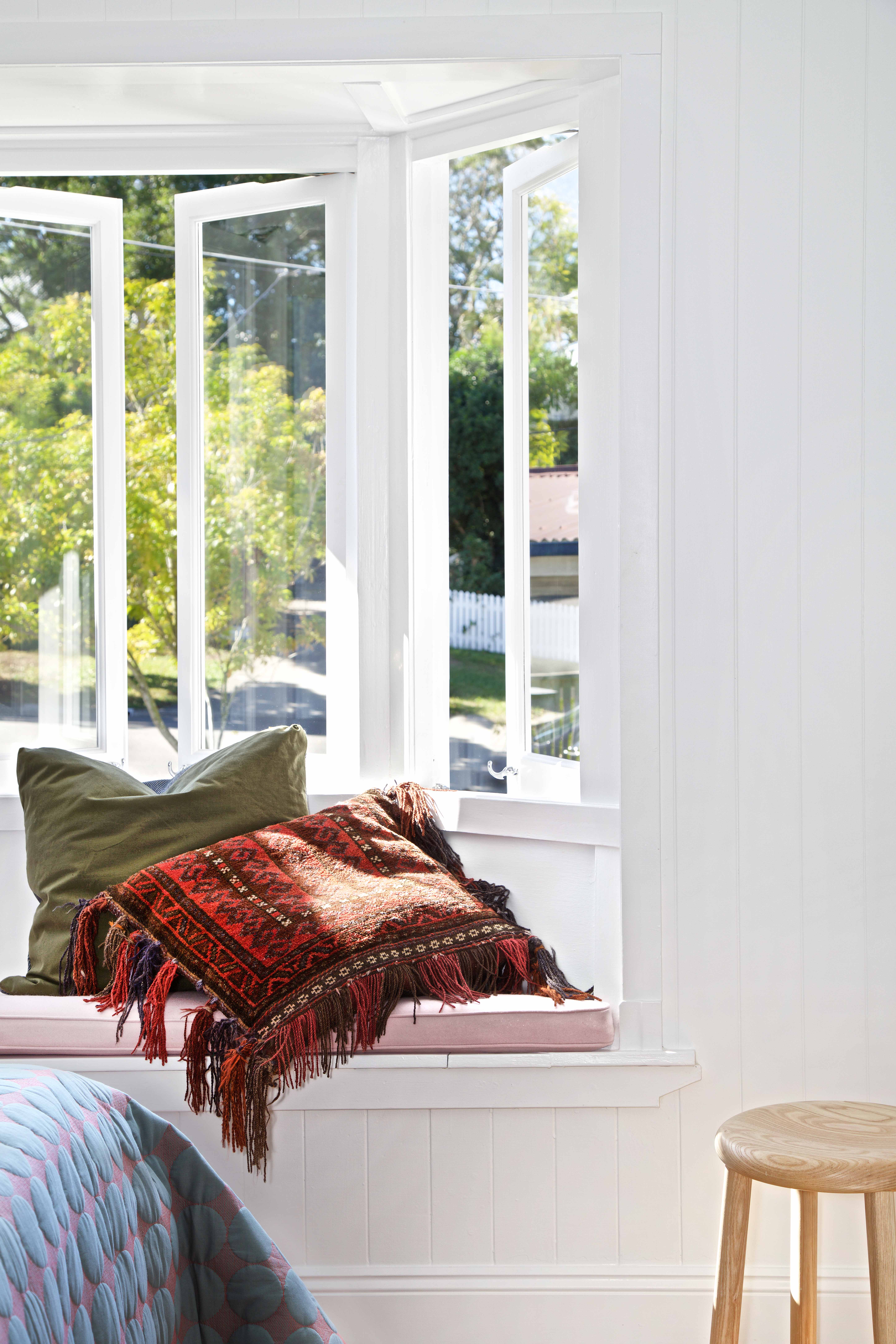 High skylights and low windows framing portions of the neighbouring Queenslander give the kitchen a particularly light presence. Elegantly delivered with simple white cabinetry paired with timber detailing, the kitchen is very much a continuation of the overall space. A surface of white tiles adds a unique touch to the island.

Beautifully resolved and elegantly realised, the project has found a way to incorporate a very small home within a much larger whole without negating the charm and character of the original.