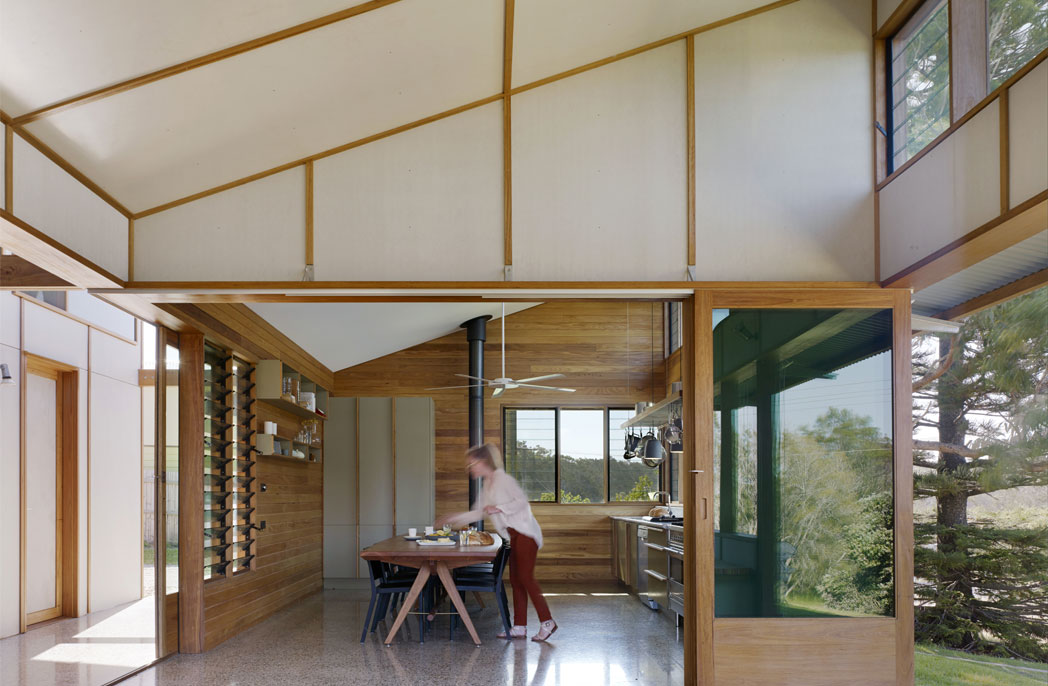 Off the grid: tiny holiday homes

When we hit the road in search of a change of pace and wide-open space, a minimal approach to design can make the destination a little bit more manageable.

It is little wonder that the road trip is so much a part of Australian tradition. Across these boundless plains, with landscapes so scenic, generations of travellers have embraced the open road as an essential, authentically local experience.

When Aussies retreat, we shed the extraneous accoutrements of the every day. Never is it more apparent than when we are away from our domestic routine, that we realise it’s possible to forego most of our worldly possessions in favour of spontaneity, a picturesque destination, and a few moments of blissful nothing. But how to build spaces that encourage and sustain an unencumbered lifestyle?

“Some holiday houses I’ve seen are enormous,” says Ashley Dunn of Dunn and Hillam Architects. “But all you really need is somewhere you can cook well, and a place where people can gather.” Their Dogtrot House on the South Coast of New South Wales is a neat solution for a family of four avid campers. The brief was to create a permanent structure that would emulate the communal, immersive feel of the camping experience. The two pavilions are divided by an open, but sheltered corridor, or ‘dogtrot’, creating a permeable structure. Though modest in footprint, these include space enough to sleep 14 people, if necessary.

In the front room, secure storage boxes at the perimeter house swag mattresses made to fit on top, turning generous bench seating into raised beds. A veranda opens out towards an estuary an lagoon, creating a place for visitors to sit out of the wind to feel as though they’re outside. “No matter what the weather is like, you’re engaging with it – whether you’re moving between rooms, or just having a quiet cup of coffee,” says Dunn.

The positioning of the house on site was a key consideration. Sitting with its frontage towards the fall of the land, its inhabitants are able to access surrounding views, while remaining closed to the rear and protected from weather coming over the slope. Its strategic elevation means that the house is above the gaze of passing stickybeaks, so visitors to the Dogtrot House are able to live in an open way without compromising their privacy.

Similarly, on a rural property in northeast Victoria, the Tintaldra Cabin by Modscape generates a sense of peaceful seclusion. Built for a travelling client who would only inhabit the space for half the year, the brief called for an unobtrusive structure. “Most of the time we spent on site with the client was about getting the positioning just right,” says Jan Gyrn of Modscape. From a siting and visual point of view, the dwelling needed to be relatively nondescript to deter any unwanted visitors while the property was vacant.

To achieve this, the closed rear of the building faces the road, while the outward-looking frontage, complete with deck, projects towards rolling hills beyond. Clad in recycled corrugated iron, in the vernacular of the Aussie shed, the cabin appears at home in its setting, receding into the landscape. By contrast, the interior of the small-scale dwelling is crisp and clean: a simple frame for the expansive views. Tintaldra Cabin is completely off the grid, with energy from solar panels on the roof, heating via a fireplace and rainwater tanks on site. “It is almost a romantic notion – that it’s a true getaway where you can operate all year round without any reliance on any sort of authority,” says Gyrn. Being specialists in prefabricated and modular solutions, Modscape provided the architectural design service as well as being able to do the bulk of the build off site. “Modular is an easy way of delivering in a rural setting,” says Gyrn. “It can sometimes be tricky for the different trades to get access to a tricky site, but prefab resolves that quite well.”

Limited space requires consultation between the architect and client, in order to distill function down to its fundamental elements. The Tintaldra Cabin provides a master bedroom and bathroom, combining kitchen, living and dining areas to form a complete, if compact, home away from home. “Part of our ethos is to challenge the perception of what you really require,” says Gyrn. “What we provide is a quality product designed well, not a quantity one that just gives you space you don’t necessarily need.”

The Woonona Pod by TAKT Studio for Architecture demonstrates the potential of seasonal small space living to improve and contribute to our permanent residences. The family of four had no room for grandparents visiting from the UK during the Australian summer, resorting to caravan parks to house their guests. The clients pooled their resources and approached TAKT to come up with a solution that could keep the family together. What began as a standard granny flat evolved into a more integrated, imaginative structure. “They decided that they wanted to do something special,” says Katharina Hendel of TAKT, noting that the client had championed their bespoke, compact solution. “They could have built cheaper, and bigger, but they really wanted a custom little project.” Impressively, the space, though small, exudes a generous, airy quality. The large windows on its north-facing side contribute to this, as well as a continuous glazed panel overhead that runs the length of the building and creates a permanent view to the sky.

The owners were very hands on and did a fair bit of the work themselves, with parents, sisters and nephews pitching in to get the job done. By condensing the space and including features that displayed the character and personality of those within, TAKT tapped into the family’s collaborative spirit. A closer look at the colourful kitchen splashback reveals an impressive Lego wall, a project for the big and small kids of the house.

“When they came to us with the Lego idea, we said, ‘Really? Are you sure?’” Hendel laughs. “But it was a fun idea. So eventually we told them, ‘okay, but you’ll need a good set of colours!’” A Darth Vader Lego set was duly purchased to appease the architects with its requisite quota of black bricks.

The family were on site to help with odd jobs, including the assembly of the affordable IKEA carcass specified by TAKT as a structure behind custom facia, to avoid the expense of in-built joinery. They were also involved in the charring of posts and beams, a solution to weatherproofing and making uniform the mixed hardwoods supplied. “The design is about the rhythm and sequence of spaces, and we wanted that to be readable from the outside,” Hendel says. The posts create a strong pattern and give a graphic form to the exterior.

What Hendel is most satisfied with is that TAKT were able to extend the function of the original brief. When vacant, the Woonona Pod becomes the family’s second living room – they practice yoga there in the mornings, and hold the occasional party there. “It’s not just a guest quarters that is closed when the grandparents are away – in many ways, it has become a retreat in its own right,” says Hendel. It has also sparked the clients’ enthusiasm for small spaces. They are now contemplating the addition of a modular office on site. As we approach the season for packing light, perhaps there are lessons we can take home from our travels about the joy and satisfaction of consciously living light.