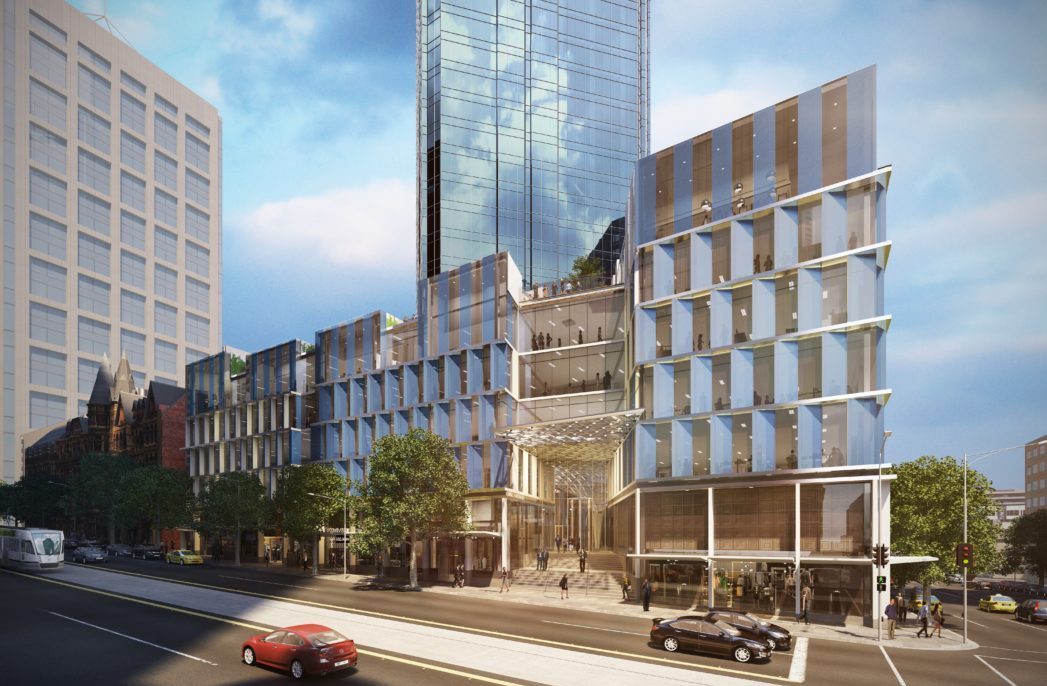 At the time of its construction in 1986, the Rialto tower in Melbourne’s CBD was the tallest office building in the Southern Hemisphere, standing 253 metres. It sat in prime position on the city’s edge, however in the 30 years since its construction, the CBD has extended significantly and has left Rialto situated in the new mid-town district.

This, combined with the natural ageing of design, has meant that the tower has become in need of a facelift. With its $200 million refurbishment now well underway and due for completion in eight to 10 weeks, ADR speaks to Rialto joint owner Lorenz Grollo about the massive project.

“We’ve been working on this refurbishment for 10 years,” he says. “Getting everyone involved to commit was a challenge. We’re dealing with a 30-year-old icon, so to get the design right and the financing right and precommitments met in order to press the button and go was quite the challenge.

“We went through 10 different architecture firms with about 30 different schemes over the past eight to nine years and we decided to go with Woods Bagot as our headline architect. We’ve also used them as our main design firm for the rest of the tower in terms of upgrades, and a number of office fitouts have been done by other firms.” 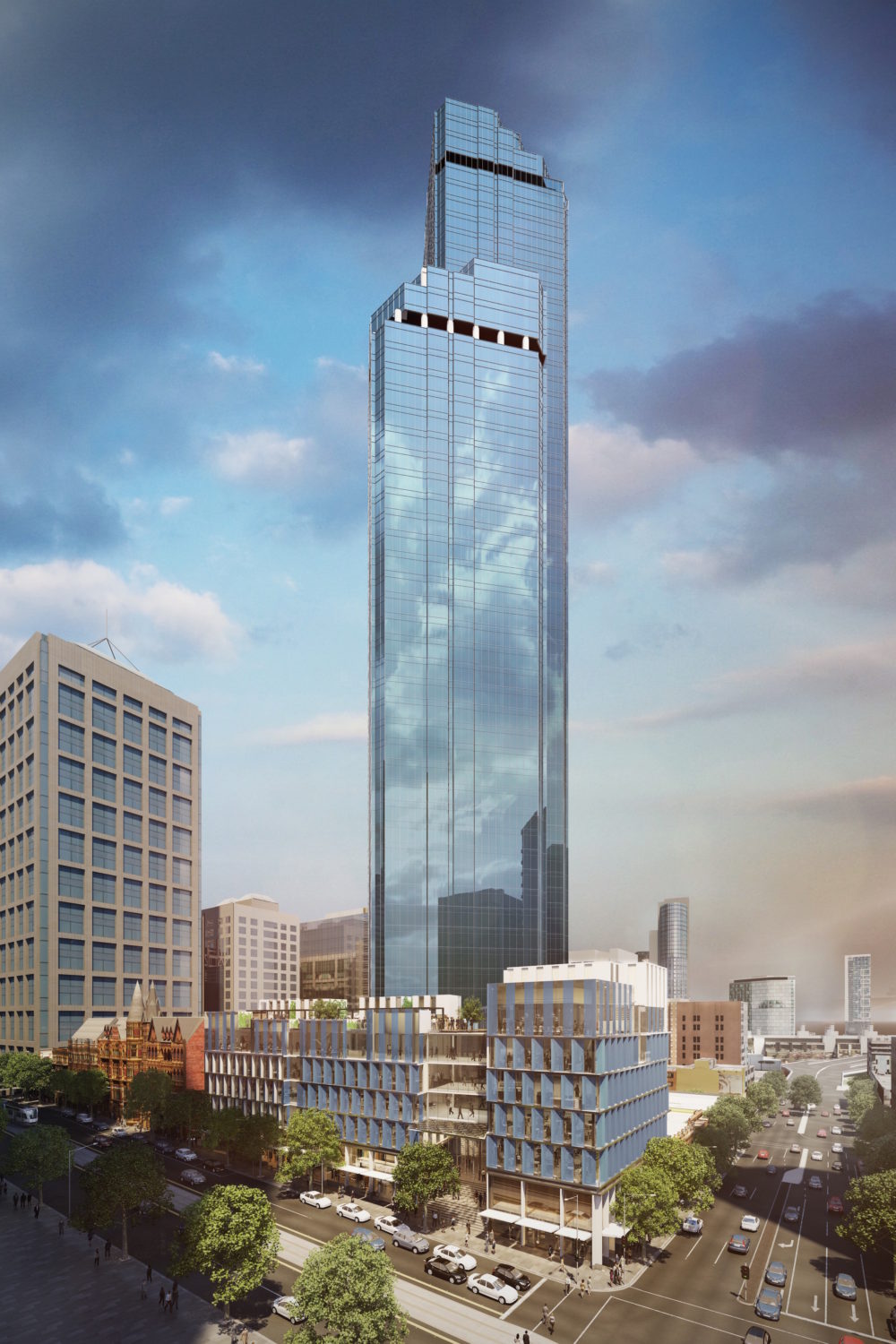 The spend includes a $100 million refurbishment throughout the tower, including upgrades of full floors, lift lobbies, toilets and the entire lift structure ($27 million is being spent on that alone), as well as the addition of an extra 5000sqm of office space.

The main focus, however, is on the ground floor, which includes a huge push on street activation. “The entire public realm of Rialto will change,” Grollo says. “In the past, it was a very vast, open, ’80s office foyer. We are now making it more intimate, very architectural, and making it more akin to an airport terminal rather than an office foyer. It will be a highly active place where people can meet informally, where we can have pop-up events, exhibitions, and so forth. That’s how we plan to operate the building going forward.” 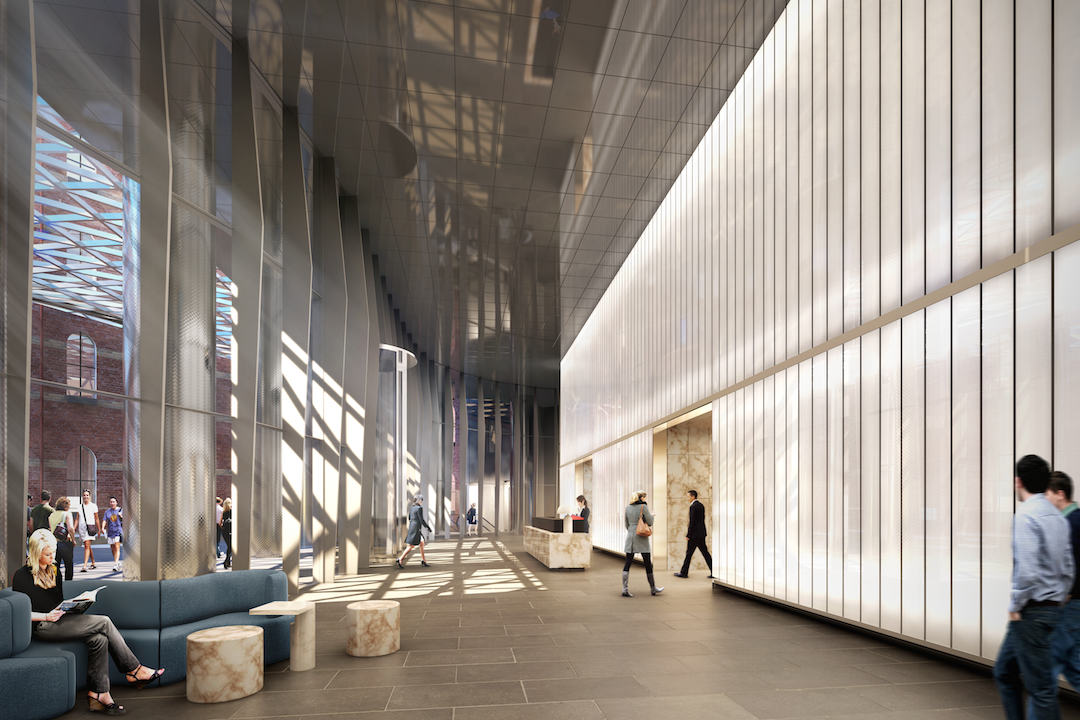 The new ground floor will feature retail stores wrapped around the front, along with food and beverage outlets. That will then flow out to a grid shell canopy, a glass structure that will have the ability to be illuminated. “The canopy will make the precinct feel very international,” says Grollo. “It will be used as a semi-public realm. We’re expecting to have a lot of food and beverage outlets there too, and to use it as an exhibition space with programmed events which will activate the space.”

Aside from its height status, the Rialto is also widely recognised for its blue glass façade. Since the expansion of the CBD, however, the tower lost its defining position and thus Grollo decided it needed to be reoriented at the ground plane. 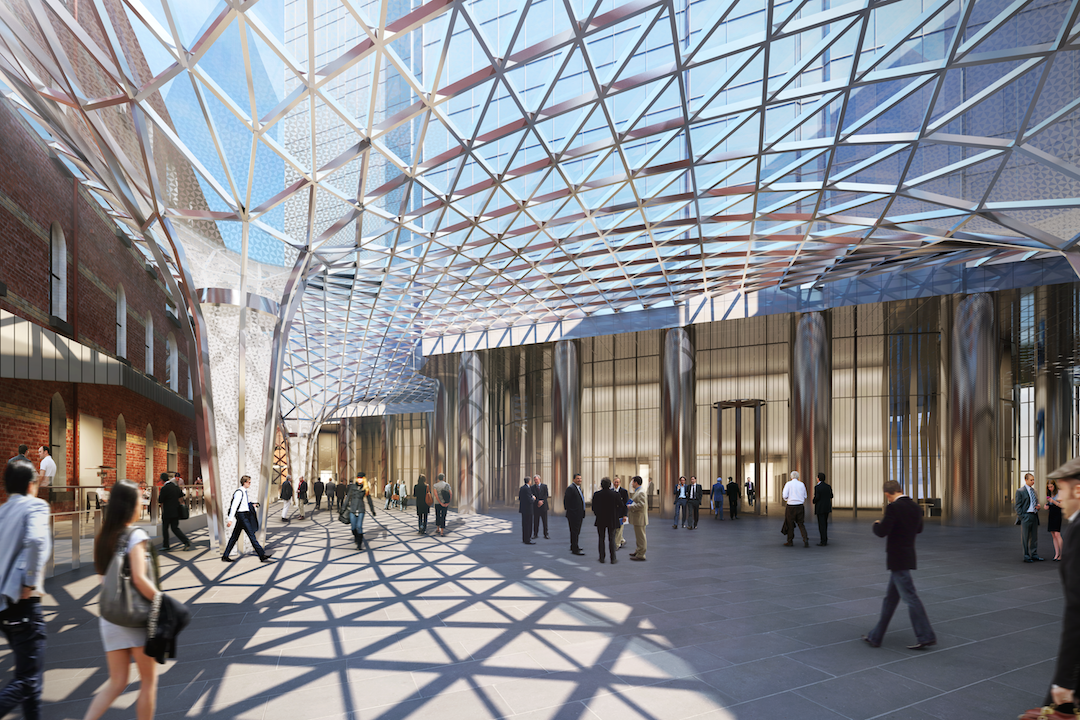 “We want to bring Rialto to Collins Street; bring it to the ground level from a pedestrian perspective. We want to ensure that if you are on the street, you will be able to look up or ahead and know that you’re in the Rialto precinct,” explains Grollo. “So, an element of the design brief was to bring the blue glass down to Collins and King street.

“We now have a curtain wall, or a glass façade, that wraps around the building and is angulated. It sits over four levels. The prerequisite for this was to get a blue glass that is very similar to the blue glass of the current structure.”

The glass used is double-paned with a blue metal mesh that sits between the panels, so a lot of natural light is let in and tenants are able to see out, while from the outside, that familiar Rialto blue panel look is achieved. The glass also boasts good thermal abilities. 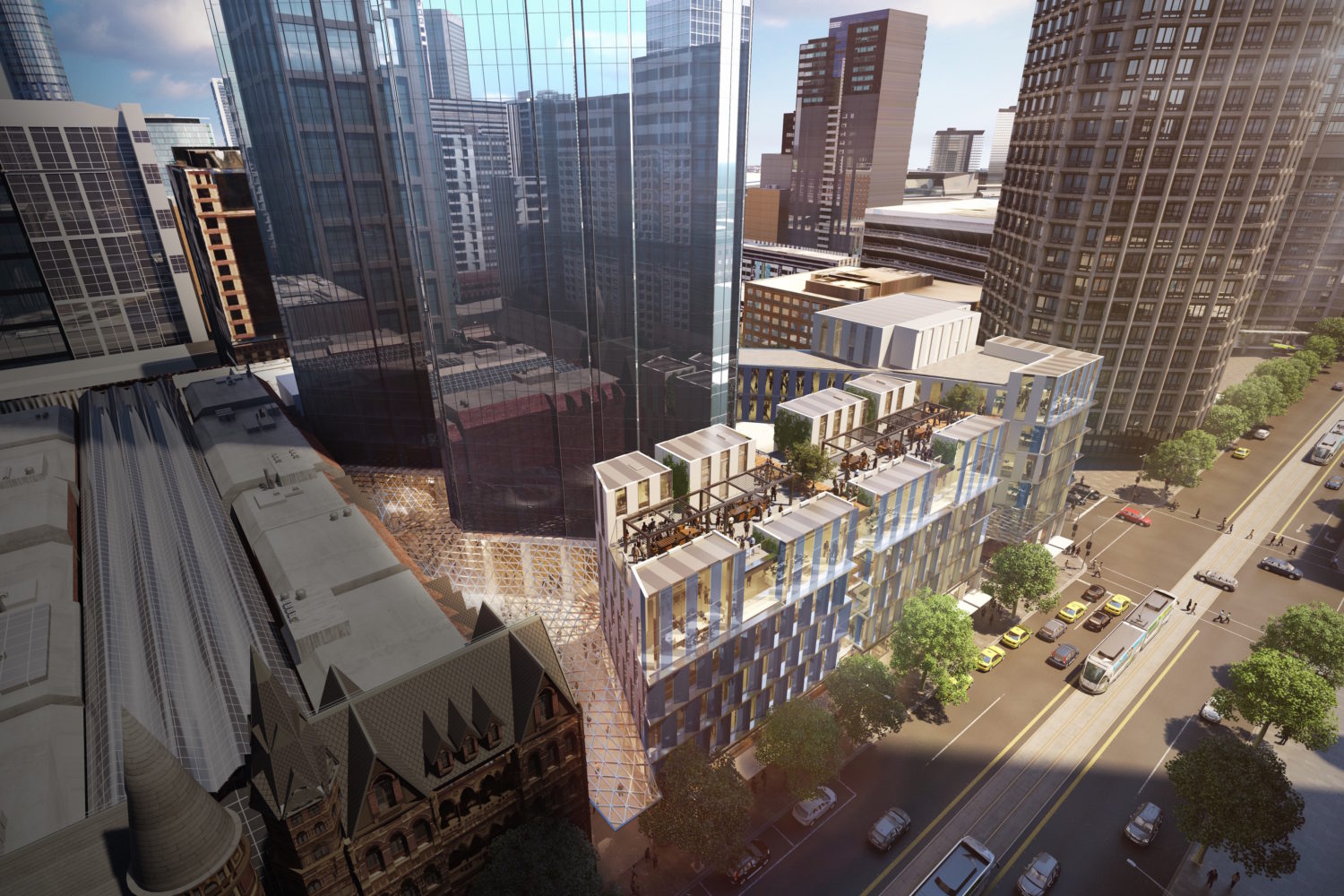 Physically, Rialto’s regeneration has been going for over a year and a half, and with the building at 75-80 percent capacity, the biggest challenge faced was getting everything done without disrupting the tenants. Those on the lower levels were moved higher up the building while demolition was undertaken on the ground floor, a process which “vibrated the whole building,” Grollo explains. “Our tenants have been great though. They’re very excited.”

In addition to its current tenants, Rialto is looking forward to a number of new signees. These include Bank of Melbourne as well as Mercedes-Benz, which has committed to a Mercedes Me store, of which there are only six globally. The Rialto Mercedes Me store will be the first of its kind in Australia. A number of new food and beverage operators will also come to the facility. 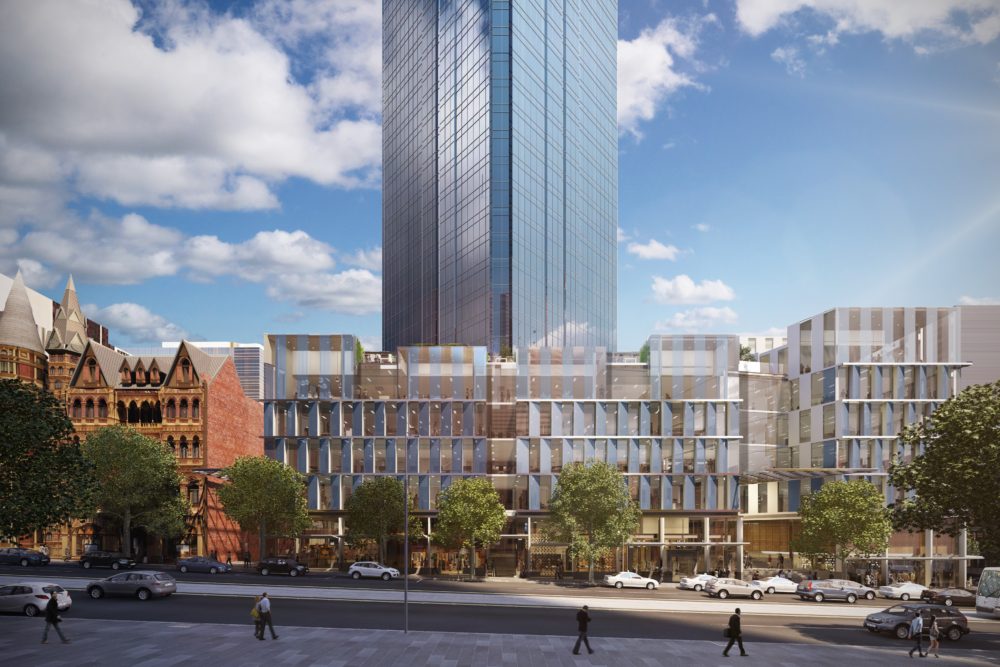 Grollo is passionate about the project and comments that he can’t wait to see everything finished. “It’s really like watching your own home renovations!” he exclaims. “Seeing the activation on the ground floor is the thing I’m really looking forward too, though. Seeing young kids walking past and actually looking up at Rialto and interacting with the ground floor… I just can’t wait to see the bottom of the precinct being more akin to a beehive rather than a cold office space.”

The refurbishment is due to be completed in around eight to 10 weeks and is expected to be completely open to the public in May-June 2017.