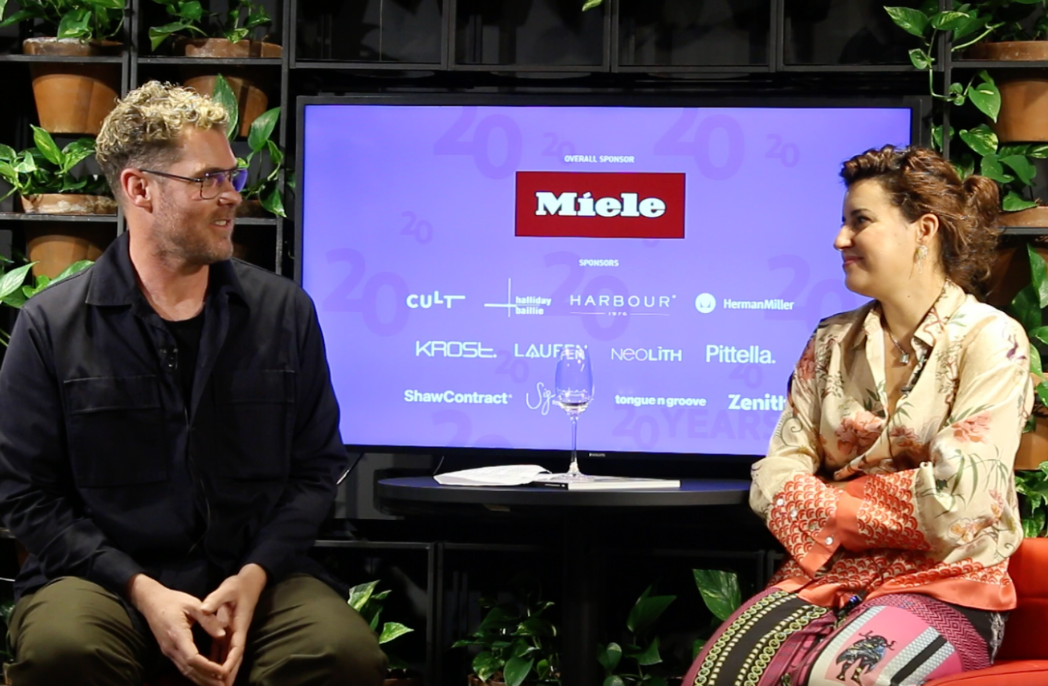 IDEA 2022 launch: The good ship IDEA 2022 is underway! And the wharf from which this year’s awards program was launched? Miele’s glamorous showroom in South Melbourne.

IDEA 2022 opened for early bird entries in March and the program was officially launched on 7 April in the showroom of its Overall Sponsor.

Taking that role for the eighth consecutive year, Miele also hosted the launch event, which saw designers, architects and industry members, including IDEA 2021 winners and highly commendeds, plus sponsors, from Melbourne and Sydney, enjoying tasty beverages, delicious food prepared on the premises and, perhaps best of all, the chance to witness a fireside* chat between David Flack (from Flack Studio) and Yasmine Ghoniem (of YSG), the winners of the Designer of the Year award for 2020 and 2021 respectively.

The pair reminisced about their strong friendship and common experiences, including their first meeting in 2017 when they were both on the shortlist for the NGV Rigg Prize – Ghoniem, as part of her previous studio Amber Road and Flack as founder and principal of his eponymous practice.

Ghoniem was struggling to complete the project in time and many of the others shortlisted, including Flack, pulled together to give her a hand. “It was super stressful and I didn’t think I was actually going to finish,” recalled Ghoniem.

“They were literally about to say ‘you’re out’,” added Flack, “and then all of a sudden, in very Yas style, the record player came on, all the curtains were blowing and it looked perfect.”

Ghoniem also talked about what winning Designer of the Year at IDEA meant to her, the growth of her practice, her response to being told her work is “a little bit too ethnic” and why, when she was teaching at uni, she had students in tears at her ‘really brutal’ assessment of their potential future in the design industry. “I’m not a great teacher,” she said wryly.

Above all she outlined her fundamental approach to the discipline.

“Essentially, starting a new project is about how can I do something that is done over and over again in a completely different way?” said Ghoniem. “And to do that every time, you’ve got to dig a bit deeper.

“If I’m not doing that I feel like I’m failing my clients.”

Flack also asked Ghoniem about the time she gave her biggest competitor the login to her Instagram account and why she was so trusting. She had a great answer.

“If I’m asking my clients to trust me with the biggest part of their life, which is their home, or their business in terms of hospitality, then I’ve got to be willing to trust them. And if someone’s really good at something, I’m going to let them do it, just as I expect them to do that for me. And I do that with my builders, I do that with my friends, I do that with everybody I interact with, because if I don’t I’m not going to get the best out of that relationship.”

Early bird entries for IDEA 2022 are accessible until 1 May. You can enter or find out more information here.

And below is a gallery of shots of the launch event.

* There was no actual fireside, but they did chat in front of a lovely rolling screen of YSG highlights.