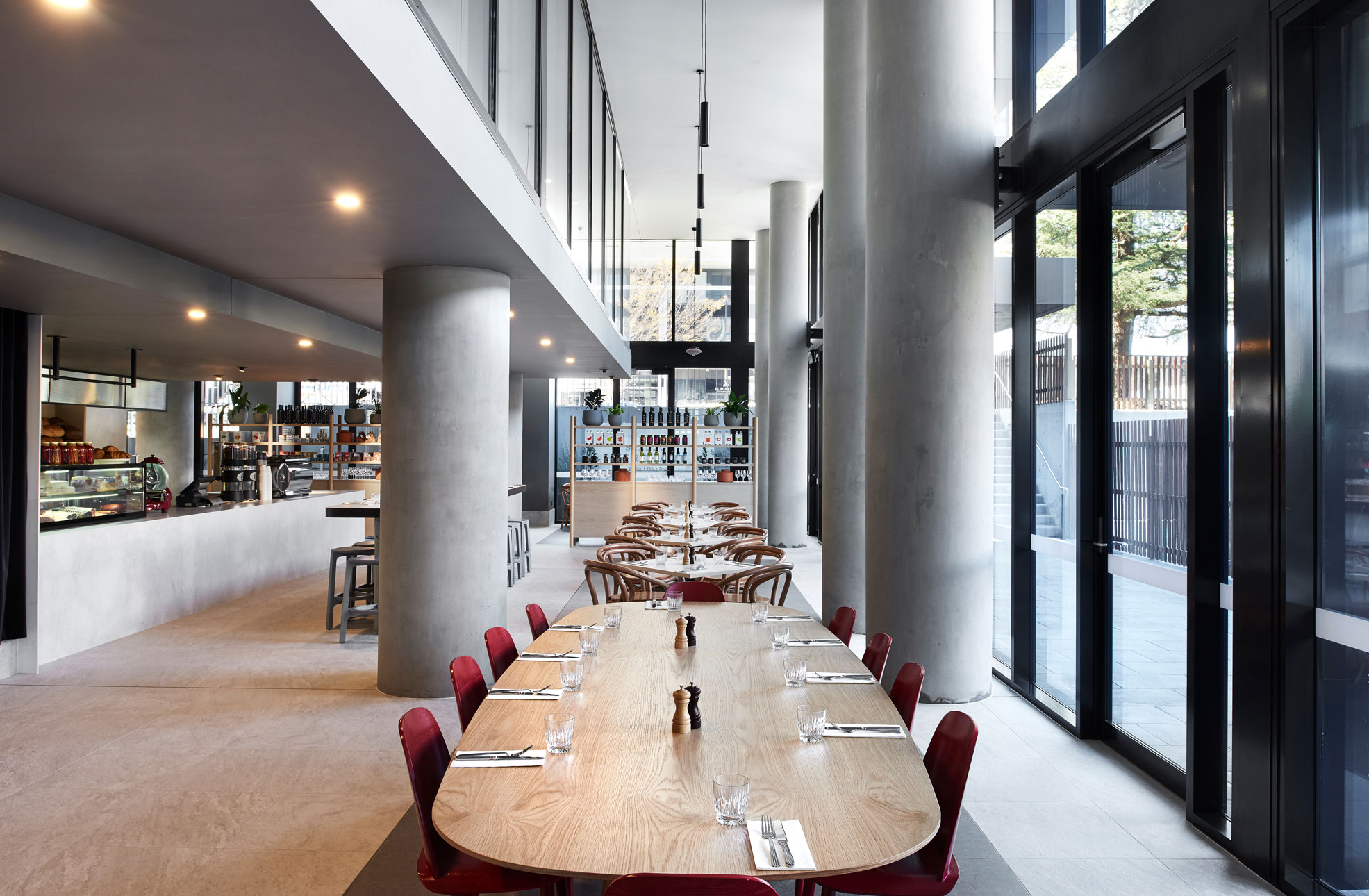 A deceptively simple exterior hides the four buildings that make up the newly opened Midnight Hotel in the nation’s capital.

Designed with Russian nesting dolls in mind, the boutique accommodation and residential development looks like one building from the exterior.

It was a difficult brief for Fender Katsalidis, with the practice working to create a seamless design across the residential apartments, businesses and hospitality offerings nestled within.

Midnight Hotel is the first completed building to have been purpose-built to complement Canberra’s newly operational light rail, and is located in Braddon.

It’s independently owned, but has been accepted into the Marriott International’s Autograph Collection and forms part of the $200 million Geocon mixed-use development.

The interiors are inspired by the hotel’s name, featuring sleek dark tones contrasted with white.

The hotel lobby is located below ground in a feature that Fender Katsalidis director David Sutherland says is deliberately elusive.

“The sunken entry gives a subtle indication of what’s inside. It plays into the ‘after dark’ aura of the entire building.”

From here, guests can sit in front of the hanging fireplaces or take stock from the glass facade, which is crossed on the western-facing side by protruding blade-like elements that extend to give the top of the building its own fabric.

“The exterior offers unique design at each of the street frontages as a response to the character of is locale. This has been done to not only afford a different view of all sides but to show how there are multiple personalities to both the building and the city.”

Braddon is known as Canberra’s ever-changing shopping and foodie precinct with an assortment of boutiques, cafes, bakeries, restaurants and bars.

The suburb is well known for its coffee and is also home to Gorman Arts Centre and a handful of small performing arts theatres.

Midnight Hotel’s restaurant, Braddon Merchant, is a bright, modern deli-style eatery with a relaxed European feel and menu. While Midnight Bar is dark and moody, reflecting the same materials used in the building interiors – polished concrete, glass, metal and brass.

The bar also has a seasonal menu with locally sourced produce and local and international wines and cocktails.

Each of the 199 hotel rooms has a custom piece by New York-born, but Australian-resident Thomas Bucich. The pieces are part of the artist’s ‘Relic’ series and use reclaimed Australian wood and bark plated in copper or nickel, mounted on painted board.

On each of the hotel’s floors, guests will also find bespoke art by Melbourne graffiti artist Tom Adair. One of the pieces, ‘Uncovering Braddon’, is inspired by the neighbourhood.

The black and white palette is constrained in the rooms by block colour furnishings and copper and steel accents, dark wood and marble.

In the internal courtyard, a waterfall accents the 25-metre pool that provides views over the entire outdoor space.

Fender Katsalidis has delivered a number of projects in the nation’s capital recently, including the Nishi building and Kingston Arts Precinct. The practice is also behind Melbourne’s City Mission Frontyard Youth Refuge.