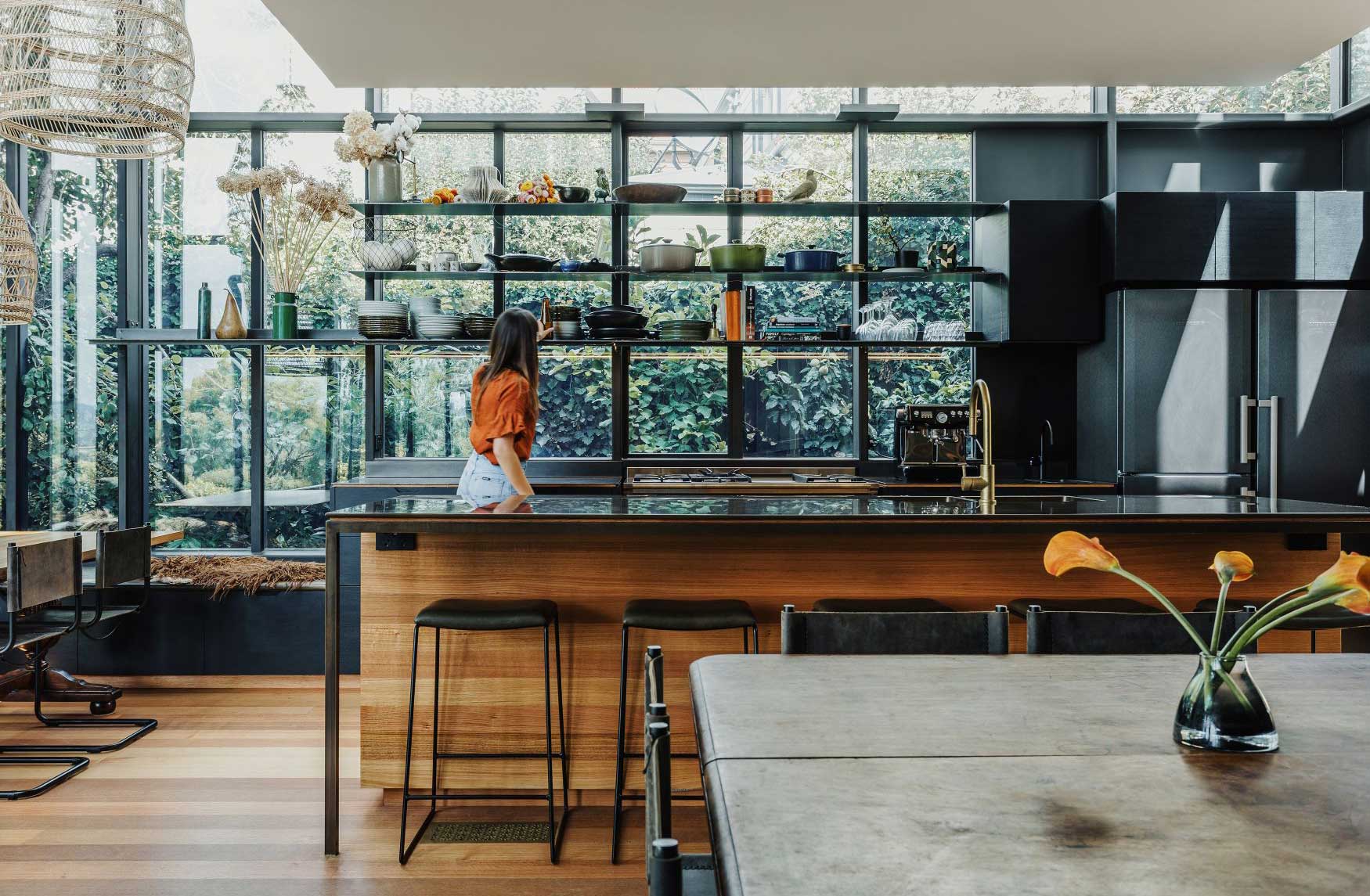 Beautifully restored by Bence Mulcahy, this highly crafted Federation Italianate home in the foothills of Tasmania’s Mount Wellington responds to the client’s desire to live engulfed by the garden in spectacular fashion.

Built in 1900, the Victorian house Culverden in Tasmania’s Mount Stuart had a greenhouse kitchen when the current owners, Bronwyn Fitzgerald and Guy Bylsma, bought it six years ago, but the 30-year-old structure was in need of repair. After living with it for three years, they decided to take action.

“It was romantic in that it had a glass roof, which was quite lovely because we could see the stars, but also incredibly impractical because it was cold, and leaking as well,” says Fitzgerald.

“We were pushed into thinking we had to do something, and the project became much bigger than what we initially realised.”

The couple were friends with local architect Richard Blythe, who lived nearby, and he recommended Sophie Bence, who’d just established a new practice with Shamus Mulcahy.

“We got the sense that they really could listen to us,” Fitzgerald says. “I certainly was invested in the project and had clear ideas about what we wanted, so it was important that we would be heard because, at the end of the day, it’s our house.”

Architect Bek Verrier joined Bence and Mulcahy on the team after an extended pre-design phase. Together, architects and clients arrived at a new two-storey greenhouse, occupying a similar footprint to the previous version, with a new wardrobe and en suite off the main bedroom upstairs.

Two of the key challenges involved increasing the functionality of the space without encroaching on the mature garden, and creating a beautifully detailed glass box that tied back to the Victorian house and its return verandah.

Once the design was complete, the construction phase took longer than everyone anticipated, mainly owing to the complexity of the structural steel with double-glazing.

“Normally you can hide elements and services in walls, but in this case, once the steel was up, that was what you saw, so everything had to be done extremely neatly,” Verrier says.

It also took extra time to make some of the new elements locally, including the brass island bench with an integrated brass sink, which was treated with chemical finishes to look old even before it was installed.

“Fitzgerald and Bylsma had a total commitment for everything to have that handmade feel, so that it would look worn before it went in, which is such a nice approach with a house of that age,” says Verrier.

Fitzgerald says her preferred aesthetic arose both from the era of the house and perhaps also as a purposeful contrast to her work as a medical specialist.

“Anything that feels like I’m in a hospital doesn’t work,” she says. “I can’t do stainless steel or clinical or all-white. I needed it to feel earthy and green, so the brass was perfect because it’s aged to a brown colour, but as it’s getting older, the scratches are golden.

“The palette needed to be calm, warm and inviting,” she adds. “The spinach green of the kitchen and laundry joinery works so well juxtaposed against the lovely old original red brick, which is such a distinctive feature of many Hobart houses of this era.”

The family also wanted their existing furniture to sit comfortably in the new space, including the two dining tables that Fitzgerald had envisaged from the outset.

“We dreamed of two tables as a busy family,” she explains.

“One never seemed enough because the children – now aged 18, 15 and nine – were always spread out doing homework or a craft project on one, and I always thought, ‘Wouldn’t it be better if we had another one that was clear, ready to dine on without the drag of having to pack everything away?’

“Living in the house for three years before we renovated, I realised we needed a warm and cosy space for winter, and a light-filled relaxing space for summer, and we really use it that way,” Fitzgerald adds.

“In summer, we sit in the glass atrium with the basket lights, the doors open and the cool breeze coming through, and people lie on the bench seats.

“The winter table is the old one – from a friend’s farm near Hamilton in Victoria – in front of the fire, so it’s intimate and inviting in Hobart’s dark winter months. And then, when people come around and we have big gatherings, we have kids’ and adults’ tables.”

The L-shape of the addition lends itself to this arrangement, Fitzgerald says, and it’s changed the way they use the greenhouse. “It’s created a living area that people want to be in, and it’s become the central hub of the house, which is not how it worked before.”

The new parents’ retreat upstairs also feels connected to the established garden, with a sculptural bath at tree-canopy height, taking in views of the Derwent River below.

“The en suite is filled with light, so when you are having a shower in the morning, you’re facing the sunrise and it’s terrific,” Fitzgerald says.

“It’s also dynamic. If you’re lying in the bath, you may see a cruise ship coming in, so you feel part of the comings and goings of the city, even though it’s very private, and I really do love that.”

This upper level addition is a hit with the children too, especially the internal window they sometimes climb through during games of hide-and-seek.

“It’s a great fun and interesting house,” Fitzgerald says, “and it’s a very good house for parties. When we open up the big steel doors, people can flow in and out very easily.”

The renovation feels entirely appropriate. Verrier says: “The minute they moved in, it felt like they’d been there forever,” she recalls.

“Bron is really creative – she’s got a great design sensibility – and we had a very clear alignment, so it just felt lived-in straightaway. The fact that the garden was established meant that – as the build was finished – it was already surrounded by greenery.

“Of course, we designed for that, but we didn’t appreciate how much it would feel like you were dining in the garden, with the light qualities, the presence of cypress pine; it just all works.”

“I love seeing the seasons framed by the black steel,” adds Fitzgerald. “It’s golden in autumn and over where the stove is I have a constant succession of my favourite flowers. Bence Mulcahy understood that this project was all about connecting to the beauty of gardens, hills, sky and horizon. This kitchen dining space is utterly functional, but also such a joyous retreat.”

Sophie Bence and Shamus Mulcahy formed Bence Mulcahy in 2014. The Tasmanian studio is based in North Hobart. bureau^proberts added a similar glass addition to a Brisbane cottage recently.