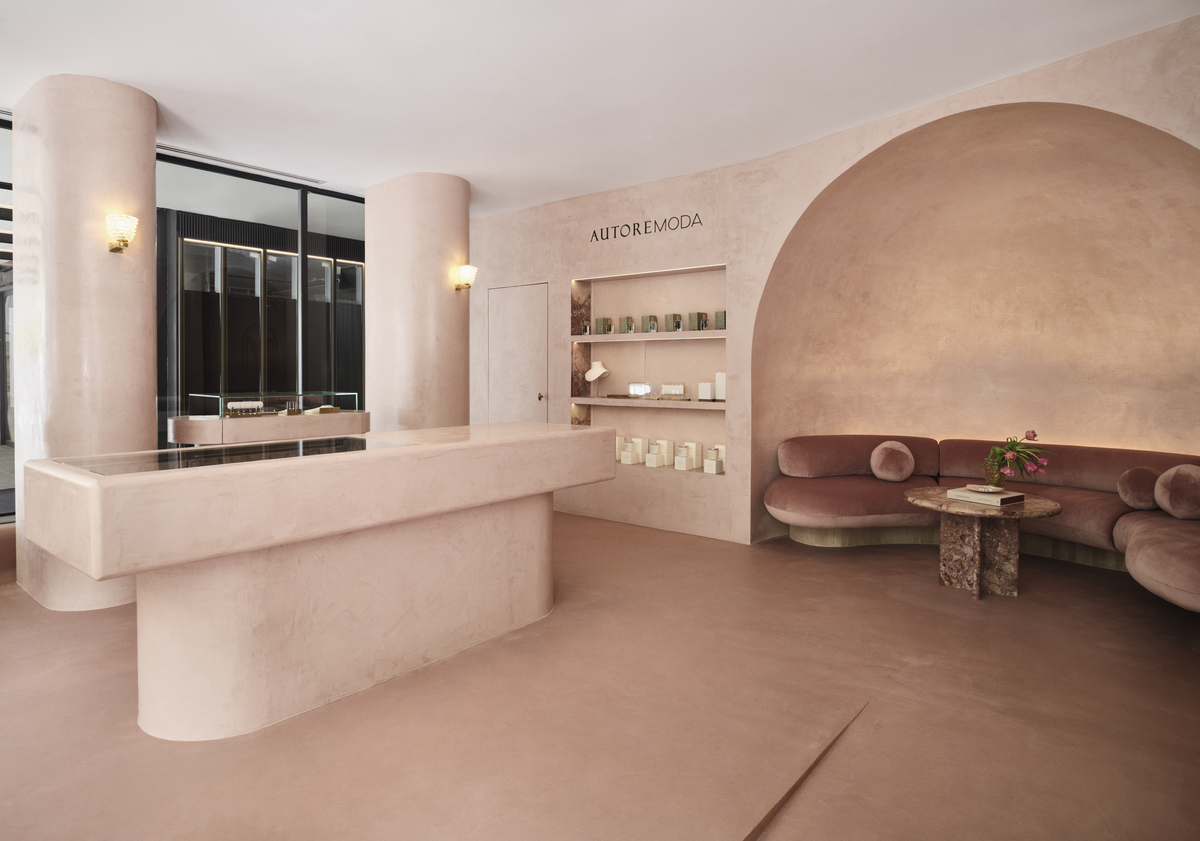 With the brief to create a “resort-like escape” that referenced the lustre of South Sea Pearls, Autore Moda by Alex Morrison Interiors is a curvaceous banquette of textured pink hues.

And this was no accident. The client, who is also a childhood friend of Morrison and the founder of Autore Moda, wanted to forego the traditional narrative associated with pearls and delve into a more youthful and light approach.

“In the beginning, my client told me that when you typically think of pearl jewellery, you think of your grandma or perhaps the Queen wearing a decadent strand of pearls,” explains Morrison.

“She wanted to change this narrative and create a space that reflected the contemporary style and aesthetic of the jewellery house’s DNA.”

The space feels more like a relaxing lounge space than a typical jewellery store. The interiors guide customers out of their surroundings and into the pearlescent world of Autore Moda through soft tones and elegant materials that honour the South Sea Pearl.

“The interior space follows the curve of a pearl’s shell,” says Morrison on her design.

“The space is also curated with layers of minimalist shapes covered in textured hues of pink and terracotta that reflect the brand’s identity.”

Encased in plastered Marmorino walls and velvet fabrics, the space invites penetrating light to play around the space, and most importantly, illuminate the luminescence of the pearl against the deeper custom-coloured micro-cement floor.

Moving throughout the store, customers are able to admire the jewellery that is framed in pink marble with aged brass detailing and moreish Venetian plaster. Morrison also installed a large floor-to-ceiling mirror that rests on the inside of the front display to enlarge the perception of space.

And in continuation of the ‘Pearl’ theme, Morrison heavily references rounded forms in the interior silhouette, such as the curved hand-finished columns and alcove.

“The alcove’s lustre and form represent the inside of the pearl shell, lined with a curved velvet banquette scattered with pearl-like sphere cushions paying tribute to the overall concept,” explains Morrison.

“We were looking at domes and curves in different ways when we came across the idea of an alcove and drew inspiration from the beautiful design feature in Richard Shapio’s Malibu home and the Proper Hotel in Santa Monica.”

Reflecting on the design process, Morrison says the primary challenge was the size of the store and existing structural obstacles.

Once again, Morrison found direction in the pearl to solve this.

“The idea was to capture the curve of the alcove and build a wall that aligned with one of the existing mullions to create a storage room.

“We embraced the existing columns and used them as a lighting feature to divide the window displays. We also decided to include lower window displays on the side of the store, which prevented the space from feeling small and claustrophobic.”

The final result is a decadent and secure space that evokes the best in luxury retail shopping.

“On a sunny day, when you sit in the curved alcove, the light shines in and the space evokes a feeling of serenity making you feel safe inside the shell of the store whilst watching the people of Sydney pass by.”

Alex Morrison Interiors is a Sydney-based boutique design studio specialising in the design of high-end residential and boutique commercial spaces. While every project is unique, they strive to create spaces that are both intricately beautiful and flawlessly functional.