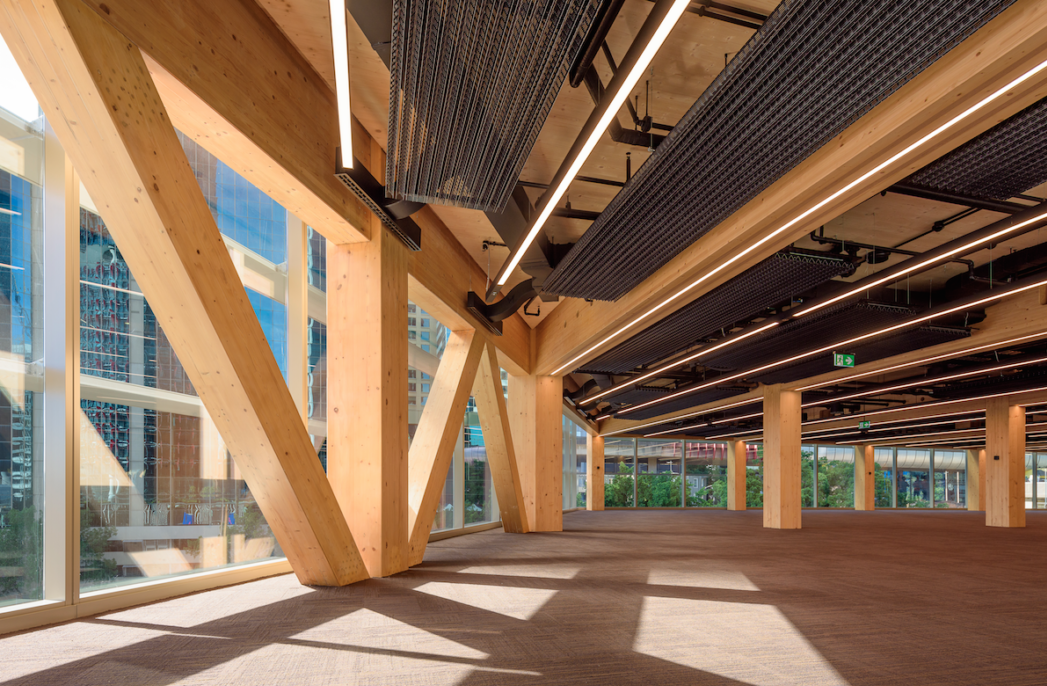 Alec Tzannes and Jonathan Evans are the architects and minds behind the world’s tallest timber commercial building, International House, Barangaroo. inside co-editor Gillian Serisier discusses the thinking and challenges behind this extraordinary achievement with Alec Tzannes.

inside: To start at the beginning: what prompted the use of timber for a seven-storey building?

Alec Tzannes: Timber is one of the very few materials that has the potential to deliver a totally clean source of construction technology – providing, of course, the timber is properly forested, the ground conditions for the forest are maintained, the cutting of the timbers for manufacture is done properly, including no harm to animal life, all of which can be done with well-known and well-established forestry techniques. 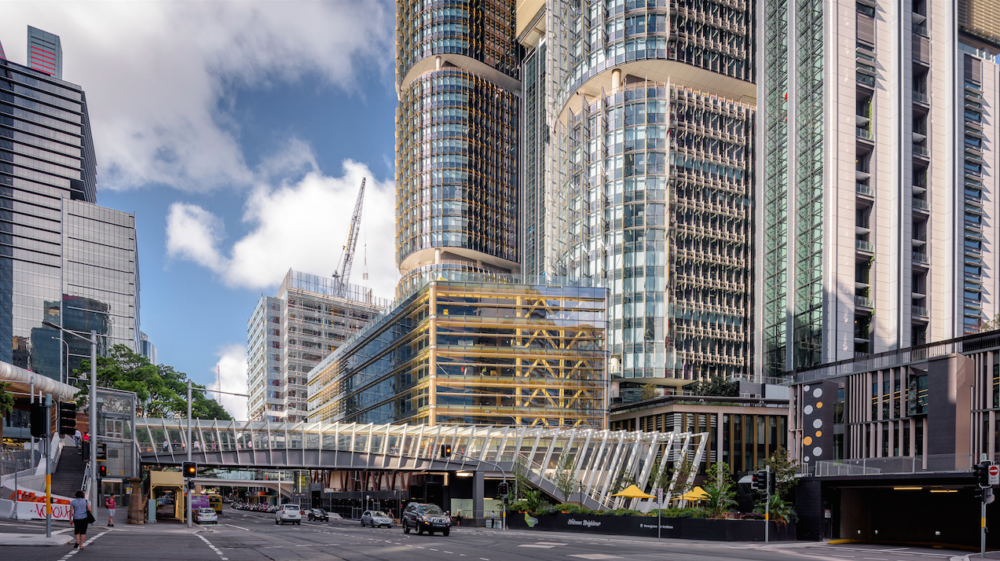 So, assuming we’ve got a very well-managed forest, timber then can be totally clean. Timber was proposed for this building because it was of a scale where timber engineering work had demonstrated that it could be used, to meet structural and fire requirements, and mostly because it was a much lower carbon outcome than a conventional concrete frame building.

First, a cautionary note about the term ‘engineered’ timber. There is a range of timbers that are engineered that do not perform as well, from a sustainability perspective, primarily because
they are saturated with chemicals including formaldehyde and, in my view, are not sustainable.

The timbers we have used are a cross-laminated timber (CLT), which allows solid timbers to be laminated in a cross-ply configuration; they change directions to enhance the strength of the timber.

It is solid spruce, which is a pine from an Austrian forest and grown under proper forestry conditions. Also, it’s a glue laminated timber, which is again using smaller sections of timber to create structural integrity. 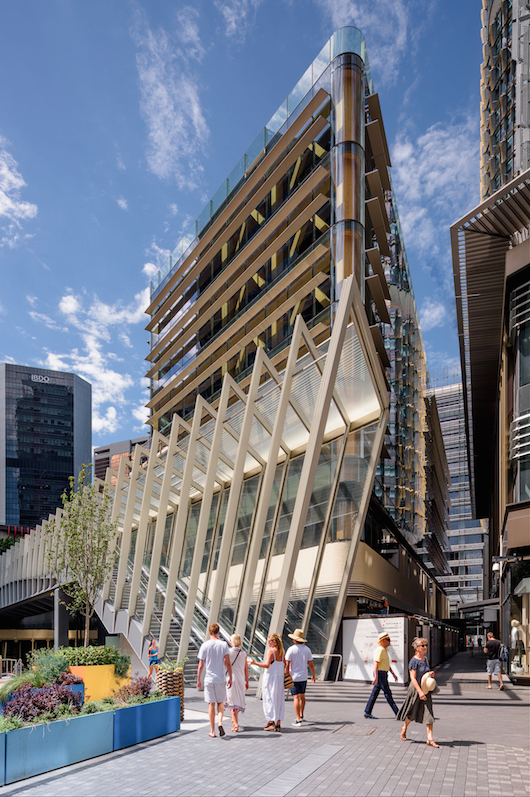 All columns and beams are glue laminated and the core plates are CLT, and all of this timber is used internally with the exception of the exposed soffit of the first floor of the CLT floor. Although, it’s exposed and protected thoroughly, so it’s appropriately used. It’s not timber that can be used externally, and also it’s a timber that has been engineered to achieve a fire rating by understanding the rate at which it burns, and then applying that rate to ensure that an appropriate amount of time is given to evacuate the building before the structural integrity of the timber fails.

Is engineered timber used on the exterior?

The exterior is recycled timber. These were a bridge out of a Queensland location via a recycling place in Kempsey, Australian Architectural Hardwoods. It’s ironbark, which is a remarkable Australian timber that actually doesn’t burn.

Its solid form was used, very importantly, to enhance the articulation of the colonnade of the building, and it’s also used completely and thoroughly, from an engineering point of view, to brace the building as well as carry the vertical load. 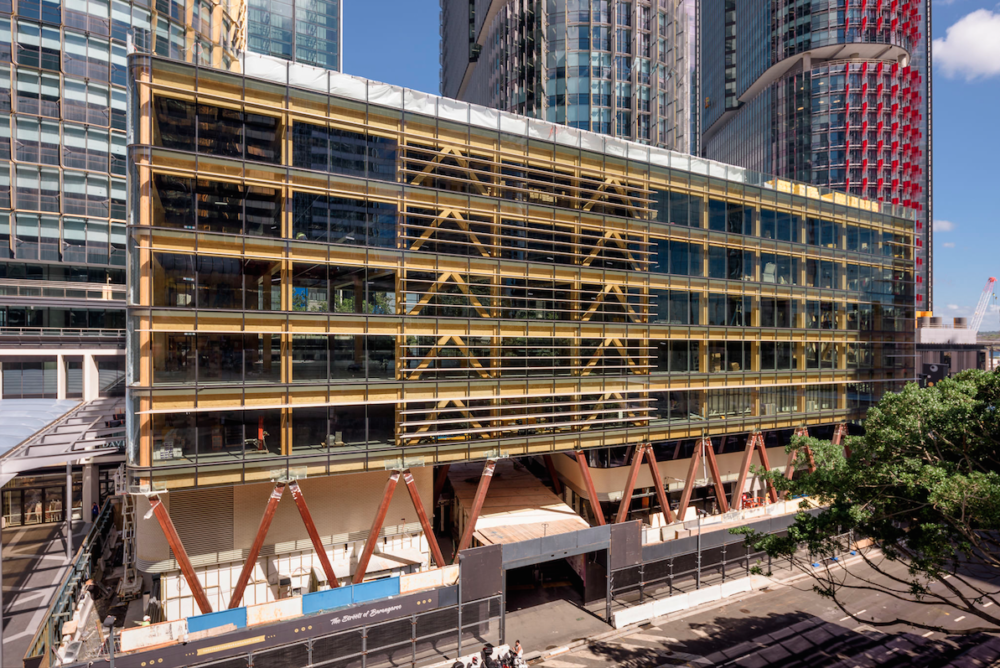 The structural bays, which are six-metre centres, are reduced to a single column at the base with diagonal struts and that transfers the load to the ground, but also braces the building. There is no steel used in that timber; the timber is doing all the compression, tension and shear.

This was engineered, without any steel, and that’s a very important point, because it’s what I call ‘proper engineering’. It’s not just engineering from tables, it’s first principles engineering. Then, the other solid timbers we’ve used are on the soffit of the building in a public domain, particularly over Union Walk and also in the foyers. 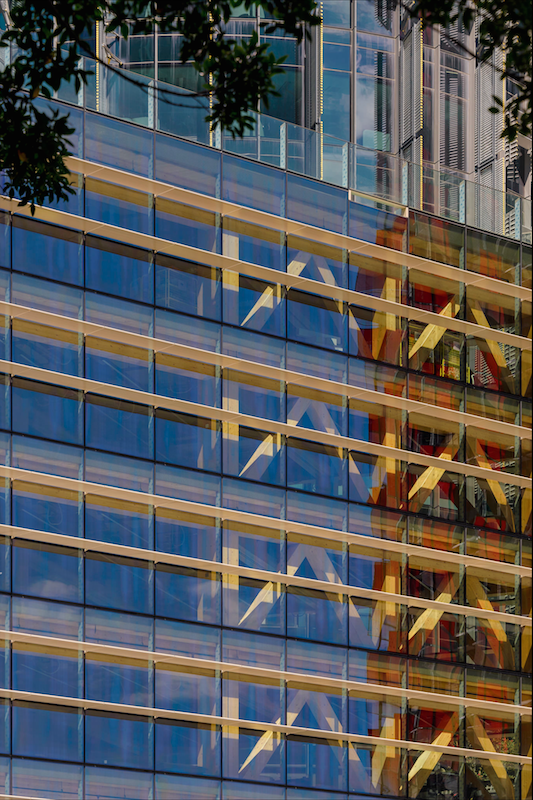 The interior timber is exposed?

The whole building is conceptually a timber building that has the clearest possible glass around it, where you see through and into the building. I’ve just had the experience of reviewing the interior designs for the people who have leased the entire building and they are very respectful of it and I am very happy with it, because all of the timber will remain on show everywhere. 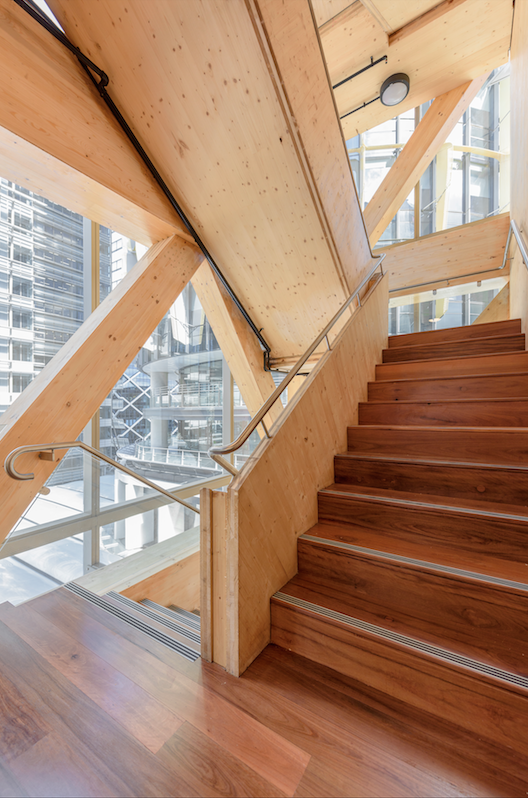 It’s seen as an asset to the interior and it’s been treated, in a sense, as if it was a Heritage item. That’s important because it looks beautiful, but also it has a light aromatic perfume, and if you compare that to plasterboard and the low emissions you get from concrete and other materials, it’s healthy.

You’ve touched quite a bit on engineering, but were there any major challenges with council?

In this case the council was not involved. This was all processed through Barangaroo Development Authority, which was highly supportive of this level of design, both for the way it responded to reinforce the urban morphology, or the character if you like, of Barangaroo, as well as it’s sustainability credentials. If there was a seven star we’d have it, it’s a super high six, it’s beyond – it’s off the radar in terms of sustainability. 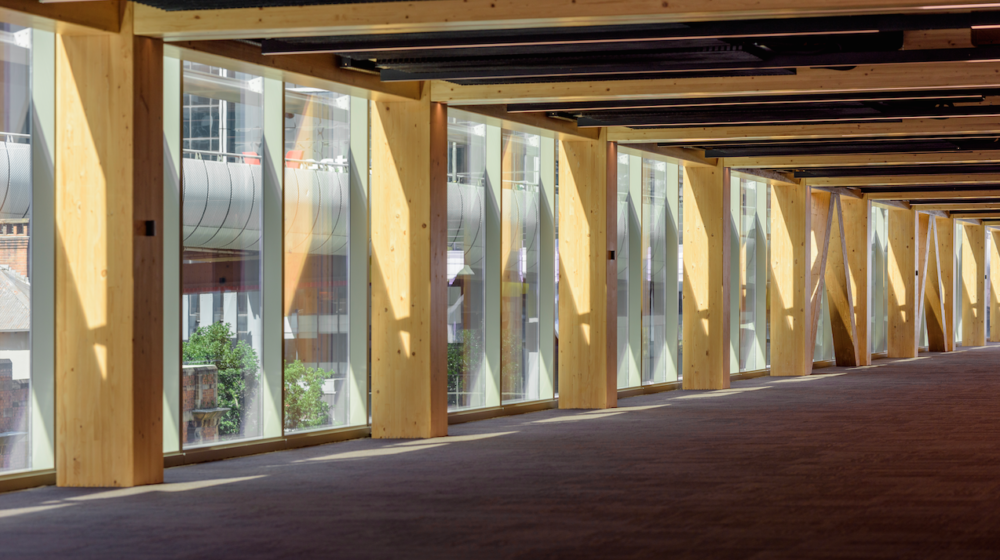 Your client, in my opinion, is extraordinarily brave. Did you convince them of it, or was it something that they were running with from the beginning?

The client was brave. From the very start, we were commissioned to do a concrete building and we introduced the idea of using timber and we struck a chord with the development manager who, perhaps paraphrasing his words, said that he really understands concrete and he hates it, it’s an environmental disaster, so he would encourage us to explore it.

Lend Lease broke with the conventional developer’s risk profile by commencing the building before it had sold the building or leased it. In order to do that it created an entity that isolated this development as a financial package from other assets.

So it took on a huge amount of risk with new investors who believed in the building and also believed in a lower carbon future and this building’s contribution to it, so these people
were brave. 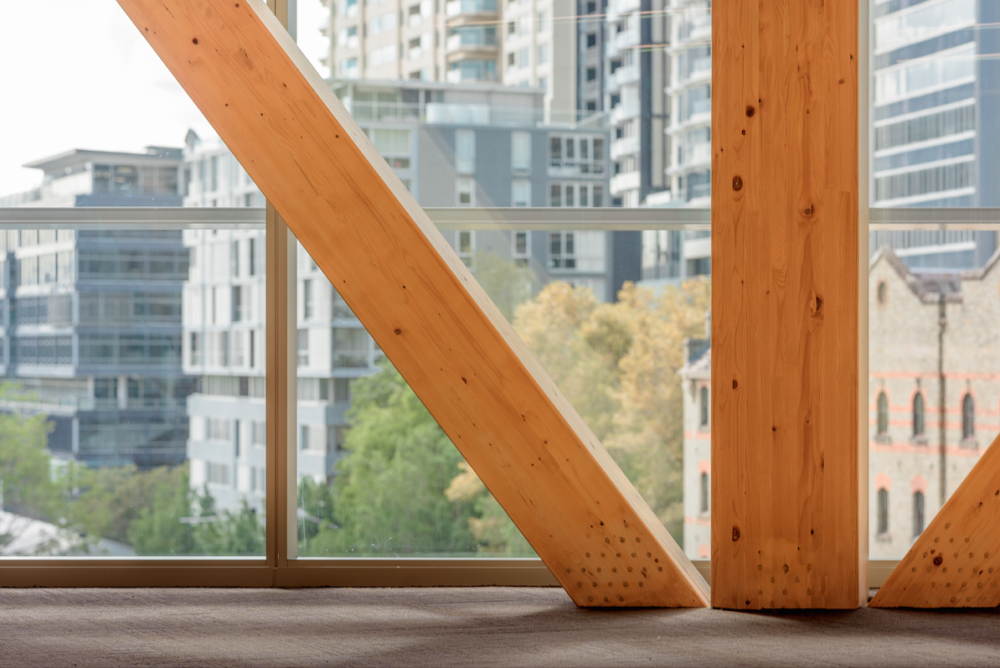 World firsts are the domain of the brave. Is commercial more difficult than residential?

With residential buildings you’ve got an apartment every 4.5 to nine metres and you’ve got cross walls. They’re all to stiffen the building, because with open plan commercial building there’s nothing to stiffen it.

Now, this building could have gone up to 10 or maybe 15 storeys, which is currently the sort of limit we’re talking about, and it didn’t because of the height controls. The height was set by the planning controls, not by the technology in this case, although it’s the highest commercial building in timber in the world at the moment.

We’ve been commissioned to do a second building and, unlike this experience of having concerns about finding a market, Lend Lease tells me it’s virtually pre-sold. So, the barrier to investing in timber appears to have gone, and also it’s caught the market’s imagination, so the interior qualities are now seen to be an asset not a liability.

If the market is accepting timber, then this technology could be used in the future for a very high volume of construction irrespective of the design, and that would lower the carbon significantly in
the world. 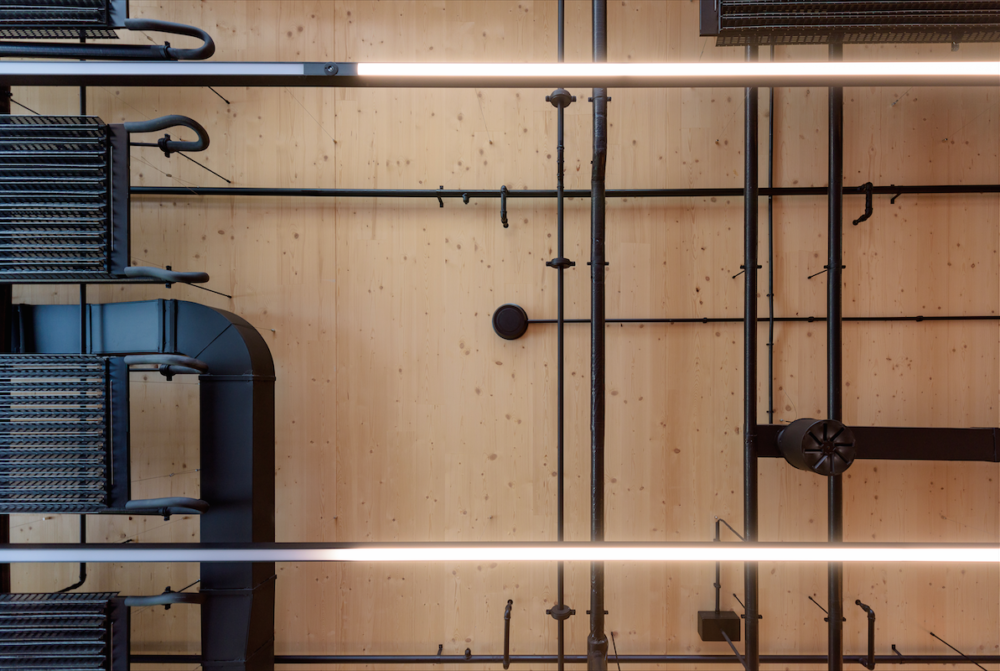 What has made the world ready for this kind of design?

One was to discover that the modernist experiment failed to produce great places, and the other was the exciting and liberating tool of the computer, which allowed us to create geometries and shapes that were previously unbuildable – the great example being the 1957 drawing of Jørn Utzon, effectively a parametric geometry, which today would be very simple and even when it was built, by the time it was finished, it was not buildable, it had to be reduced to simpler Euclidean geometry.

What International House does is reflect the most advanced technology available. For example, the column bases in concrete are a gorgeous transformation of a rectangular into a circular shape. It’s using those advanced digital design tools to create the polystyrene formwork to make those columns possible; it would be impossible without the technologies. 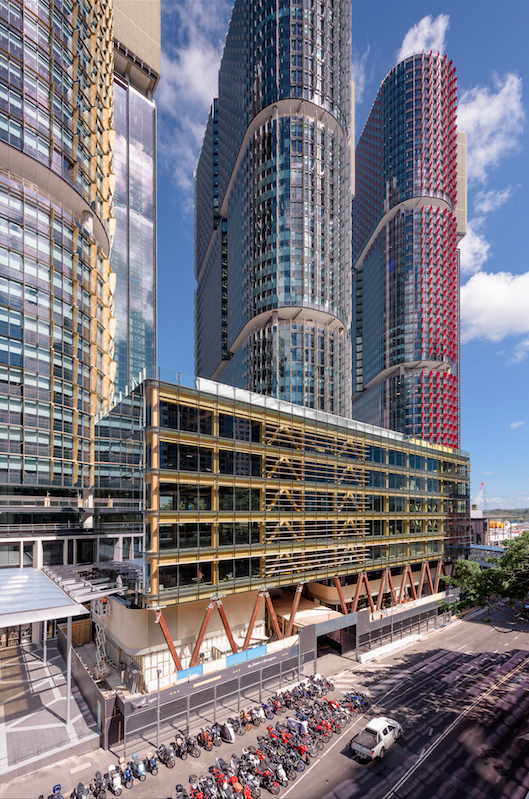 The second point is, this building is not just about timber – this building creates urban experiences that enhance the public environment of Barangaroo. To understand this building – if you just talk about it as a building you’ll be missing half the point.

The way the curves are formed, the way the architecture is made and articulated from bottom to top and sideways, all has a connection to things around it as an architecture. It’s not about itself, and that’s the key to architecture being community minded with social purpose.

This article originally appeared in inside #97 – available here, or digitally through Zinio.

Read more about the use of timber in high-rises here.

Latest issue of inside magazine out now!