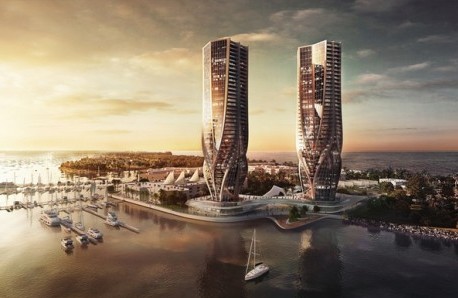 Sea World has objected to London-based firm Zaha Hadid Architects’ design for the development of a $600 million twin tower complex on the Gold Coast.

Including 370 apartments, a boutique hotel, and over 800 car parks, Sea World has claimed that the construction would bring disruptive and “extreme” traffic to the area. The theme park argues that a lack of infrastructure will leave more congestion than is already experienced in the area. It its objection, the park’s chief operating officer, Bob White, explained that during peak holiday season, it can take visitors to Sea World between 45 and 90 minutes to drive from the park to the Gold Coast Highway. The argument sits that the towers will only make this worse.

This is not the first time that the architectural firm’s designs have caused controversy. After being selected to design the stadium for the 2020 Tokyo Olympic Games, ZHA’s plans were scrapped. Citing rising construction costs, the Japanese Government found the $2.7 billion stadium no longer plausible, and suggested they may go back to the drawing board. With much public criticism being voiced since the design’s announcement in 2013, many feel that the rejection was well overdue. Despite this, the firm did not take the decision lying down, and created a 20-minute movie detailing the importance of their design. Arguing that starting with a new concept would not actually save money in the long run, the firm has also since stated to Dezeen magazine that Japan doesn’t “want a foreigner to build…a national stadium.”

With ZHA’s designs for the 2012 Olympics Aquatics Centre in London and the Quatar 2022 World Cup Stadium both also receiving criticism due to their grandiose outlooks and over-the-top costs, one has to reflect on the fact that fantastic architecture not only requires visual appeal, but also practicality.