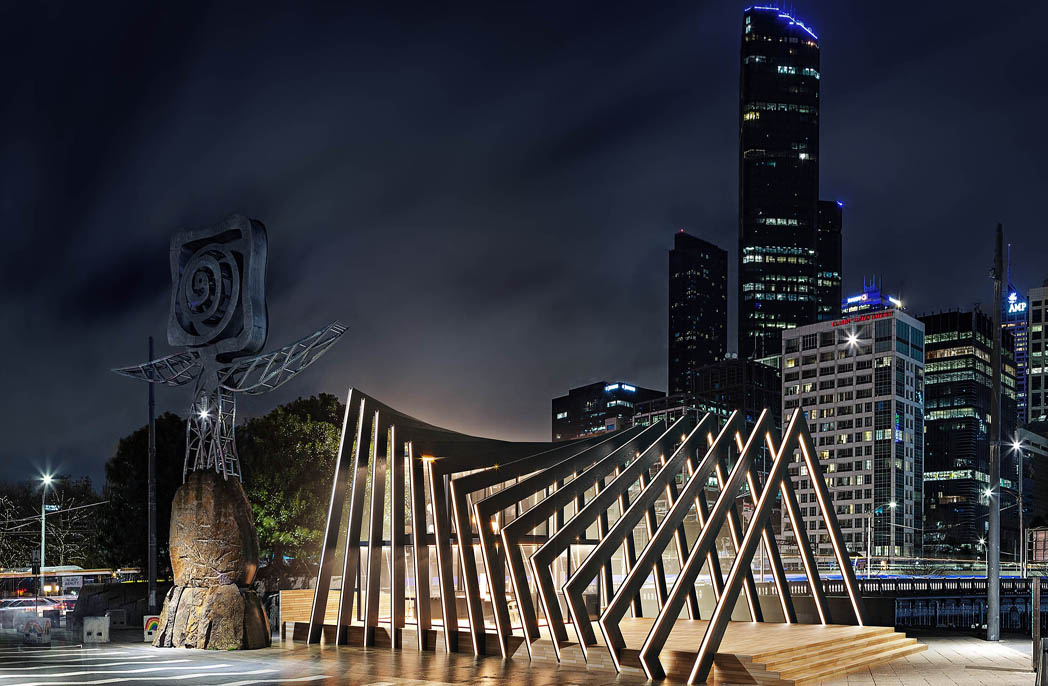 Melbourne’s Southbank waterfront will play host to a pop-up sculptural pavilion for a week in July and will house six international architecture teams as they present their vision to transform the Southbank precinct.

Located in front of the red steps, the Beulah Pavilion is designed to be an ephemeral structure that will hold specific events as part of the Southbank by Beulah architectural competition and the Future Cities symposium.

As well as being a public sculpture, for two days the pavilion will also act as a unique presentation room for the teams, who will present their final design concepts for the Southbank by Beulah competition within the glass box.

The architect behind the design, Samson Tiew from ODO (One Design Office), says the pavilion is designed to represent the city being in a state of constant motion and change.

“The pavilion utilises concentric frames to capture how iterative progress can be seen as a sculptural outcome where visual interest is formed through the static capture of motion,” he says.

Whirled around a common axis, the frames are lit by programmed lights to further emphasise movement.

Having purchased the Southbank BMW site in a record deal last year, Beulah International intends to transform the site into a $2 billion plus mixed-use lifestyle precinct. The precinct could potentially comprise of residential, retail and department stores, a gourmet food and market precinct, a 5-star hotel, designated commercial spaces, and cultural and public spaces, with hopes to attract global tech names such as Amazon, Google, Microsoft, Apple, and Samsung, to create an experiential technology hub within the precinct.

The pop-up Beulah Pavilion will be visible from July 25 to August 1, with the six shortlisted designs available for public viewing following the Future Cities Symposium from July 27 to August 1.