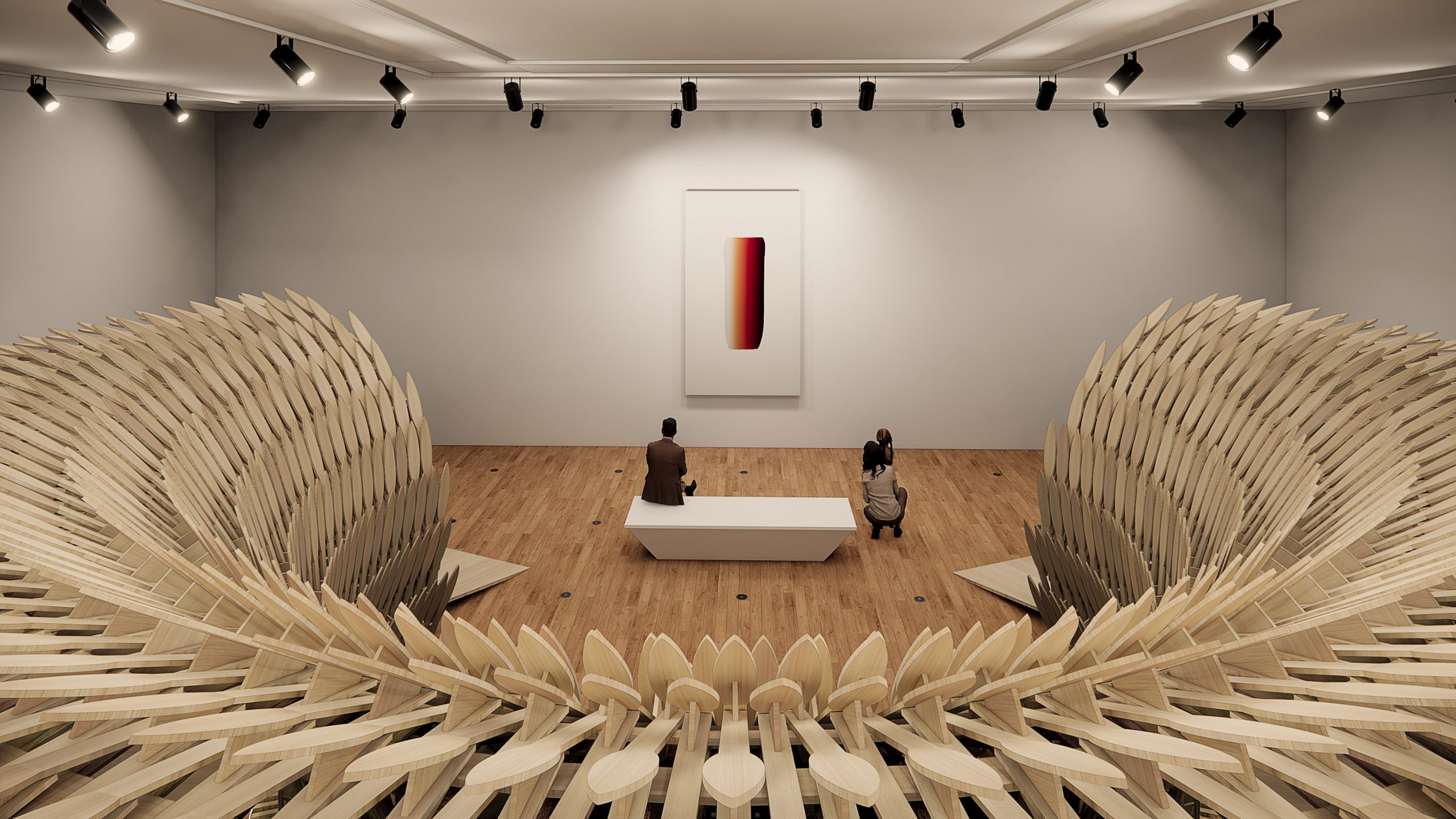 Artist Geoff Nees has teamed up with Kengo Kuma to create a gallery-scale circular timber pavilion for the upcoming NGV Triennial.

The architecture installation, which will be on display at the NGV Triennial in Melbourne from 19 December, originally drew inspiration from the facade of the Australian Pavilion at The World Exposition 2005, on which Nees worked with studio505.

It was initially designed to sit in Melbourne’s Royal Botanic Gardens and would have made use of the trees that had fallen in the area.

“I was looking to create a design project that had significant relevance to its site,” Nees tells ADR.

“Not just a design exercise, but something that had inherent meaning and relationship to where it was situated.”

When these original plans fell through, Nees shelved the project for a couple of years until an opportunity arose to collaborate with Kuma for the NGV Triennial, incorporating elements of Japanese architecture into the redesign.

“There are a lot of examples of temples and other buildings in Japan that have their own little forest plantation, which they use to source the timber for rebuilds and other structural works,” he explains.

Made in the Japanese tradition of wooden architecture, the Botanical pavilion is an updated iteration of Nees project, making use of the Botanic Garden’s trees as originally intended.

But rather than sit within an outdoor landscape, it’s now located nearby, within the NGV gallery and cocoons a piece from the collection – Lee Ufan’s Dialogue.

“The pavilion itself was always designed to be a space for contemplation,” explains Nees.

“At first glance, the visitor won’t be able to see anything but the timber pavilion. They actually have to traverse through it in order to come out and admire the work.”

The choice of Ufan’s paintings was not serendipitous. The Korean minimalist painter and sculptor artist is known for his philosophical writings that challenge prevailing notions of artmaking with attention on the spatial and temporal condition.

He has exhibited widely in Japan and across Asia, and is recognised for his unconventional artistic processes which underscore the relationship between the viewer, the artwork and the spaces they inhabit.

Botanical pavilion responds to the philosophical nature of Ufan’s painting, while also reminding us of our relationships to nature and one another.

“Originally, the pavilion wasn’t set up to regard another artwork, but in this iteration, we were invited to consider how our structure would regard Ufan’s work and I like the way they fit together. You walk out and the painting is in front of you in what is, I think, a really nice conceit,” says Nees

“It turns out that Kuma is actually friends with Lee Ufan, so that adds another element to the correlation between the two works.”

Described as a sensorial walkway through which to approach and contemplate Ufan’s painting, Nees and Kuma’s work is made from a series of leaf-shaped interlocking pieces held together by tension and gravity.

Nees believes the shape and the skin of the pavilion are at the heart of his collaboration with Kuma, combining his love of tessellation in patterns with the architect’s passion for reinvigorating traditional elements for the 21st century.

“It was very important for the viewer to see my hand in the piece, so we worked very hard to incorporate the elements that I was interested in into the structure that Kuma envisioned.”

Botanical pavilion also makes a statement about prioritising natural phenomena over scientific order, with the botanical species arranged by colour rather than any taxonomic order.

This decision was partially made in the hope that the pavilion would tour Australia and the world in the future, picking up timber from its travels “like stickers on a suitcase”.

But it’s also a statement against the reductive nature of science during the colonial era, which was often at odds with many Indigenous cultural beliefs and knowledge systems.

“Within the structure is, for example, a coastal banksia tree that was over 300 years old and was in the garden prior to colonial settlement,” says Nees.

“So there is a precolonial story within the work as well. And it’s important to regard that rather than just pay homage to botanical classifications.”

The NGV has commissioned 30 new works for the NGV Triennial, featuring 87 projects by more than 100 artists, designers and collectives from 33 countries.

Botanical pavilion is on view at the NGV International in Melbourne from 19 December 2020 to 18 April 2021.