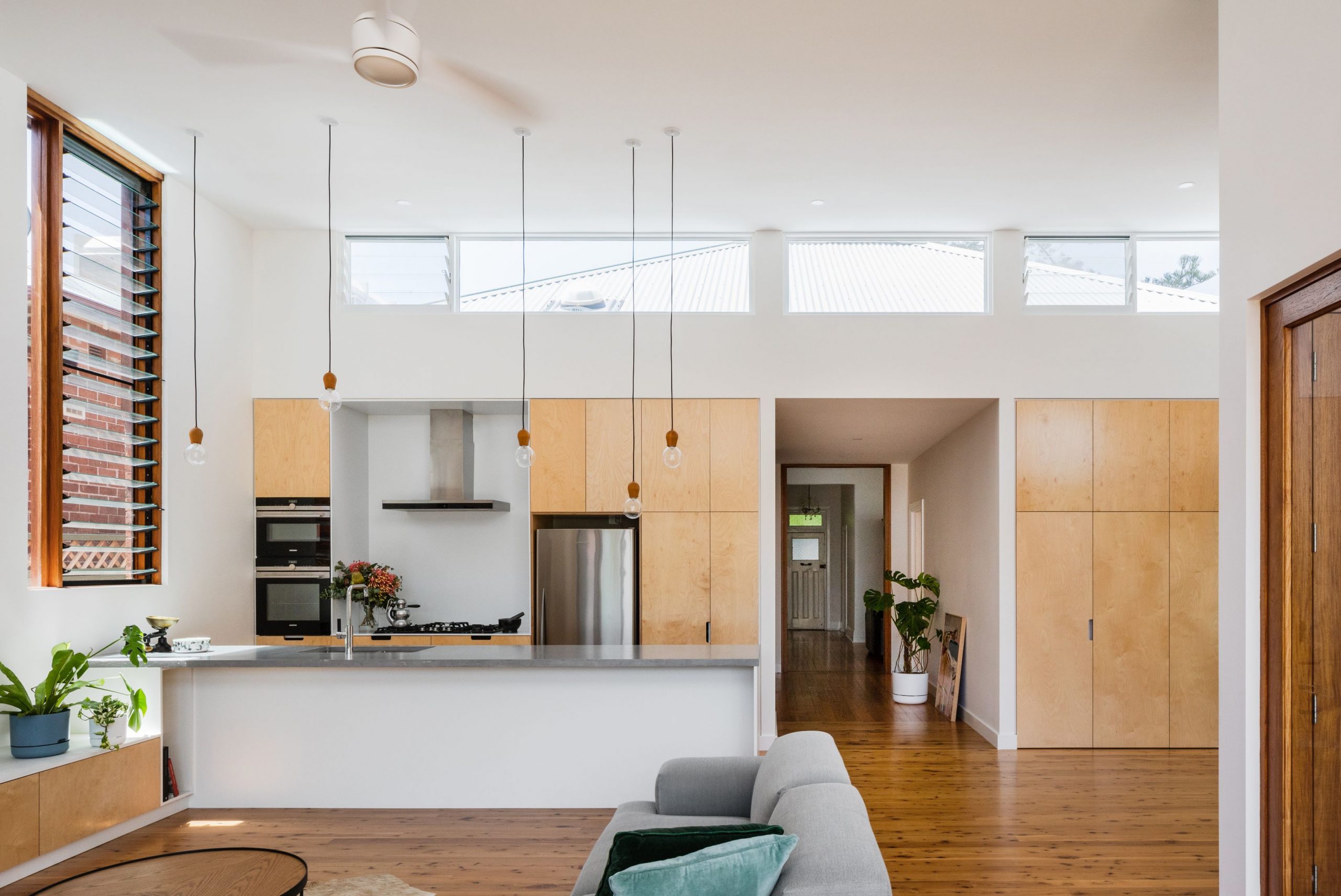 The project included Heritage and sustainability considerations, retaining all of the historic brickwork and reimagining the space with a contemporary rear addition, an external timber veiling and a new flood of natural light.

ADR: What were your ambitions for the project?

Warren Haasnoot: The budget was relatively tight, so from early on we were trying to be very practical about the way we put the project together. We understood that if we minimised the number of walls that needed to be constructed or moved, we could spend less there and invest in other details. So we worked with the existing plan as much as we could.

Going through the client’s brief, they wanted to have that connection to the yard and plenty of natural light. It was in a Heritage area, which we had to consider as well. This particular Heritage control meant that the addition had to be recessive – a diminutive element within the context of the existing building. So all of the work had to be below the rear building height. Materials had to be contextual. The exterior timber came in because that was part of the DCPs (development control plans) that could be used on the façade of the addition.

Can you describe some of the transformations that you enacted on Parry Street?

WH: The clients freshly purchased the project when we became involved. The person who had owned it before had made a bit of a rabbit warren of the planning to turn it into three dwellings.

Greg Lee: What this meant was that there were three kitchens and three bathrooms. What we realised was that the client didn’t require extra floor area, so we kept within the existing footprint. Because of the orientation, what we did was provide a new roof to the rear section. It was about trying to keep intact a lot of the front part of the house and, as you move through to the back, to open up the living areas to both the light and the yard. The high ceiling provides an immense sense of volume. The compression and darkness of the old building really contrasts with the new addition.

What sustainable interventions did you make to the property?

WH: The addition there was to the south-west, which is a really difficult orientation. We carefully mapped the pattern of the sun and that established the shape of the rear addition and the roof. This allows light to come in when required, but it also protects from the hot afternoon sun – so it’s about understanding the environmental conditions. Also, not adding extra floor area, maintaining the integrity of the existing building, retaining existing structure rather than demolishing it. We do push clients a lot more for alterations because you can often find a lot more interesting solutions than trying to build from scratch. The existing building gives you something to respond to.

What was the most successful aspect of the transformation?

WH: The additions to the roof were imagined as a very simple box. But we started to carve away at the box to allow light in at some areas and to protect from the sun in others. The orientation has an east-west quality, and the light in the mornings and afternoons is therefore so much more dramatic than through the middle of the day. Careful consideration of placement of windows enables these opportunities to connect with those moments of the day.

You have said that design can be a transformative process without necessarily being an additive one. How do you navigate keeping the integrity of a space and also necessarily changing it?

WH: I think that goes back to this idea of respect – for the craft and quality that went into the original building. This original building dates back to around 1910. The quality and texture of the bricks is incredible, as are the original ornate ceilings and the decorative glass. They may not be contemporary, but they certainly portray the craft and care and love that went into manufacturing, which a lot of the materials we have to work with today are quite often devoid of.

Curious Practice is a Newcastle-based studio led by Warren Haasnoot and Greg Lee.

This article is from Architectural Review 164. If you would like to read the full latest magazine, click here to receive a complimentary copy of our first digital issue.

Also in Sydney this week, Tamsin Johnson pays tribute to Bondi in the flagship SIR. store.

Packed to the rafters – Josh’s place by Custom Mad

The belle of Bondi by Greg Natale