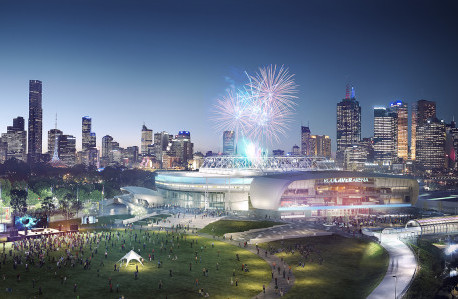 Designs for a multi-million dollar refurbishment and expansion of Melbourne’s Rod Laver Arena have been released.

The refurbishment is designed by COX Architecture and delivered by Lend Lease, and will be the most complex staged arena construction since the redevelopment of New York’s Madison Square Gardens 2008, according to Alastair Richardson, director of Cox Sport.

The project will involve a reskinned façade, a new eastern annex which will be become the main entrance, new food and beverage outlets, including outlets on the floor level, upgraded bathroom facilities, and increased disability access.

While Rod Laver was originally created to host tennis – and the Australian Open specifically – the redesign’s key objective is to increase flexibility of the venue.

Back-of-house improvements will allow bigger and better shows to come to the arena, such as a larger, more efficient loading bay that will allow concerts to be set up faster and increase the number of shows, the roof loading will be increased to accommodate more complex set equipment, and rigging capacity will be increased to accommodate the largest blockbuster shows.

The upgrade is part of the $338 million second stage of the Melbourne Park redevelopment, aimed at enhancing the sporting precinct. It will also include a pedestrian bridge over Batman Avenue creating a walkway from the CBD to Melbourne Park.

Originally designed by Cox Architecture and Peddle Thorpe in 1988, the redevelopment of Rod Laver is focused on retaining longevity and sustainability. “The redevelopment of Rod Laver Arena represents the future of how stadia and arenas built at the beginning of the sporting infrastructure boom in 1988 can have a life for the next 25 years,” says Richardson. “This project represents the key to designing flexibility from the outset and allowing for future growth and changing demands, while keeping the core of the original building fabric intact.”

The basis of the design has been brought together through “an acute understanding of the existing ‘bones’ of the building and what is needed to re–life for the opportunities and challenges of the next 50 years,” he says.

“In an age of austerity and environmental responsibility, it is imperative that we do more with less and re-examine how we can re-life our buildings.  The Ancient Greeks and the Romans once did just that, so we can learn from the past to once again provide a better, more sustainable future.”

The Arena will remain operational throughout the refurbishment, with new extensions being opened progressively over the course of construction. The project is expected to be completed in 2020.