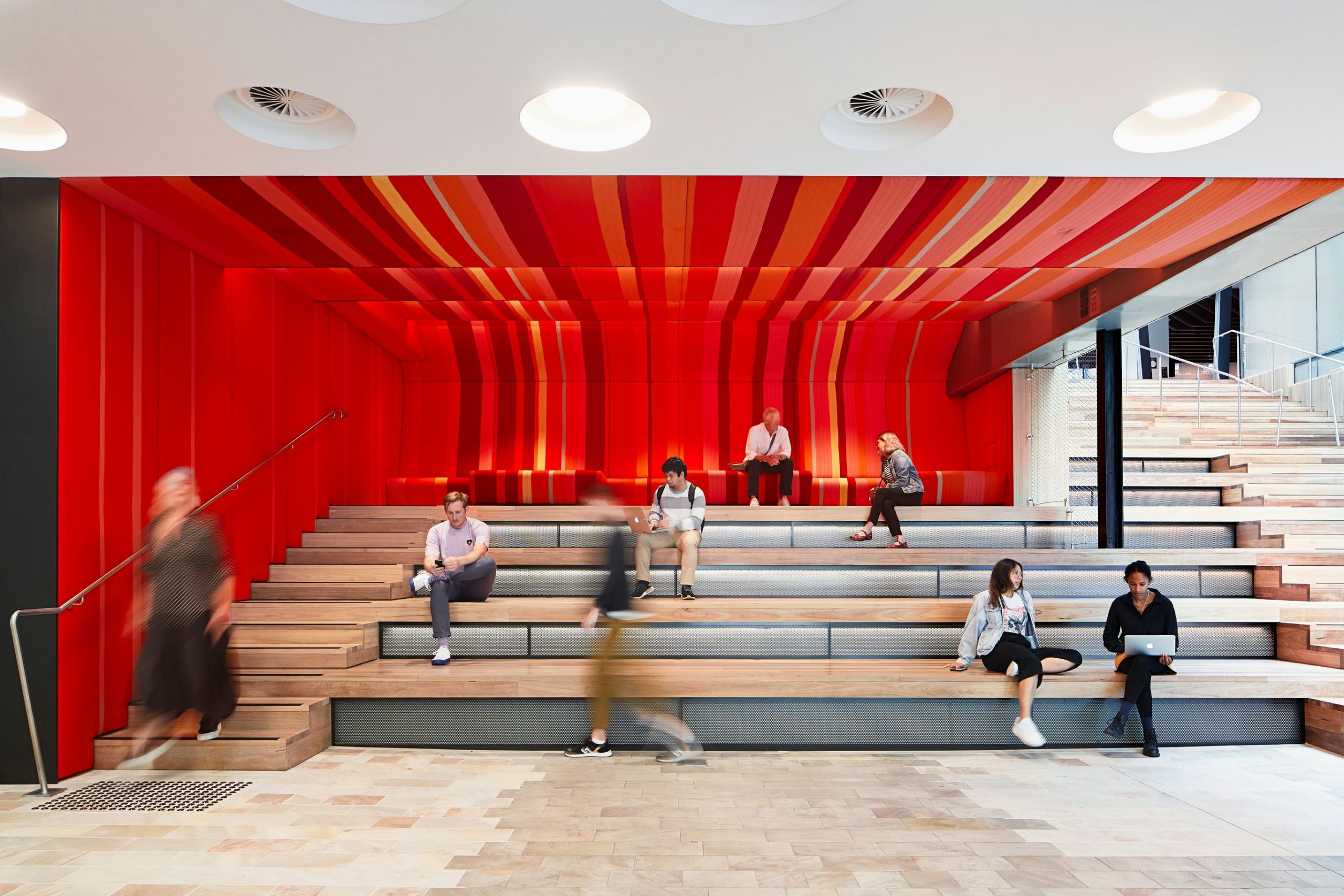 BKK principal Tim Black speaks to ADR about the honour of realising a long-gestating vision for Federation Square’s Alfred Deakin building, as driven by the passionate team at cinematic institution ACMI.

There are few joys as simple yet supremely rewarding for an architect than to stand in a newly completed space they designed and see it used in exactly the way they intended.

That validation washed over BKK principal Tim Black as he joined Katrina Sedgwick, director and CEO of the Australian Centre for the Moving Image (ACMI) for television interviews about the Melbourne cultural institution’s $40 million renewal.

Standing in the transformed Flinders Street atrium, dominated by the grand sweep of the new hero staircase in spotted gum and blackbutt, something caught his eye.

“At a moment of pause, the film crew were occupying the living stair and urban lounge in precisely the way in which we would hope,” Black says.

“It really delighted me that people were naturally drawn to those spots. To know they are going to be comfortable and happy and hopefully relish being in that wonderful space.”

ACMI’s reimagined heart gives you a true sense of the scale of the place, stretched as it is across four towering storeys and reopened after an almost two-year renovation process unexpectedly extended by the global pandemic.

They saw the public gathering spot as another of Melbourne’s famous laneways, connecting Flinders Street to the river.

“That was somewhat thwarted by the Alfred Deakin Building,” Black notes of ACMI’s home, originally conceived as a retail centre.

“There was no direct connection available, so the insertion of what we’ve called the living stair reinforces that notion of the public laneway.”

A rejig of internal spaces better joins the dots of what ACMI does.

“ACMI has quite distinct offerings, from the cinemas up on level two to the café, a student space and three galleries, but each of those were quite separated and difficult to access from the other.”

Black says their role, guided by a rock-solid brief from the ACMI team, was to encourage connection.

“Federation Square is one of Melbourne most loved and oft visited centres for interstate and international tourists, so often they would stumble into ACMI and discover what a great offering it was,” Black says.

“But what they didn’t quite have is place to pause or dwell. It’s a little bit of civic placemaking.”

BKK worked hand in hand with exhibition and experience design firm Second Story, the latter delivering the refreshed permanent exhibition The Story of the Moving Image.

This core offering now exits at the gift shop, which was previously dislocated upstairs, but is now highly visible on a prominent Flinders Street corner opposite the Forum.

It has swapped places with the digital preservation lab, which was formerly buried in a basement across Federation Square.

A bright events space has ditched blacked-out windows in favour of revelling in the Heritage-listed façade, as has the education lab, a vision of coloured mirrors and white walls that seems impossibly sophisticated for school students.

Reorientated cinema stairs now lead up directly from the Federation Square entrance, with the ticket booth swung to one side to remove a perceived psychological barrier, given the majority of ACMI’s offering is free.

“Traditionally, one architect might be appointed in a principal consultant role. In this case, we were very much appointed alongside each other, and top of ACMI’s mind, testing the waters during much of the interview process, was whether we would be a good fit.”

They were, spectacularly so, Black says.

“There was, on both sides of the table, an openness and willingness to learn. In some sense, architects are the original experience designers, but we don’t always come at the design challenge from the perspective of the digital experience that is so much a part of our lives now. We were still very much grounded in a physical and spatial sensibility. So there was also just a real joy in working with designers that work within a different intellectual framework, but with a shared passion for ideas.”

Reopening the Flinders Street doors was one of Sedgwick’s first moves in the job, so she’s thrilled by BKK delivering that long dreamed for laneway.

The renewal project sprung out of a realisation that the permanent gallery had been “struggling to be as contemporary as it needed to be for something that’s so constantly evolving as the moving image,” she says.

Knowing she had to secure funds for its transformation as a first priority, pretty soon that expanded into transforming the whole of ACMI.

“Another key element that was hugely important was that we really needed to engage with the First Nations peoples, the Wurundjeri and the Boon Wurrung people who are the traditional owners of the land,” Sedgwick says.

The Story of the Moving Image welcomes visitors in with a pertinent reminder that there are thousands of years of continuous storytelling on this land.

It includes a dedicated  space celebrating First Nations filmmakers, and their work is threaded throughout. A new mirrored art commission by Vicki Couzens, a Gunditjmara woman of Western Victoria, wraps around the entrance and exit.

Art helps connect each space in ACMI. A video wall by Daniel von Sturmer leads people round from the Federation Square entrance to the preservation lounge, revealing glimpses of the digital restoration team at work through glass cabinets packed with Australian screen ephemera.

“That sense that you can now look in and see people at work doing these specialised tasks, I think it’s really magical and something that is very museum-y,” Sedgwick says.

Along with BBK, she also sings the praises of award-winning Melbourne studio Chris Connell Design, which has transformed the café/restaurant into the Karen Martini and Michael Gebran-led Hero. It’s also inspired by cinema, of course.

“Chris riffed off Jacques Tati movie Playtime, in terms of the colour palette, and you can really see it,” Sedgwick reveals. “I love that subtle moving image reference.”

This intertextuality at play in the building also charms Black. “That’s one of the great joys of working with cultural institutions that are used to delivering stuff that’s creative at its core.”

BKK is a Melbourne based architecture and urban design studio. In 2016, the practice was chosen to redesign the Swan Street Bridge in Richmond, Melbourne.