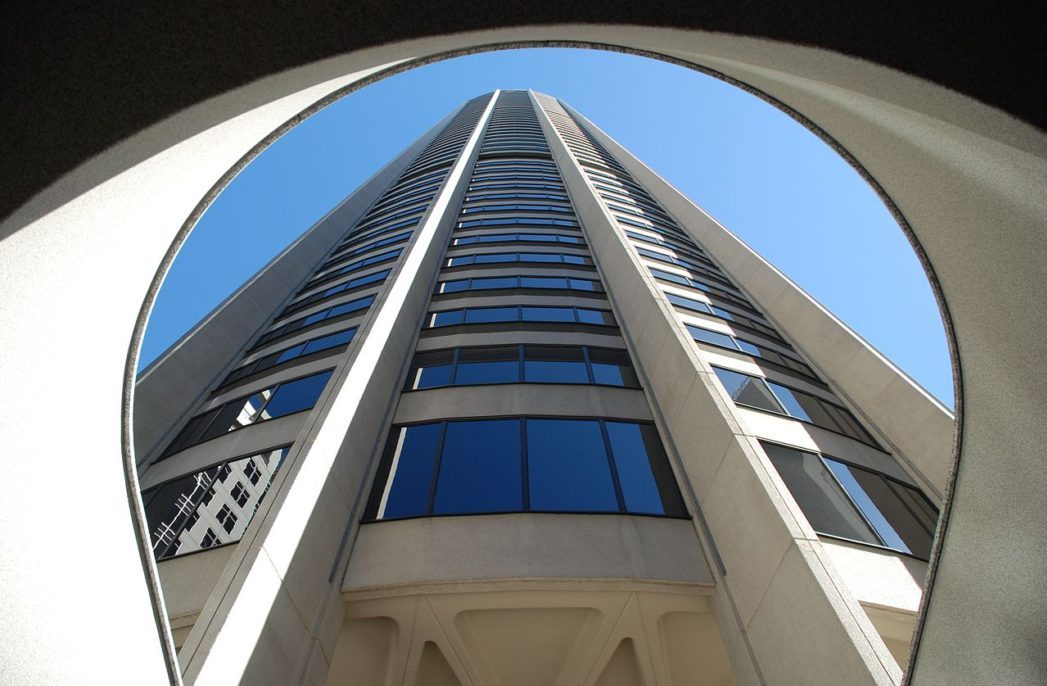 Today marks the 50th anniversary of Harry Seidler’s Australia Square, one of the country’s most iconic and groundbreaking buildings.

The building is still highly regarded as a landmark of Sydney’s skyline and an icon of modern Australian design.

During its build, the project was highly acclaimed as the start of the new modernist movement in architecture and innovative in design and technology.

Australia Square was commissioned by enigmatic developer Dick Dusseldorp, with the objective to create the most outstanding building by any measure. He engaged leading architect Harry Seidler, whose design allowed the building to become part of the natural landscape due to its circular nature. With construction starting in December 1962, the four-and-half-year build was the first skyscraper that moved away from the traditional rectangular monoliths that littered the low-rise of the city.

Construction was completed on 5 May 1967, which saw Harry Seidler realise his signature modernist style to the Sydney skyline and unveil how his three-pronged design approach worked – seamlessly merging social need, aesthetics and technical economy. At the time of completion, it was the world’s tallest lightweight concrete building and the technology used in the signature revolving restaurant remains unchanged.

Australia Square helped revolutionise the experience of office workers. Seidler was the first to successfully combine offices, public spaces, art and retail on the one site. The circular tower rises 50 storeys, while only occupying 25 percent of the land, with the rest of property designed for the public with a plaza and open outdoor spaces filled with trees, a sculpture, fountain and an abundance of sunlight.

The development is important for its pioneering approach to the challenges of urban redevelopment while successfully bridging the gap between art and industry. The use of artwork in the public spaces features a number of key pieces, including Alexander Calder’s famed Crossed Blades to one side of the main entrance and the more recently added vibrant and colourful lobby mural piece by American artist Sol LeWitt.

Penelope Seidler, wife of the late Harry Seidler says, “I remember when Harry excitedly told me in 1959 that he had been commissioned to assemble a whole city block to enable a huge urban redevelopment, this was to be a pioneer development for Sydney. Harry and I went on a quick world tour in 1960, from which he got much of his inspiration for Australia Square. Harry insisted that the great Italian engineer Pierre Luigi Nervi be consulted regarding the structure of the circular tower which gave rise to the tapered columns.

“We then went on another tour to select the world’s best art in 1965, which is when we commissioned Alexander Calder to create Crossed Blades on George Street. This was a grand time for modern architecture, creating public space on private land which is still enjoyed by Sydney every day.”

Today Australia Square continues to stand the test of time, moving with the ever-growing Sydney landscape. The building stands as a tribute to Seidler and an icon of modern Australian architecture.

To celebrate Australia Square’s 50th anniversary, there will be an exhibition in the building’s lobby that will be open to the public from 24 April to 12 May 2017. This activation will feature a collection of 13 Max Dupain photographic images, captured in the building’s early stages of construction through to its final completion. Sydney Living Museum’s replica of Australia Square from the Towers of Tomorrow with Lego Bricks exhibition, created in 2015 by Australia’s only certified Lego professional, Ryan McNaught, will also feature in the lobby during the Max Dupain exhibition.

Like Seidler’s work? Check out the Sydney home he and his wife designed for themselves. Or find out about how the formidable team of Dick Dusseldorp and Harry Seidler got started.