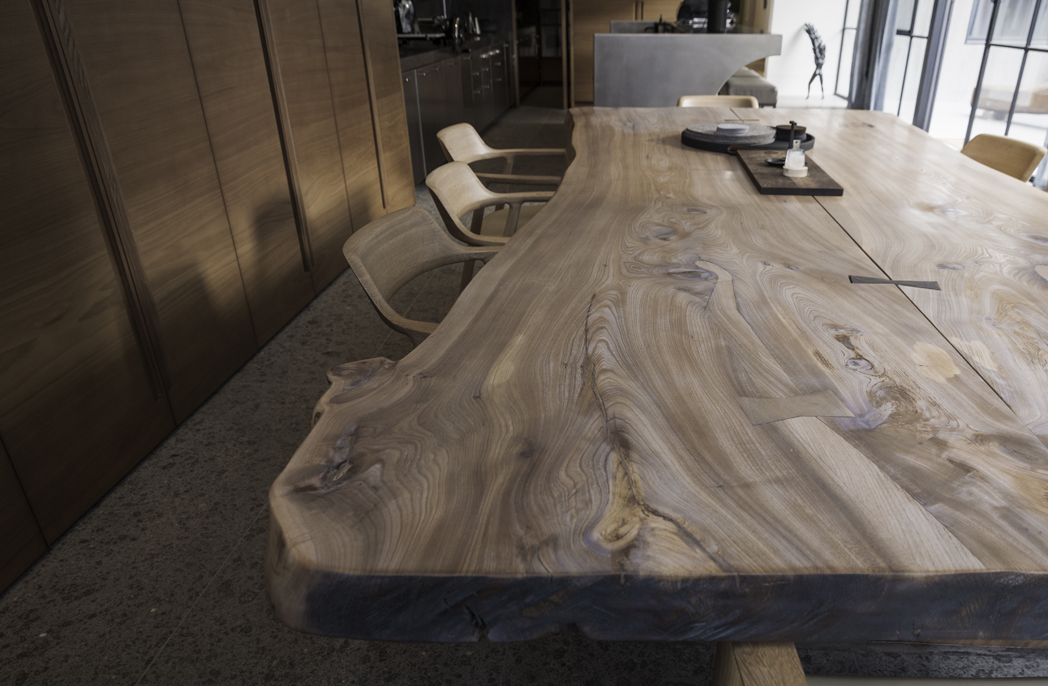 The considered art of custom furniture

Despite creating a wonderful folio of custom furniture pieces, the bespoke road is one B.E Architecture design director Broderick Ely walks with caution.

The imposing dining table that sits in the kitchen of the St Vincent Place residence looks decades old. Crafted from two huge slabs of an elm tree that have been cut down the centre and joined, the table boasts a surface that undulates beautifully around the knots in the wood, while the ends have been rustically cut with a chainsaw. It evokes such a sense of history that you wouldn’t be surprised if the owners of this Japanesque table had brought it back from a trip to Asia many moons ago.

But the first sign that its history is somewhat fresher is the way it fits perfectly into the dining space where it resides. The timber veneer on the wall behind complements the table perfectly. The chairs slide under at just the right height. It looks as though it was designed to fit perfectly in the corner of the kitchen, which in fact, it was. 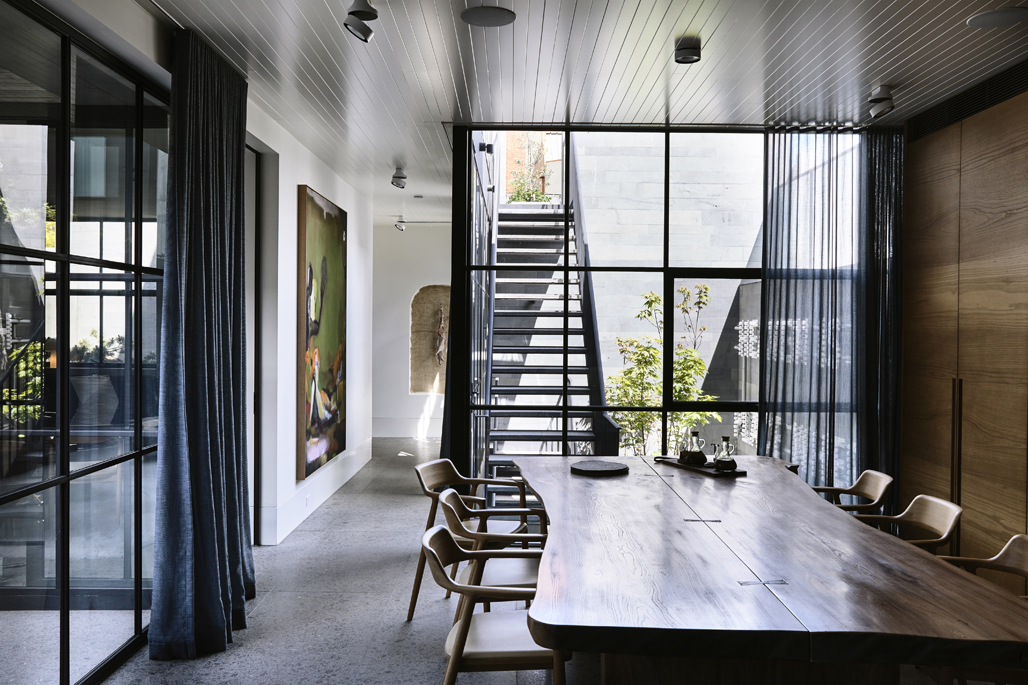 The slab dining table was created expressly for this Melbourne house by the team at B.E Architecture, who despite being well-known for their custom pieces view the bespoke route “as a last measure, not the first”.

“We design things for people, but we design things when there is a hole to fill,” explains design director Broderick Ely. “It’s not an easy or a straightforward thing; it’s actually something to be incredibly wary of.

“Everything costs a lot of money for a one-off design and the inherent risk is that the client may not like it, and that’s a huge risk. You’ve either got to be incredibly confident in what you do, or really naïve and stupid and just hope that it comes out.”

The guiding philosophy at B.E Architecture is to only create something in response to a problem: perhaps the client can’t find a chair or a light fixture that fits in a specific place, or the materials are wrong, for example. And, as a rule, most of the custom pieces the practice has created are designed to be repeated and potentially repurposed for other projects.

In the case of the slab dining table, however, Ely knew that the unique kitchen and dining space called for a one-off piece. “It’s a classic example of what we rarely do,” he says. “It took eight months to make and we started making that when the house was still on the drawing board. It’s this great talking piece, it’s a one-off and you couldn’t do it again because you’d stuff up the next one.

“Also it shouldn’t be done again. It’s a one-off piece for that house, for that couple, for that space and it’s such a pointed thing, I defy [anyone] to find another space where that would work.”

Ely is also passionate about B.E Architecture’s ability to put its own persona and tastes aside, to create something that exists “without the B.E thumbprints”.

“The products we create can go into different houses of different ilks and they’re still relevant and they generate their own importance, but they’re not about us. That’s what we try to do in our one-off pieces. That’s the guiding force behind it.” 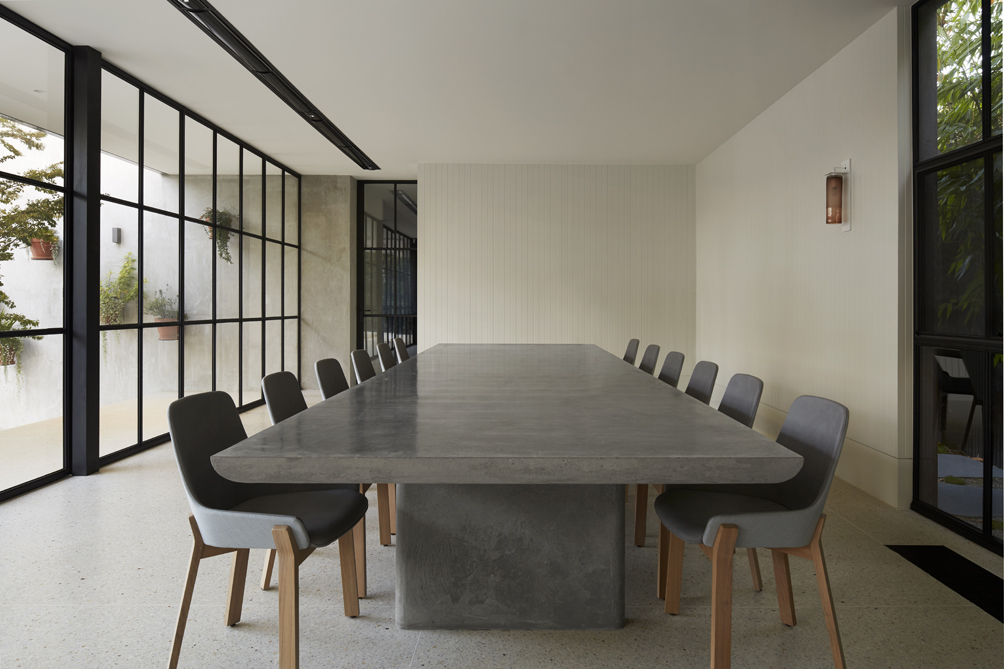 The idea for the concrete table was borne out of a practical concern of the client. The table was to be used for entertaining in their outdoor dining area and, with young children around, the client wanted a design that would withstand the rigours of family life, and be able to accommodate a large group of people.

B.E Architecture chose concrete as the material due to its robustness, and designed a curved edge detail to mitigate the potential heaviness of the form, so that it didn’t look like ‘a monolithic slab’ (the table is five metres long). Styrofoam moulds were created and the concrete was poured and finished in situ due to the scale of the piece. 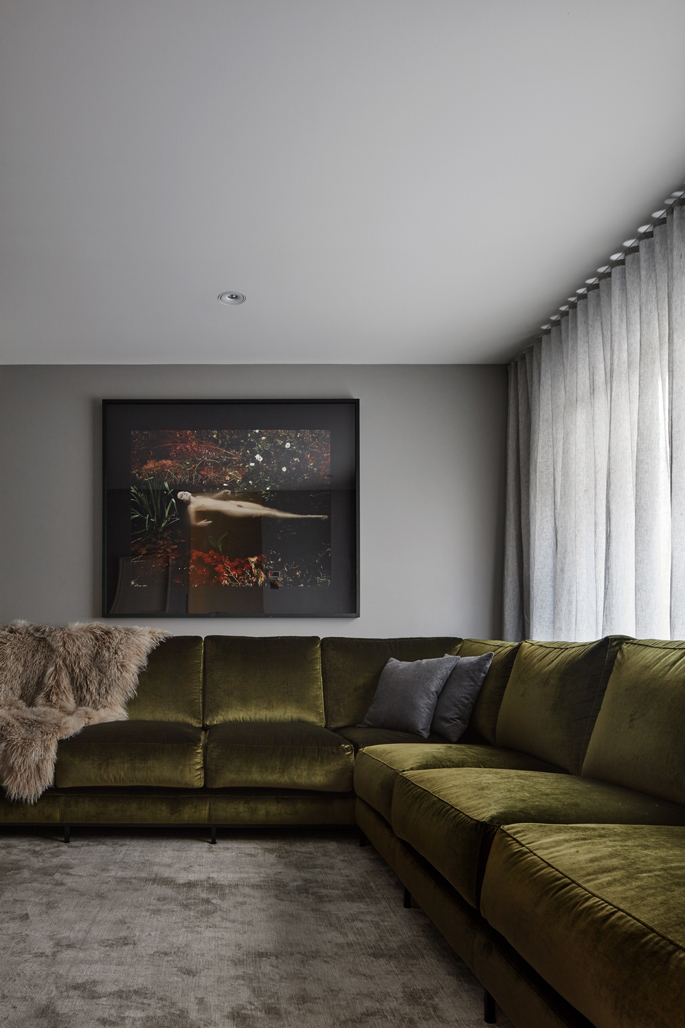 Many of B.E Architecture’s projects incorporate secondary spaces away from the main living area, which are designed specifically for watching television. These intimate spaces are based on the notion of a ‘conversation pit’ with the idea of seating groups of people in the room.

To facilitate this, the practice has developed a custom built-in sofa system. The design process first looked at the proportions and angle that support a reclined posture during a movie binge, then moved on to perfecting the level of comfort in the foam density. The sofas are tweaked to the individual needs of the client, and despite their stature – being four metres by three metres – the way they form into the wall belies their size. 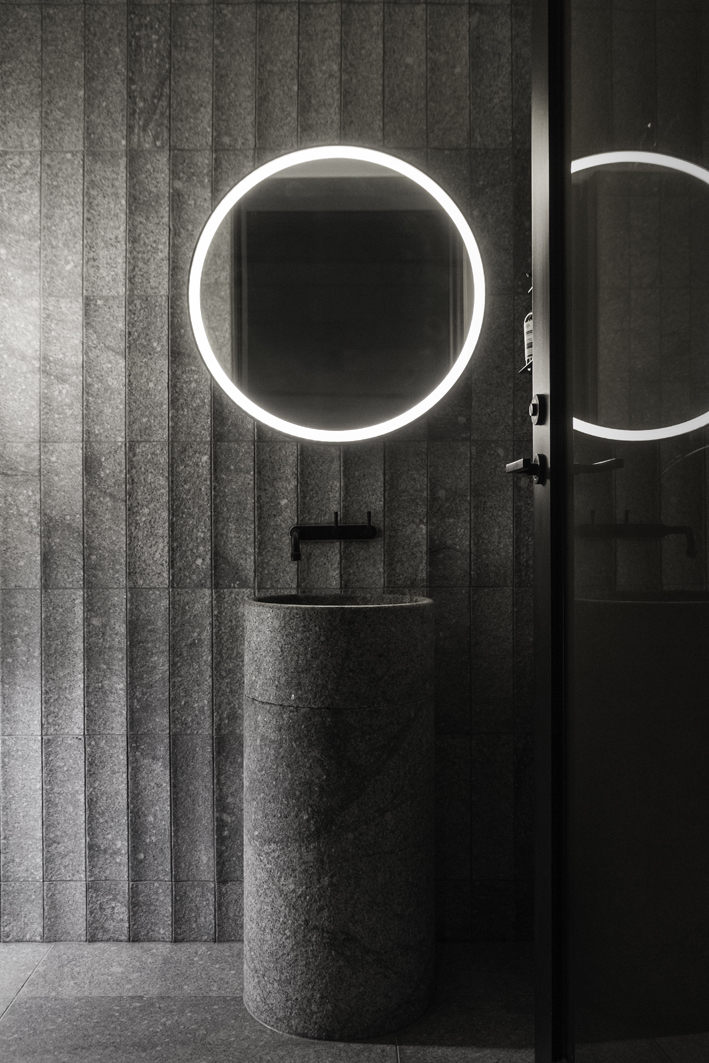 The custom mirror with integrated light is a prime example of B.E Architecture’s approach to bespoke furniture. The light was developed out of practicality to improve the daily routine in the bathroom – how do you light your face and how do you see yourself properly in the mirror?

The result of a three-year research and development (R&D) process, the integrated light illuminates around the mirror to light the face for make-up application and shaving, while the mirror glass transitions to clear at the edge to create a seamless surface. The thin metal frame encases a light behind the clear edge, turning the mirror into a light when switched on. Production is a complex process involving different fabricators that work with metal, glass and lights. 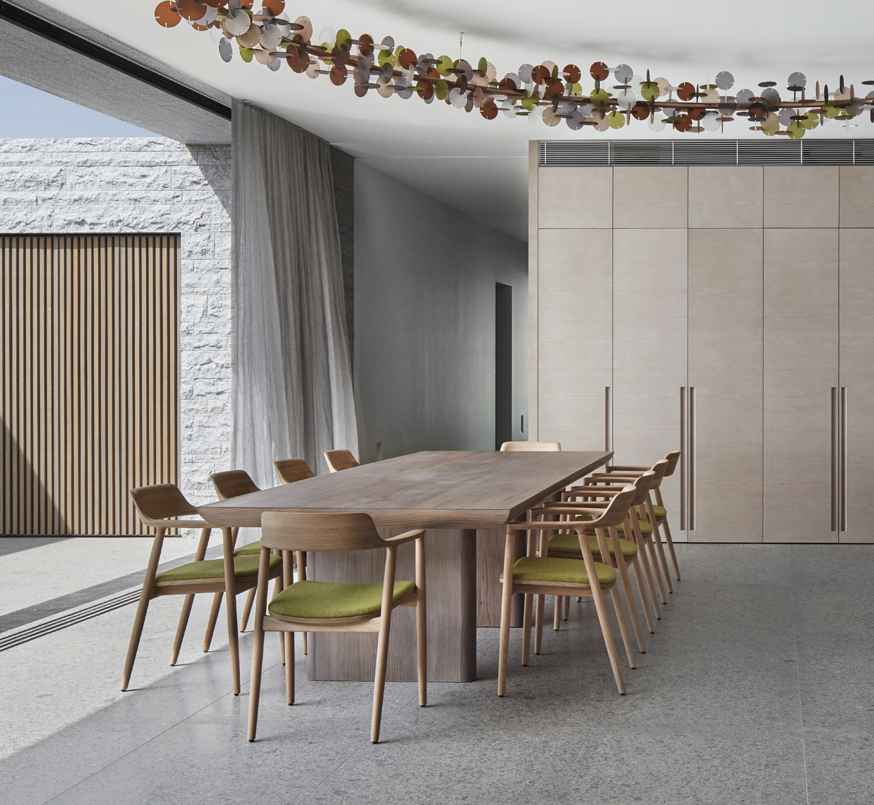 The custom Perspex Ring light at the B.E Architecture-designed Armadale residence was created to meet the brief of a “very fun” client who wanted something different. The four-metre piece is loosely based on a kinetic sculpture made from colourful Perspex circles, which has a 1960s feel.

This feature originally appeared in Mezzanine Vol 12, which is out now.