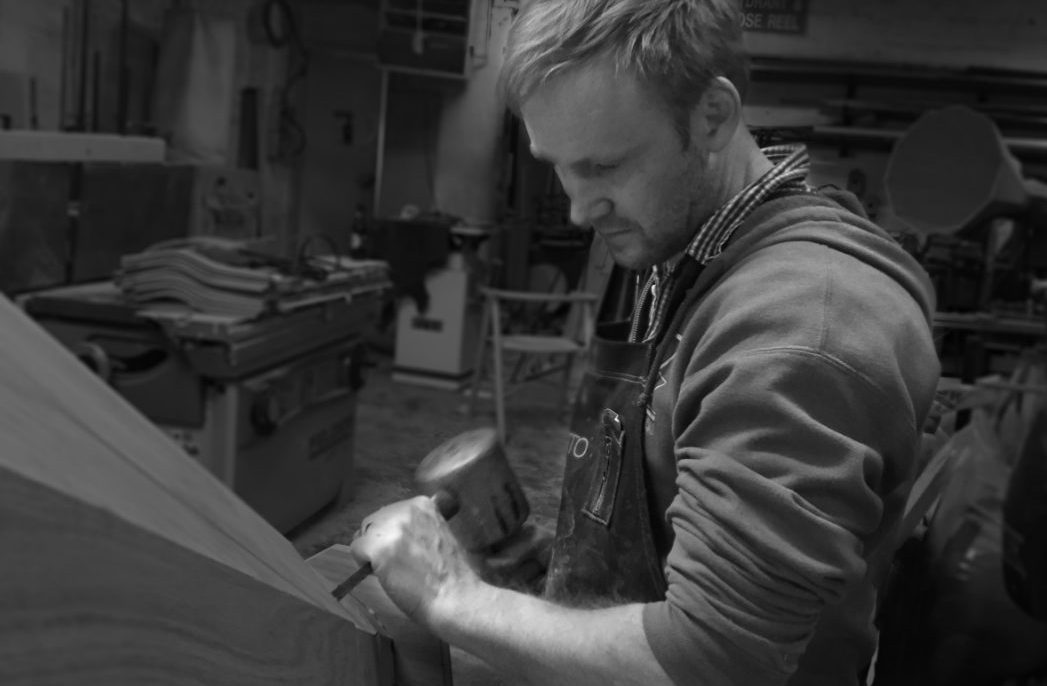 This week we talk to maker Alex Earl, who discusses the intricacies of designing sound and lighting objects, his yearning to push the boundaries of materials and which space brings him tranquillity.

Can you tell us about your background and how you ended up working in sculpture?
I’ve always made things, ever since I can remember. I grew up on a bush property and my mum was a ceramicist and dad was a metallurgist/engineer so I had access to some pretty crazy tools in a huge workshop/studio. I made all sorts of stuff when I was a kid… I made small ceramic things which I sold in shops from the age of seven, used mum’s kiln burner to forge knives from old coach bolts (I still have the scars on my hands from flakes of red-hot steel) – basically anything and everything. It’s a compulsion I haven’t been able to shake (I really still feel like I’m doing exactly the same things I was doing when I was seven) and after an aborted attempt at an arts degree at Monash, I threw away a scholarship and enrolled to study creative arts at the VCA. Although the course was multi-disciplinary and I majored in both sculpture and creative writing, I found myself constantly drawn to the sculpture workshop and the tools and materials I could work with there.

What drew you to specifically work on lighting and sound?
I like to create objects that don’t reveal themselves until the moment electricity or external forces are brought to them, whether they be lights, amplifiers or musical instruments.

Recently I’ve found that creating sound through sculptural objects is extremely satisfying. The discipline of making sound systems, in particular, is amazing because the appearance of the object can add so much to the experience and to the manifestation and quality of sound – and if something fails or doesn’t measure up to a standard it’s immediately obvious. The process of creating a complete sound system, for example, is extremely long and the final product depends on such a fine balance of components, materials and applications. So it’s a constant process of building, inventing, testing and discarding, with each step along the way revealing something new and driving the project toward an often unattainable goal.

Lighting appeals as a sculptural medium, one that is informed by and must in some ways conform to the physics of light and the properties of materials used. Making sculptural lighting provides the opportunity to create objects that engage and transform spaces, and to resolve technical problems along the way.

What has been the steepest learning curve and most pleasant surprise for you since you started your career?
When I first started out I hit the ground running from the start – I didn’t build up slowly over a number of years – I bought machinery, rented a space and instantly had outgoings, staff costs and had to immediately turn a passion into a business. It was really hard for the first eight years. Every cent went back into the business and 70-90 hour weeks weren’t enough. The only thing that kept me going was passion, stubbornness and the support of good people around me.

The most pleasant surprise was probably recently when I had a chance to pause late one night in the workshop and survey everything we were working on at that moment. I felt proud of what we were making and every level nothing was compromised. All of the efforts are finally starting to be rewarded.

What would you say has been the biggest achievement (or project that you have been proudest of) in your career?
I’m proud that we now have a workspace where everyone feels a part of something worthwhile and something enjoyable, making things they can be proud of and to have their contributions valued. It makes me happy that this crazy idea that I had can support other people financially and also enables us to pursue some pretty far-fetched ideas.

Every creative puts a part of themselves into their work. Which piece resonates with you the most and why?
I think our Sound System One resonates the most. It really has been a massive undertaking and has taken over four years of building and testing. Creating a system like ours that relies heavily on a whole lot of different components working together harmoniously. It has been, at times, incredibly frustrating but the evolution both in terms of the final result and the knowledge base that we’ve acquired has been amazing. Creating objects that have both an aesthetically pleasing and functional aspect is a real passion. It’s one thing to build a chair which has just one simple function, and another to make lights which can have such a great influence on the mood of an entire room or a sound system that brings recorded music to life.

Who/what/where do you look to for inspiration?
Growing up on a bush property surrounded by nature, a lot of my work draws inspiration from the natural environment and natural forms. I’ve always been drawn to materials – exploring what different materials can and can’t do, and interrogating established ideas about how things ought to be made. Often someone saying that something can’t be done, or that an idea is crazy, is a big catalyst for me – I’ve never been content to take someone’s word for something or to follow rules or orthodoxy. It’s probably really annoying, but whether something works or not I’d rather follow something through if I believe it can be done, or if someone else’s answer doesn’t satisfy me.

What’s something many people don’t realise about your work/industry?
I think maybe a lot of people don’t realise how difficult it is to keep the momentum going. There’s never any time to rest on anything you’ve achieved – you need to be constantly planning and constantly moving. Every part of the business, from initial ideas through to book-keeping needs to be given equal weight. Challenges in all areas are constant and you neglect one part of the system at your peril. Also, trying to prevent the creative part of your brain from suffocating under the weight of the stress of business management tasks is a real challenge that I didn’t realise would be quite so arduous.

What’s your favourite space/place in Australia?
I love spending time alone in the bush, and whenever we go anywhere in the country I’ll always walk off into the hills by myself for a while. I spent a lot of time as a kid alone in the bush, with nothing but the sights, sounds and smells of the landscape, and it really grounds me and purges a lot of the pointless noise and energy of the city.

What are you working on currently?
Lately, we’ve been working on combining timber, with all of its unpredictability, with man-made materials – combining them in interesting and technically challenging ways.

We’re working on a project with Black Line One Architecture and the Dementia Foundation – creating sound installations to raise awareness about the growing social issues presented by dementia. This year is really about exploring possibilities in all areas, and having fun while doing it.