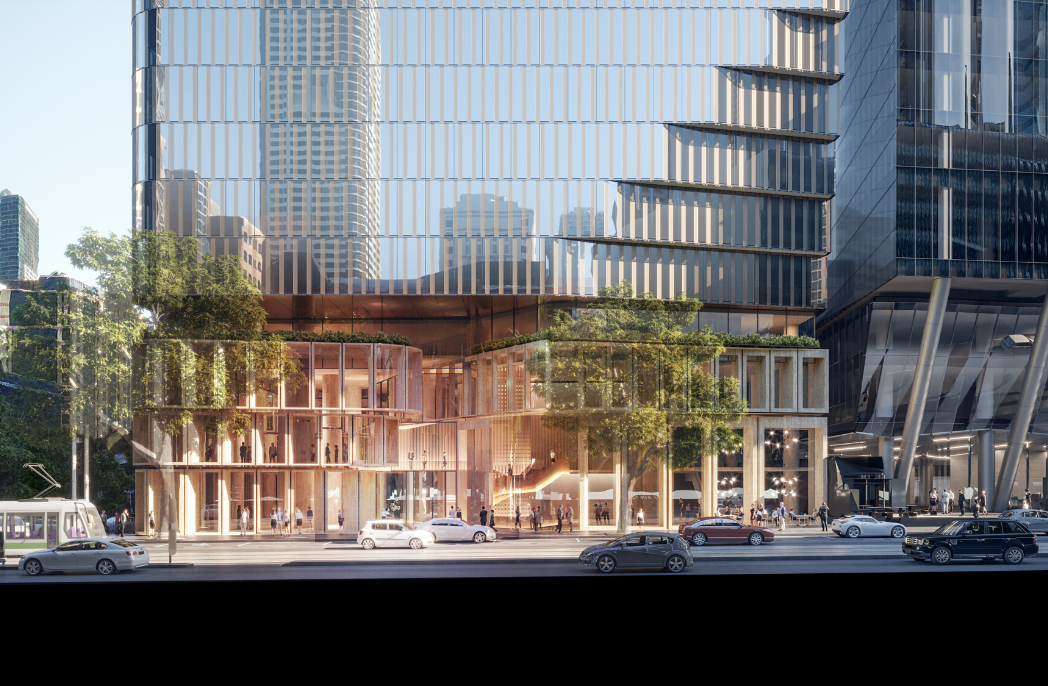 Charter Hall’s new $1.5 billion Melbourne commercial development at 555 Collins Street is being designed with a humanistic focus thanks to a unique joint venture.

With 45,000 square meterage over 35 floors, an emboldened Melbourne CBD location and occupancy rates at delightfully low levels, you’d assume a $1.5 billion commercial tower from Charter Hall would be a successful walk in the park.

But the developer is going to great lengths with the design of 555 – as it’s affectionately referred to – in order to future-proof it for the impending workforce.

Instead of designing a space and then asking tenants to mould into it, Charter Hall is embracing ‘humanistic design’, a people-first approach to ensure every aspect is a positive, empowering and productive experience. The desired result is a development that is high-tech, but also inclusive, community-minded and flexible.

A joint venture between Melbourne-based Cox Architecture and global design firm Gensler is spearheading this process. Cox has worked with Charter Hall on a number of projects, and Gensler has made a name for itself through extensive research on the ways people interact with retail, hospitality and workspaces, injecting psychology insights into an architectural process.

Simon Stockfeld, regional development director of Charter Hall, says the company had invested in the site for some time, but once they secured the corner site (100 metres of frontage on King Street and almost 50 metres on Collins Street) discussions began with Cox about the design. They concluded an international perspective was needed and Gensler, one of three contenders, was a clear stand-out. A long-term collaboration has ensued between Cox and Gensler, led by Lara Marrero, principal and studio director based in Gensler’s London office and Cox director Simon Haussegger.

“We really saw a meeting of minds between Cox being Melbourne-based and having some really good design credentials and understanding office workplace really well and Gensler being probably the leading practice in workplace in the world,” says Stockfeld. “The collaboration between those two has been great.”

The joint venture is a 50/50 approach, with teams working around the clock in their respective time zones. Stockfeld says this is the first time a project has been designed in this manner, putting workplace psychology at the forefront to find solutions that cross generations, industries and tenant types. It’s been quite the journey, spending two months in discussions about how to make 555 unique before drawing even began.

“In the previous generation we would have been doing some of that stuff already,” adds Stockfeld. “For Charter Hall it was quite confronting. We didn’t quite see the linkage between some of the thinking we were doing and how [the architects] responded to the design.

“They did a really good job of taking us on their journey through that and ultimately coming out with a really solid design brief.”

Haussegger says the joint venture has been a “rich” experience.

“There is a new world that has been opened here where [Charter Hall is] thinking about the tenants first and that translates directly into this idea of humanistic design,” he says. “You are really thinking about people first rather than prescribing a built form for a tenant and a user.”

At its core, a humanistic approach to design focuses on the human experience, according to Lara Marrero.

To do this, Gensler developed its Experience Framework tool, which allows design principles to be viewed through the lens of human experience – specifically a person’s intention, behaviour and expectation within a space.

The company’s research focuses on shifts in workplace culture and the increasing collision of lifestyle and work style. Marrero says the emergence of the ‘third workspace’, where workplaces mingle with coffee shop vibes to spawn co-working facilities, signalled a shift in how workplaces need to be designed, so employers can achieve their most important goal – to attract and retain talent. The challenge is to move beyond the gimmicky beanbags and ping pong tables.

“It’s this idea that our work styles and our lifestyles are coming together,” she says. “If you provide more amenities and people feel as though they have choice and flexibility they will come in earlier and leave later, but they see that as benefits. It’s one of the things that helps to make decisions about where they want to work.

“People like to be in spaces that reflect their ideologies; people like to be in places that are convenient, they like to feel as though they have an environment around them where there is plenty of places to go for lunch or drop off their kids nearby, go to the gym, go out after work.”

One of the practical ideas emerging from the process is shaping 555’s retail area to operate like a common area with seating that can be transformed into an events arena for TED talks, workshops, Town Hall meetings and pop-up markets.

“One of the things that Gensler’s research has taught us is that single-use spaces are becoming obsolete, so how do we find ways for all these areas to blend together? Because it’s not just about what the space is, but how the space gets activated,” Marrero says.

It’s a mistake to think people are always motivated by money when they are choosing an employer, says Marrero, as time and a sense of belonging also play a huge role.

“When it is a workplace thing it is ‘I want to get this much money but…’ there are the intangible things that go with that, which are: ‘am I going to feel as though I am part of the community?’, ‘do I feel like this environment is going to provide me with a platform for further development?’ and ‘do I feel like I will have a balance of lifestyle and work style in this place?’,” she says.

Future-proofing a commercial building requires a solid examination of what workplaces look like now, what they could look like in the near term, and what is coming next, says Marrero.

Gensler staff spent a week in Melbourne, and Marrero and her team hosted architects from Cox in London, conducting a study tour of various buildings to compare styles, technology and design. The exercise served to create a baseline and revealed Melbourne is playing catch-up in some areas, but is quite dominant in others.

Technology is high on the to-do list. It’s a given, according to Stockfeld, that 555 will be equipped to deal with current technology thanks to an analogue ‘backbone’, but also in the future. This could include facial recognition for the entryway, sign-in technology for visitors, virtual reality and more.

But what’s also imperative is ensuring the building is flexible enough to adapt to changing workforce practices. This includes how people use it from an 8am to 5pm routine, but also how it can be utilised in the event shift work becomes the norm.

“For 555 what we are talking about is having a significant amount of space in the building being operated by a flex provider,” Stockfeld says. “It’s not co-working per se; it’s a provider that curates a space, but provides space for large tenants to take things like flex space, quasi-co-working spaces, so people’s workday can be quite different.”

Haussegger says a key aspect of looking forward is creating a space where multiple generations of workers can be equally at home.

“We talk about Melbourne being one of the most diverse cities on the map and to target one particular group of people or generation you are really risking the end value of the product,” he says.

“A real focus is ensuring that spaces are comfortable for a 65- to 70-year-old person where they can have a phone call just as much as the 22-year-old who can have a conversation on WhatsApp.”

Stockfeld says Charter Hall’s most effective buildings have been borne of consultation and engagement with pre-commitment tenants, but the collaboration with Gensler and Cox takes this one step further.

Interestingly, one of the main commonalities between what tenants are asking for, and what Gensler is unearthing through its research, is the increased need for spaces that connect people face to face. This may appear to fly against the grain in a world where technology is evolving so rapidly and digital communication is peaking.

“A lot of our multiple floor tenants are creating large voids and internal stairs through their workspace to help create community and combine their workforce and bring people together,” Stockfeld says. “Our hope is that our tenants in this building have a connection to the building beyond just their workplace. So things like morning Pilates, mindfulness, yoga, health-based activities, thought leadership events and providing both the resources and the spatial allocation to that use is really important. And that can become part of people’s workday.”

Marrero says social media and technology are to blame for rising isolationism, depression and anxiety, which is why a human connection is so imperative.

“Part of our DNA as humans is to want to be part of a tribe,” she says. “Because people have a screen in their hand at all times, they want to go to places to connect – not online – to others. And that is what we are trying to do, bring an element of human into spaces.”

Demolition on the 555 development began in 2019 with Charter Hall hoping to have the first stage completed mid-2022.

Charter Hall is still in negotiations with several tenants, but anticipates a broad range from industries including financial services, banking and legal.

Haussegger says the building will eschew a ‘typical’ Collins Street look – no shiny marble foyers or cold entryways. Instead it will offer a hospitable entry and its façade will offer a nod to a Heritage building that existed on the site until it was demolished in the 1970s – all in the pursuit of offering a ‘Melbourne’ vibe to the design.

“The imagery of the tower is slightly more the softer form, so the intent is that it is not aggressive or masculine; it is meant to be welcoming, inclusive and feminine,” he says. “It’s not meant to be a hero piece of architecture; the whole idea of accessibility and inclusiveness is really important.

This article first appeared in AR162

At home with Dan Cox and Jamie McGibbon