Home • Interiors • “We don’t want to be just business owners having lunches. We want to design” – Richards Stanisich 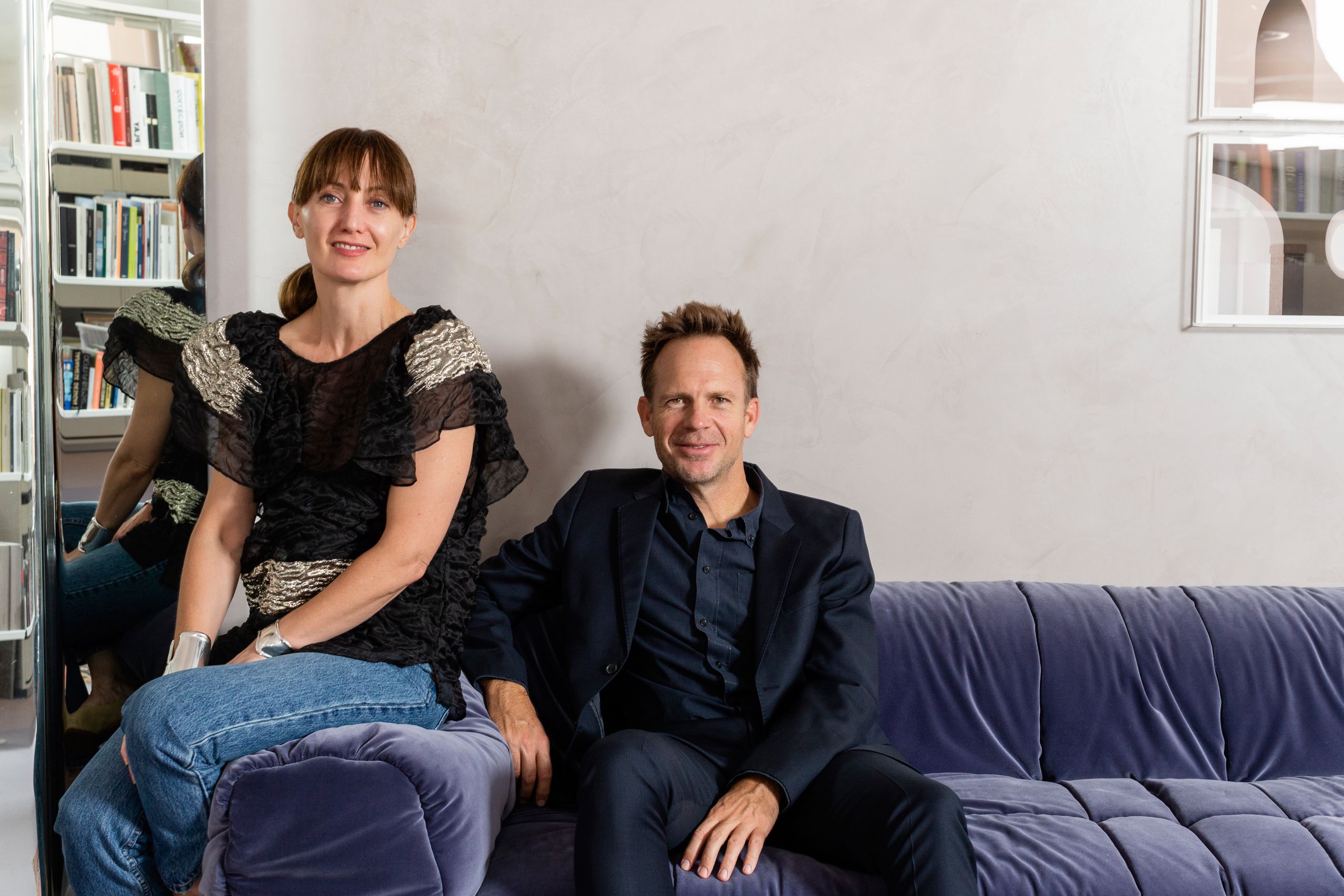 “We don’t want to be just business owners having lunches. We want to design” – Richards Stanisich

The designers behind the IDEA 2020 overall project winner and Residential Single award winner open up about their design process, their creative vulnerabilities and their future as one of Australia’s best loved studios.

Kirsten Stanisich and Jonathan Richards made names for themselves as the directors of SJB’s Sydney interior design department.

In 2018, they left the practice to strike out on their own, and in 2020, they cemented their almost-20-year partnership with Private Residence – a tour de force renovation and addition to a single-storey house designed by Harry Seidler.

Built in 1958 as a tribute to Sydney’s modernism, Private Residence took out IDEA 2020’s top prize for the way in which its designers respectfully, but playfully, restored its original design, while adding their own stamp.

By considering the original architect, the sustainable benefits of a modest size house and contemporary design equally, Private Residence is distinguished by its design intelligence.

ADR caught up recently with the Sydney designers to find out more about the project and about what drives Richards Stanisich after almost than two decades in the industry.

ADR: Private Residence was such a unique project. How did it come about for you guys?

Jon Richards: We had a colleague, a friend of ours, who was assisting the client with this really lovely, all original, styled building that needed a renovation. And he knew that Kirsten and I love old buildings, so he connected us. I think the client knew we would approach the project, not as just a sort of cosmetic fix up of the inside, but deal with the project as an entire house.

The IDEA jury loved how you convinced the client not to rebuild the home as a two-storey building, but rather work with what they had? How did you do that?

Kirsten Stanisich: That was really difficult.

Jon: It’s an area that has a lot of two-storey houses and, as you would know, people try to maximise their opportunities with any site. And we did look at it, but we were really uncomfortable because the beauty of the house was that it was so modest. If you tried to double its size and increase its height, you’d really be taking the spirit away from the house.

A lot of people mistake Private Residence as being a Heritage-listed house. It’s not, is it?

Richards: No. It has no classification of the sort, so theoretically, it could have been demolished. But the client was never interested in that. I think we should love old houses in general, and we tried very hard to preserve what magic about Private Residence through our design.

The interiors are very bold, very courageous, very focused on that mid-century era. How did you settle on that look?

Richards: I was really nervous about it being a cliché, and about us looking as though we were pretending it was the original interior. We were wanting to take inspiration from it, but even using materials like crazy paving – it’s such a distinctive 1950s, ’60s material, that we really had to work out how we could use it without pretending or trying to pretend to people that it was the original floor. It had to look a little more considered and adult. That’s why we wrapped it up a wall and the fireplace.

Stanisich: As designers, we like to pack the essence of who the client is into the design. Look at each project we do. There’s definitely a continuity between the ideas, but there’s also the personality of the client, which is the thing that helps us differentiate projects. That can be really hard, but it’s also really exciting.

Were you surprised Private Residence took out the IDEA 2020 Overall Winner?

Richards: Yes, I was. I was really happy. We don’t try to do our projects to win awards. The objective is to try and come up with something that the client really loves and that we find inspirational. To be honest with you, Kirsten and I have been working together for nearly 20 years. We are really proud of what we do, but we couldn’t always expect that peer recognition in the past.

But now we feel as though our design direction is also becoming aligned with our peers, which is really nice. It’s really very pleasing to get the recognition.

What was it like in particular to get that sort of recognition from people like SJB director (and IDEA 2020 judge) Andrew Parr, who you’ve worked for and who you admired for so long?

Stanisich: I think it’s pretty incredible because we feel like we’ve really matured. If you had a hundred clients say they love it, although that’s great too, it’s something else to be recognised by someone you respect so much. It’s like a winemaker having someone that’s a serious, amazing wine lover compliment them. It’s an amazing feeling.

You guys have worked together for almost 20 years. Has the way you approach projects changed?

Stanisich: I think there’s an incredible maturity that takes years to understand. When you get older, your holistic view of the world and everything changes. We believe in this idea of minimally processed materials. Each space needs to have an emotional feeling that might not be so descriptive in photographs.

Richards: As we get older, Kristen and I have more confidence. We’re growing more confident all the time about what is essential to us as designers, and essential to the project we’re working on. And I think that with every project, we start out generally with lots of ideas and by the time it finishes, we’ve distilled them right down to the essence of what the project is.

Has your working relationship changed over that time as well?

Richards: It hasn’t changed much at all. We sit next to each other in the office and we talk incessantly. Well, Kirsten talks a lot and I try to talk less, but when we have lunch or time together, we are in each other’s pockets. We’re very close friends and we like working together.

And do you have set roles or responsibilities within the practice?

Stanisich: Often when we meet clients together at the beginning, you get the feeling that a client gravitates to one or the other.

Richards: A lot of the job is relationships between you and the client. And Kirsten and I are very hands-on with our projects. So we tend to develop our own relationships with our respective clients, but we’re talking all the time about our different projects, so essentially, the answer to your question is we kind of do the same thing.

Stanisich: Yeah, we do. Sometimes I feel like, I’ll be the client’s friend and John is like my brother, who pops in sometimes. And vice versa.

How do you think social media has changed the way clients approach you and the way that you work?

Richards: Brand awareness. When we started, we used to scan magazines and literally, spiral-bound folders of images that we liked. But now it’s a totally different game. It’s also really fraught because with limited means back then, you were forced to be creative and think of things differently, whereas now, there’s the temptation to compile a project together with a series of images, rather than sitting down with a pencil and paper and actually working out a unique design.

It’s a problem. It’s a prize, it’s a gift. But when it comes to originality, it can also hamper the client interaction because they see a stair that they love and they go, “This is the stair I want.” And you try to convince them that it doesn’t have to be that stair. It could be their own stair. And they say, “No, no, this is the stair I want.” And that’s not the way a designer wants to work.

Stanisich: That’s styling, but not designing. When you’re designing a project, you think about the idea and work out your idea. And then social media becomes a tool you can use to get some descriptive images to your clients. You’re not using those descriptive images as the first ideas. They’re there just to help translate it to a client. Using it that way is invaluable.

Aside from that, what do you think is the most challenging part of being designers today?

Stanisich: There’s so much, to be honest. I find very intense-client relationships can actually really take a lot out of you because you really love your work. You get very emotionally invested. And know it or not, it’s just the insecurity that gets more difficult.

Even after 20 years, Kirsten, you’re still so attached to your designs?

Stanisich: Yeah, I do. I think John does as well.

Richards: Yeah, totally. We made a decision that we don’t want to be just business owners having lunches. We just want to design. So we both get very personally, heavily invested in every project. We got a lot of emotion when you’re preparing ideas. You frequently get your ideas get knocked back. We’ve been doing this a long time, but you still feel it.

What does the next 20 years look like for Richards Stanisich?

Richards: We’ll be dead. No. We’re doing architecture, some new houses, and some additions to old buildings. And I think that’s a really exciting thing for us because as interior designers, we have a different take on the way architecture take shape, I think, compared to a lot of other architects.

Stanisich: And I want to do an airport.

Richards: Yeah, I want to do an airport.

Entries for IDEA 2021 are now open! Enter your project before 2 May for the early bird discount.