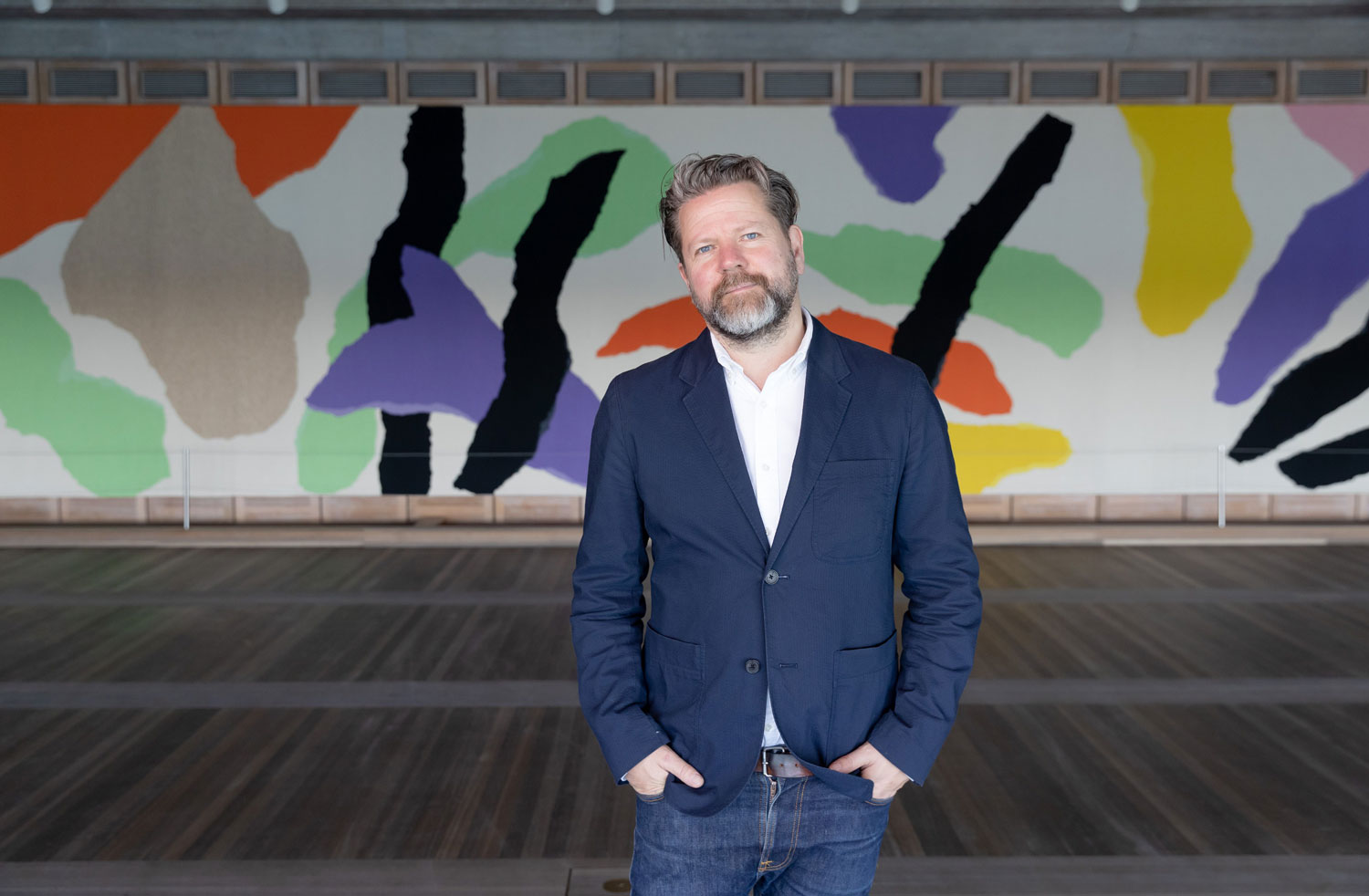 Comedian and design enthusiast Tim Ross has put the recent lockdown to good use by producing a new podcast about the Sydney Opera House’s tapestries.

“As a touring performer, everything sort of stopped. So pretty quickly, I thought about all the things I could do if I can’t get on the road,” he tells ADR.

“I had been fascinated by the tapestries for a while, so I emailed the Opera and said, ‘I reckon there’s a great podcast in this story.’ They agreed, and so here we are having this conversation.”

The first episode of House Stories: The Tapestries was released today to coincide with the anniversary of artist John Coburn’s birth.

In 1969, the abstractionist was commissioned to create two large scale tapestries as stage curtains for the Opera House.

Coburn spent three years in France creating the tapestries out of Australian Merino wool before they were sent to Hamburg to be turned into stage curtains.

Designed with vibrant colours and abstract shapes inspired by his hometown in tropical far north Queensland and by Spanish artist Joan Miró’s ceramic murals, the tapestries were used to heighten audience members’ sense of anticipation as they took their seats.

They were decommissioned in the early-’80s and moved permanently to storage following criticism from the theatres’ resident companies.

Not everyone was happy to see them go.

“People were upset because the idea of them, in particular, the Le Corbusier, was about this explosion of color that prepared you for the performance. It was incredibly appealing. Something they vividly remembered,” explains Ross.

While the first episodes of House Stories: The Tapestries touches on the scandal, it, in signature Ross style, zeroes in on the people who lived and experienced the works from commission to controversial removal.

“Coburn’s daughter, Kristin, speaks about the family’s experience of going to France when her dad was my age,” Ross says.

“In another story, she talks about helping her mum choose a dress to wear for the Opera House’s opening in 1973, and it splits as she’s curtsying to meet the Queen. It’s an incredibly evocative description of a moment in time.”

House Stories: The Tapestries explores all four of the Sydney Opera House’s tapestries.

Alongside Coburn’s the Curtain of the Sun and Curtain of the Moon are Le Corbusier’s Les Dés Sont Jetés (‘The Die Is Cast’) and Jørn Utzon’s Homage to Carl Philipp Emanuel Bach.

In exploring the latter, Ross speaks to the architect Richard Johnson, who worked on the Utzon Tapestry Room at the Sydney icon.

“Coburn’s work represents the Australian landscape. And his tapestries helped give what was this international star of a building a very Australian flavour,” explains Ross.

“But he was also a very thoughtful man, and I think there’s a great story in this guy from Queensland who found the confidence off the back of serving in WWII to chase his dream of being an artist.”

For Ross, the podcast is also a timely reminder of how COVID-19 has affected the Australian art industry.

“The industry has just been decimated with no real support from the Federal Government. The Opera House is a very alive symbol of what happens when we do value the Arts,” he explains.

“We need to be reminded that no matter what your background is or where you’re from in this country, there’s an opportunity that some kid from Northern Queensland could end up with these artworks in the greatest building of the 20th century.

“But that only happens when we support the Arts.”

House Stories: The Tapestries is available to stream on the Sydney Opera House website.

To coincide with the podcast, the Opera House has also released a new digital exhibition on Google Arts & Culture exploring the story of these artworks and their place in Australia’s design history.