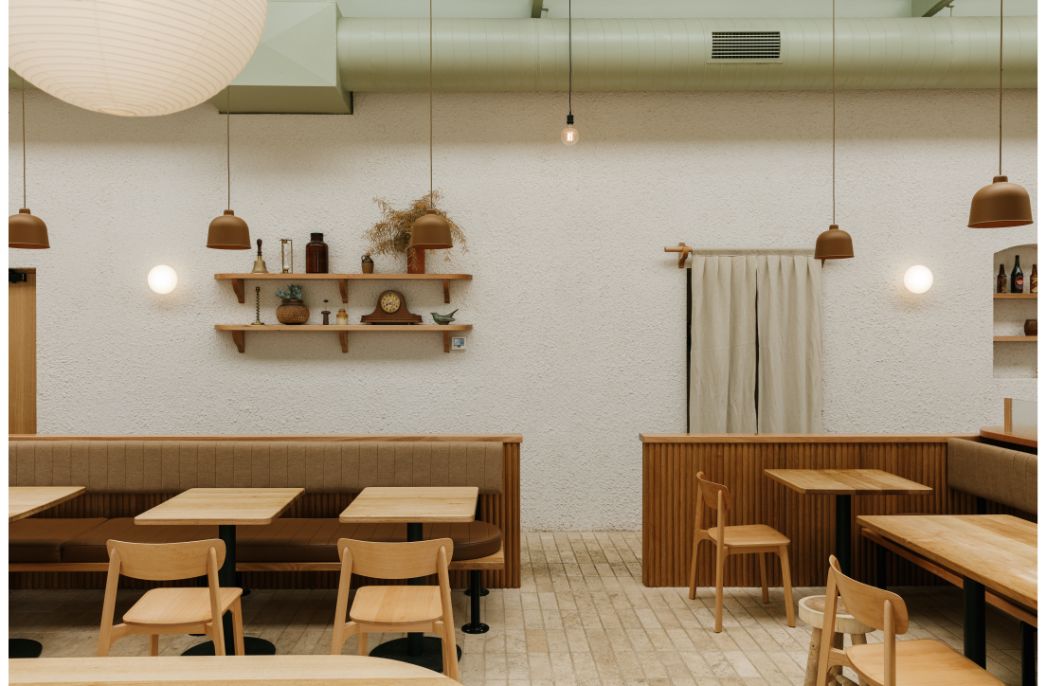 Sans-Arc transforms an old tram shed in an industrial pocket of Adelaide’s inner west into a new café that celebrates the grower-to-plate ethos.

Having grown up on farms in the country, the owners of Bloom wanted to showcase links to fresh produce, local farmers and growers.

The newly opened café sits beside Karrawirra Parri/River Torrens, opposite the former West End Brewery and occupies a former tram shed in Thebarton – an industrial, city-fringe location that is slowly gentrifying. It also just happens to be the second hospitality venue from the team behind Peter Rabbit on the University of South Australia’s City West Campus.

From the outset, Bloom was designed to draw from its own gardens. Raised beds were installed around the tram shed for that purpose and the owners established a larger garden at nearby Woodville for fruit, vegetables and herbs.

Bloom’s food philosophy is based on self-sufficiency and sustainability, and Sans-Arc’s design reflects that with a pared back aesthetic.

“We wanted it to be super-natural and tie in with the context,” says the studio’s director Matiya Marovich.

“It’s on the river with a beautiful garden out the front, so we emphasised those connections and openings with new windows and plenty of natural light.

“The original building uses bricks from up the hill, and is raw and authentic and real, and so we wanted to express the building and just dress the shell internally.”

The Adelaide architects installed new doors along the shed’s eastern elevation, while a new covered pavilion at the northern end (not part of the brief) faces the majestic red gums that line the riverbank.

The café is open all day serving breakfast and lunch, and the pavilion is used for outdoor dining and functions, under the moniker Winwood Garden.

Having put the Peter Rabbit shipping containers together themselves, the café owners gave Sans-Arc a more aspirational brief for their second venue. Marovich recalls they asked for a space that maintained the rustic, handmade aesthetic of their first venue, but this time, the interiors needed to be multifunctional, while still drawing attention to the open wood fire at the heart of the new café.

With that in mind, Sans-Arc placed the circulation spaces along the edges of the shed and divided the 265-square metre interior into three distinct zones along its length, with a mix of table and banquette seating for about 24 people in the centre.

This area is bookended by the bar at the northern end and the beehive-shaped wood-fired oven at the southern end.

The all-day dining menu features dishes designed for sharing, many of which emerge from the fire, from charcoal chicken and wood-fired barramundi to halloumi and vegetables, barbecued cauliflower and several types of bread.

The ceiling was painted a soft eucalyptus green to highlight connections with gardens and growing, and plants feature throughout the café, ranging from trees in oversized pots to elevated planters that drape tendrils from the top of the bar.

Hardwearing Italian travertine tiles that will patina with age line the floors, and timber joinery elements in Victorian ash punctuate the lofty interior, providing a warm contrast to the shed’s rendered white walls.

These are mounted on sidewalls, nested in alcoves and suspended from the ceiling trusses to display old and antique objects that hark back to the shed’s earlier life, adding depth and character to the space.

“We favoured the use of raw materials – there are no artificial finishes apart from the ceiling,” Marovich adds.

“We were going for that wabi sabi idea, the sense that the fit-out is rustic and imperfect and raw, as opposed to rustic industrial.”

References to the building’s original arched windows can also be found throughout, from the beehive shape and brick vaults of the wood-fired oven, to the partitions that separate the kitchen from front-of-house, to the curved ends of the bar and some tables.

In keeping with its focus on sustainability, Sans-Arc’s design response aimed to do more with less, and to last the test of time; even beyond the café’s 10-year lease period.

Previously used as creative offices, the shed’s most recent tenancy featured a mezzanine structure that was removed for this incarnation, although most of the existing services were retained and reused to save on costs.

The building was extended only slightly. An existing lean-to structure had some bathrooms and more were added, and the kitchen was extended slightly to the north.

Sans-Arc views each new project as an opportunity for its clients to act as the custodians of the building, and as such the practice delivers fitouts that can be easily adapted and reused – not demolished and destroyed – at the end of each lease.

“We wanted to leave the envelope of the building in good shape for future occupants and emphasise its quality and character,” explains Marovich.

“We created the identity and feeling of the space through the fit-out elements, within a beautiful shell that can be embraced by future tenants.

“In a world of venues being demolished and refit regularly, we dream of coming into spaces where our process is simplified by the existing building – where a few simple moves inside create a space perfect for the offering.”

In this, the practice takes care to specify environmentally conscious materials.

“We have strong principles and things we believe in, so in this case we opted for locally sourced, sustainable Australian hardwood and we’ve limited the use of steel. The veil and all of the fabric throughout is a hemp-bamboo weave – a really beautiful fabric that we were keen to use.”

In a part of Adelaide that has seen no shortage of new hospitality venues opening in recent years, Bloom offers an inspiring new approach, thanks to its owners’ farming backgrounds and the wood-fired oven at its heart.

For the people working nearby in offices and at the university – or those passing by on the riverside bike path – this new café is a welcome addition to the area.

For the rest of us, its tucked away location makes Bloom and its inner city garden feel like a secret discovery.

What not to miss at Interiors Australia and DENFAIR 2022