Home • Interiors • Chiaroscuro lights the way in this Melbourne home 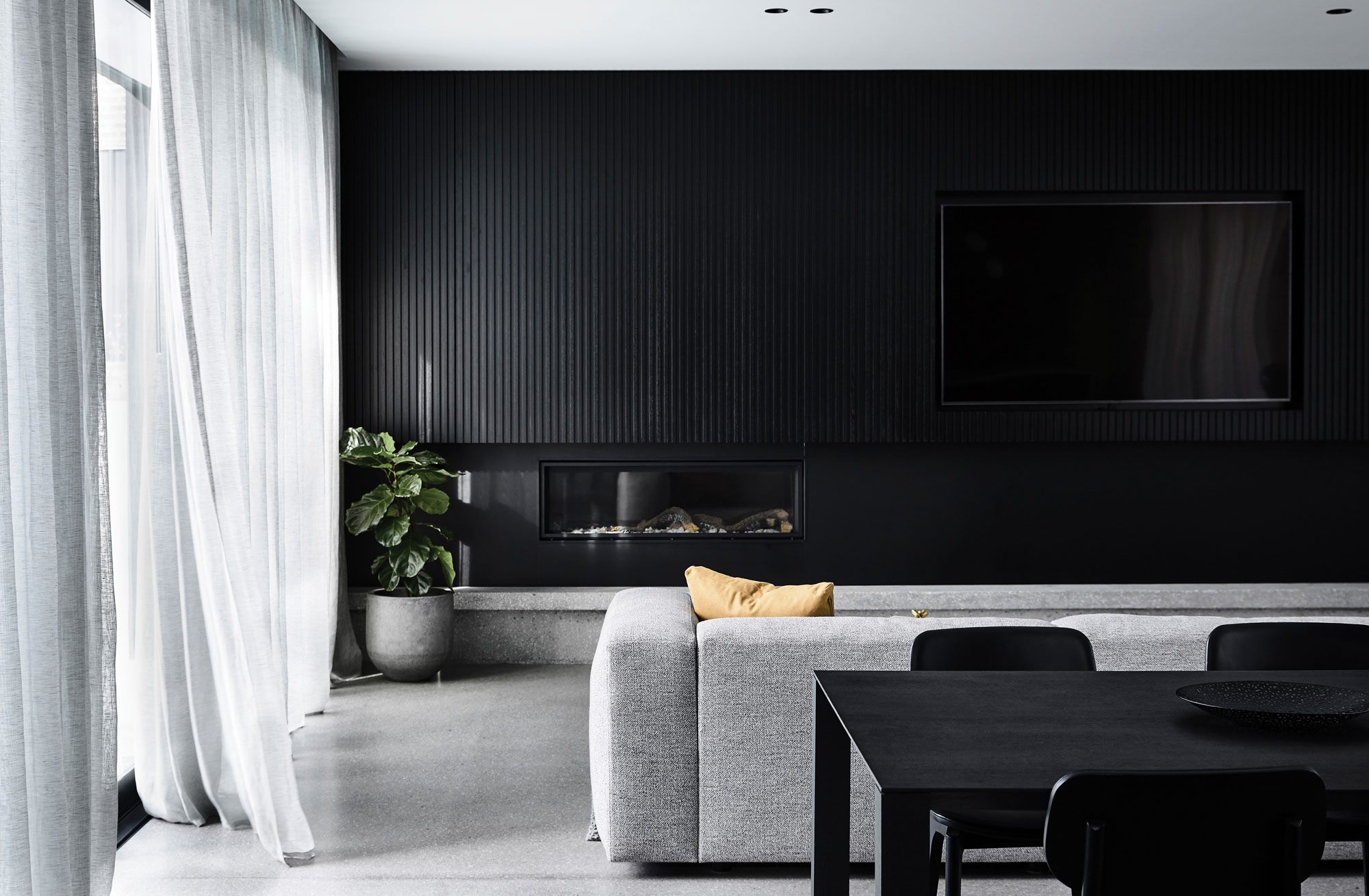 Chiaroscuro lights the way in this Melbourne home

In a project that is fused with light that seems to pour into the home from all angles, the combined elements of architecture and interior design coalesce with beautiful intimacy, writes Inside co- editor Gillian Serisier.

With a design strategy to play with ideas of chiaroscuro, the play is just that. Rather than pose contrasts of shadow and light, the contrast is derived through black detailing and a super abundance of light. It is a small but neat distinction, as it allows all space to be fully and beautifully realised.

The main living area is a large oblong with floor-to-ceiling glass on both sides, north and south.

Here, light fills the space constantly with no need for artificial lighting until well into the early evening. A polished cement floor gives subtle reflections, while the fine linen drapes in pale grey with a black fleck give vertical shadows. The room itself reads as a series of broad horizontal strokes of grey and black, in stone, timber, lounge and cabinetry.

The last of these horizontals is further broken at a lower level with a textural interplay of rug (Halcyon Lake), stone detail (Stonemason MCM Tile and Stone), and the introduction of a circular form via the low black timber coffee table. And while the dining table (Prostoria) and cabinetry (AD Cabinets) are black at each end, the effect of the light renders angles within the surface as slightly reflective and shape defining for being so.

The black slats of the full end-wall of cabinetry, for example, changes in the way it is read as diurnal shifts transpose the dense black to a shimmering screen of vertical slats broken only by the surface distinctions of the also black television and fireplace. 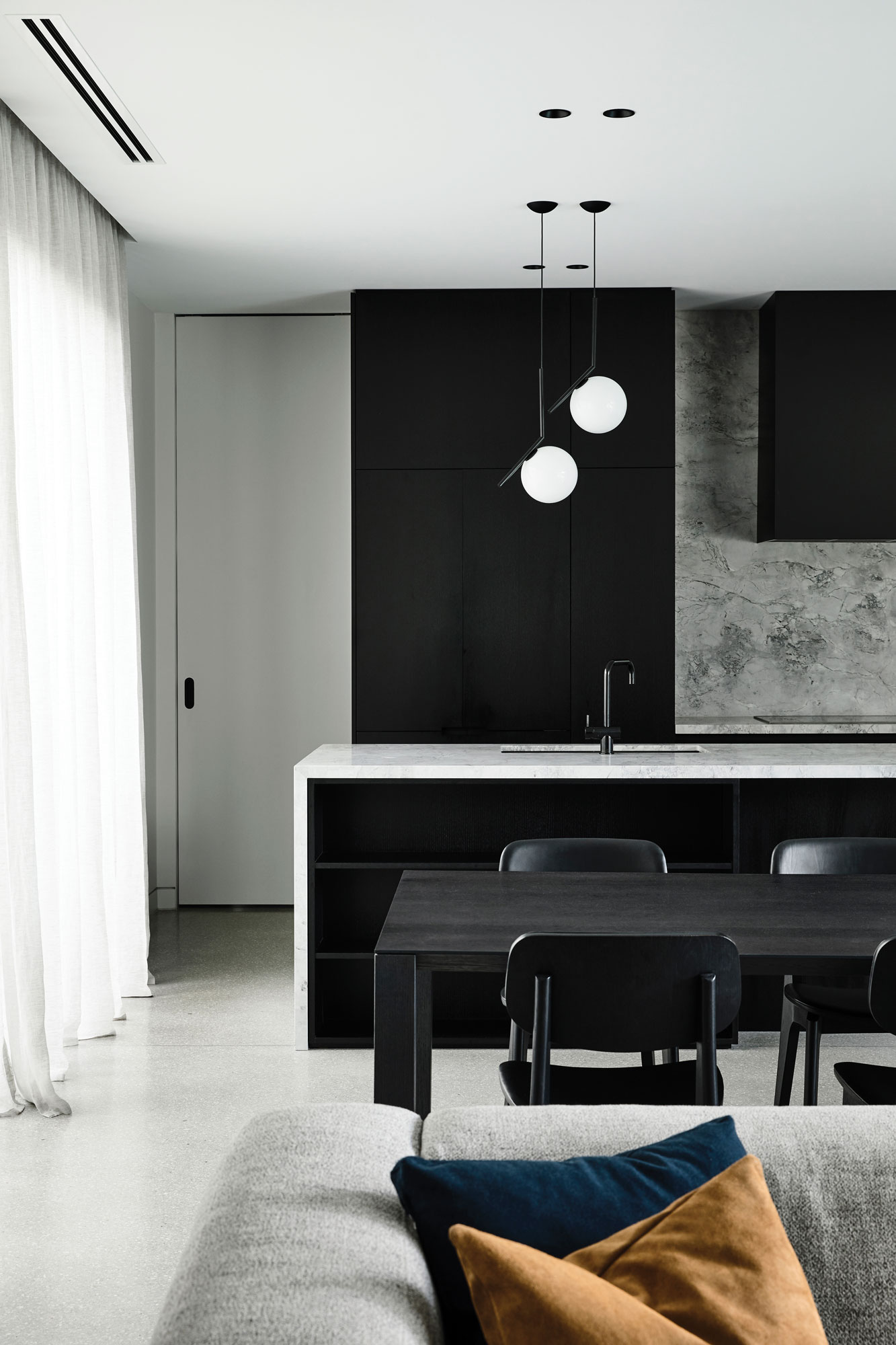 The overall aesthetic is minimal, with a highly contemporary materiality, and while the black and white predominance is bold, there is nothing loud about the design. Instead, a natural graininess informs the whole with nuanced tonal and textural shifts.

The kitchen stone (White Fantasy, CDK Stone), is a sublime piece of marble in soft figured grey that, while used extensively, doesn’t override the room. Instead the combination of dark timber and vertical/horizontal use of the stone disallows all parts to be seen at once. Moreover, in incorporating all tones of the surrounding palette, the stone holds the room.

This language of connection is also explored spatially. The stairwell, as a case in point, is a magnificent void of light due to a well-placed skylight. Here a trio of Flos sphere pendants (Euroluce) with a matt black arm detail (a new iteration for the light) are elegantly sculptural and delightfully asymmetric.

Black detailing on the stair connects the light timber and glass to the whole, while the absolute lightness of the stairwell provides a transition point between work and family or entertainment portions of the home – from study to entertainment or living, for example. And, on ascending to the intimate family portion, there is the delight of a reading nook and truly magnificent three-square metre picture window looking out to trees and a lake from the landing.

As Biasol was responsible for both architecture and interior, the exterior speaks to the interior without dominance. Finished in a matt grey concrete with a handcrafted tactility (Alternative Surfaces) the tone softens the modernist lines. Similarly, a slatted garage door gives the house a slightly concealed manner. Cutting through both of these elements are corners of butt joined glazing for an upstairs bedroom and the study.

From the inside the minimal corner treatment allows an uninterrupted, and this approach suits the office in particular. Perhaps the most minimal office that could be designed, its slim and elegant desk is cantilevered from a built element to appear beguilingly elongated. The slightly rounded chair breaks the angularity, while a long black piece of cabinetry, open at one end, emphasises the rhythm of line established by the desk. 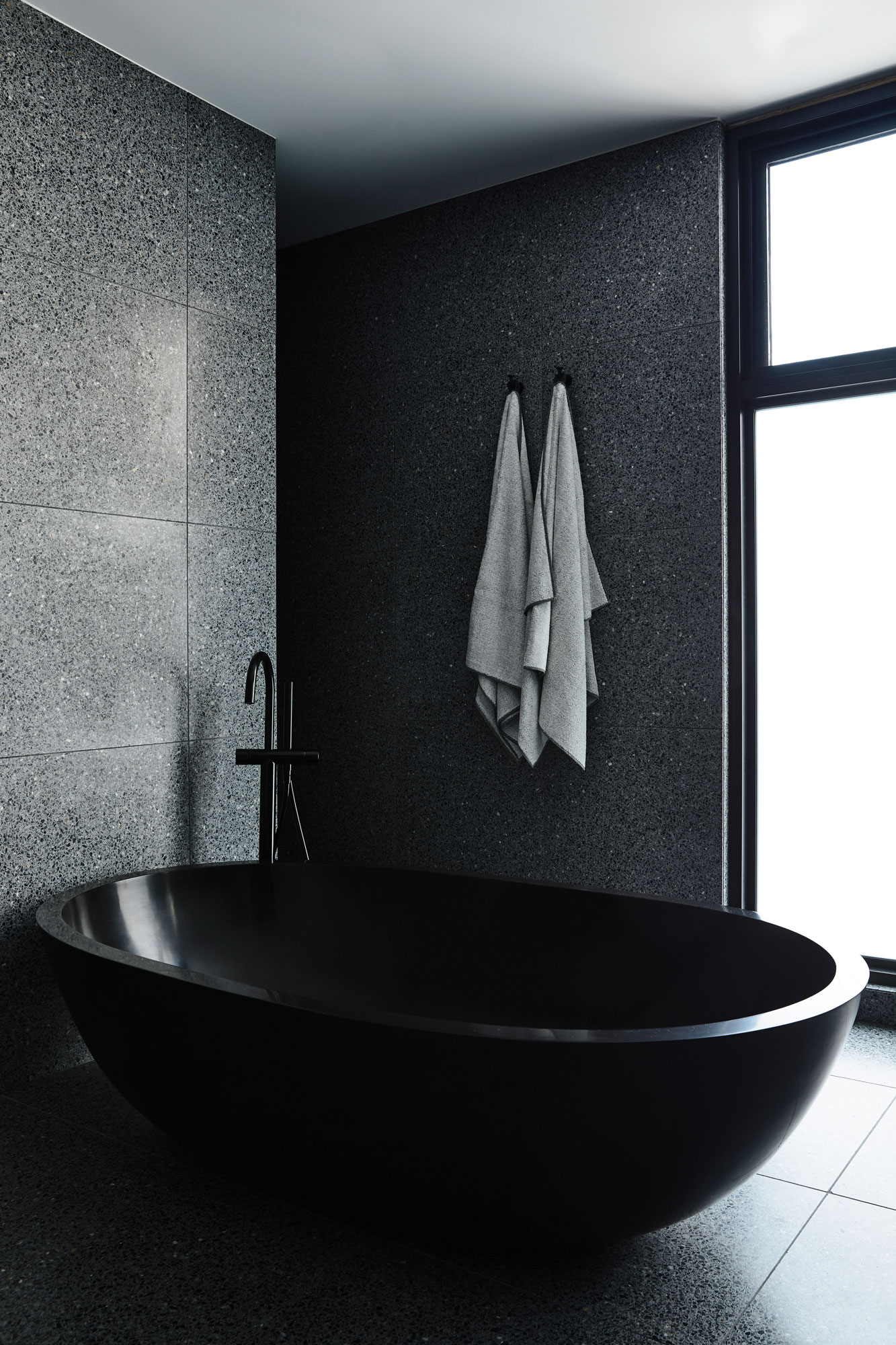 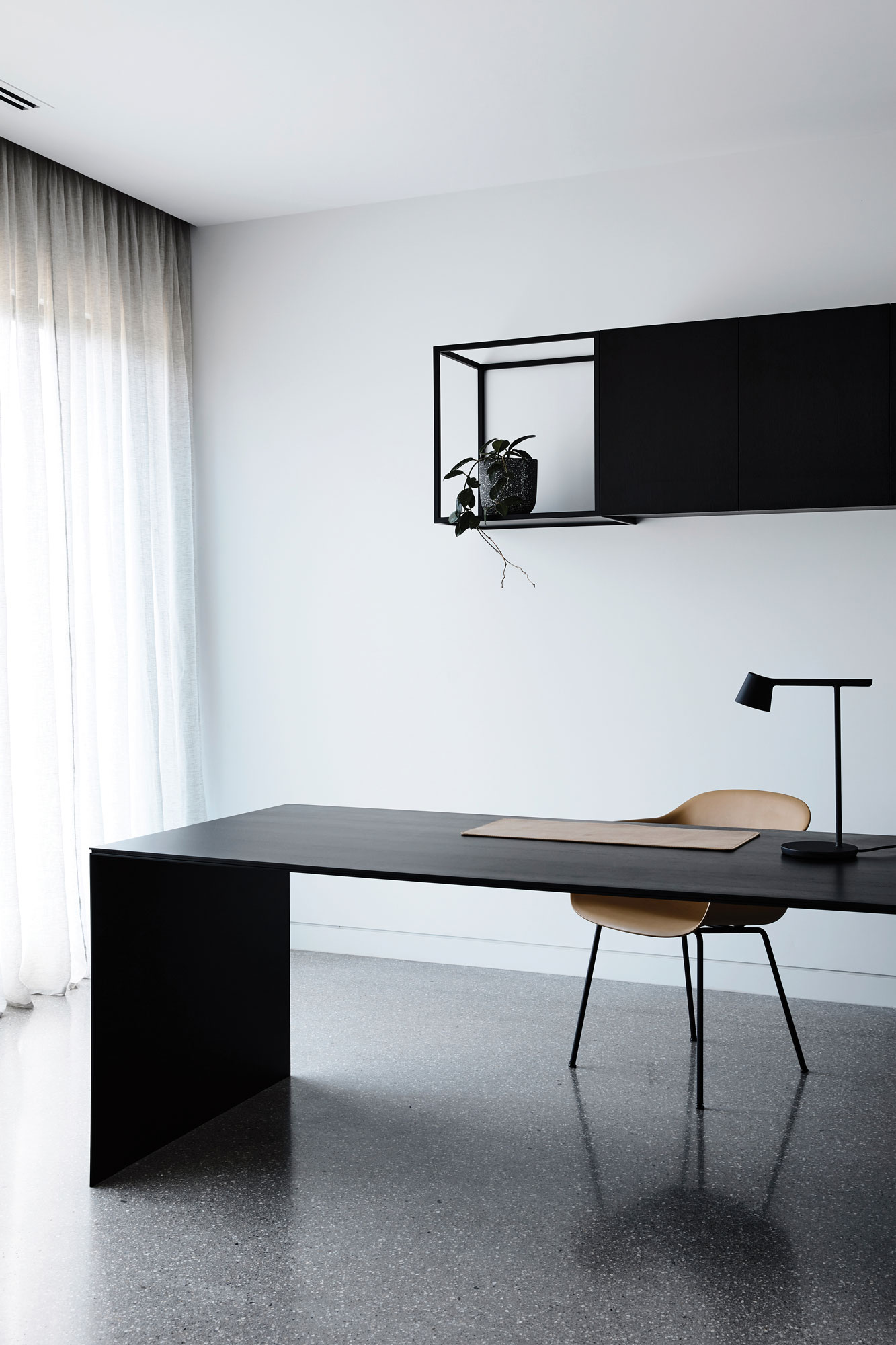 The use of the Flos light throughout the project creates another rhythm, this time playful, as the form shifts from pendant to desk lamps to standing lamp. Similarly, black framing is used throughout on mirrors, windows and within cabinetry. In particular, the bathrooms are extraordinary with large swathes of terrazzo and stone (Fibonacci, Flannel Flower and Eventide) and jet black bathtub (Apaiser): “There needed to be a sharpness of detailing that was bold enough to contrast the use of terrazzo, additionally the black accents allow for a sense of drama between the contrasts,” says Jean-Pierre Biasol.

Central to the home is an expansive entertainment area – comprising an outdoor kitchen, entertainment room, pool and furnished patio (Tait). Ostensibly one large indoor/ outdoor room, there is a connectedness to the elements seldom seen.

The entertainment room, for example, is effectively a large room with a wall of cabinetry to house the accoutrement of a drinks cabinet, bottles, glasses and so forth. It opens entirely to the deck and pool, and an overhanging eave with three large sunlights blends the spaces while offering both shelter and additional light. Within this scenario, the outdoor kitchen reads as continuous to the internal space. Tait furniture lends a contemporary elegance, while a high window above the kitchen frames the space and brings additional light.

Beautifully resolved, there is a quality to the craftsmanship, particularly of the stonework that underlies the project. Sharp crisp edges and rich materiality give the contrasts and light play a surface to perform the essence of chiaroscuro without the moodiness of deep shadow. More- over, the design balances, and uses to its best advantage, the abundance of light.