Home • Interiors • In the name of fashion – Henne by Brahman Perera 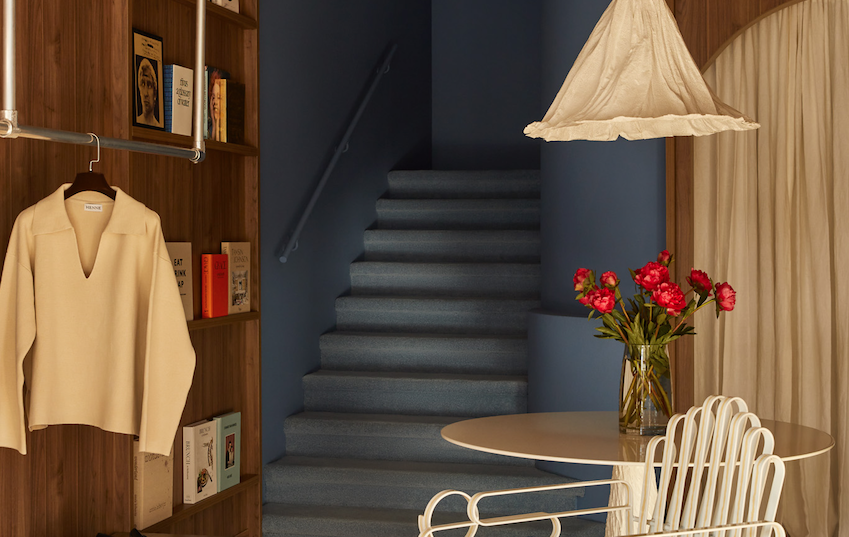 It’s a scene from another time, the sort of experience that Melbourne does so well – or did so well, before COVID – the rise of fast fashion and online shopping. An Alice in Wonderland-type stumbling across a beautiful corner boutique in some inner city suburb, stepping off the rainswept street into a world of deep-veined panelling and lush colours.

Only in this version of the fantasy, the girl is Henne – Swedish for her and the muse of the Australian women’s wear brand of the same name. As for the shopfront, it’s Henne’s first bricks-and-mortar outlet, sprawling languidly across two terraces in Prahran with interiors courtesy of Brahman Perera.

“When you think Swedish, you think IKEA, pale blondes and a pop of orange somewhere,” says Perera. “This is not that. It’s artisan, simple, pared back. The references are there, but it’s gentle.

“You can have these lofty design ideas, but no one is going to know about them because there’s no plaque that says, ‘We did this because it looks like a Swedish kilim.’ Instead, it’s translated holistically. You may not know where the inspiration comes from, but hopefully, it gives you that very warm, comforting feeling of home.”

And Henne Melbourne really does feel like a home. The tight two-storey space has all the hallmarks for which Perera is known – exquisite textures, gorgeous detailing and depth for days. It feels as if every inch has been stewed over and studied, finessed and beautifully executed. This is not your minimalist all-white gallery boutique with burning lights overhead.

The project’s base design thread is the aforementioned Swedish kilim, or a rollakan, to be precise.

“I went to the library and found some really beautiful books on Swedish rollakans,” explains Perera. “Basically they’re woven rugs that mimic Oriental designs, but with bright colours and very graphic, intricate images of shapes and flowers and nature. They are not what you’d imagine when someone says Swedish homeware.”

And while sourcing a true Swedish rollakan would have been amazing, Perera admits it was simply not practical. Instead, the imagery is brought to life through a “casual layering of textures” and tonal colours that “jar just that tiniest bit”.

Perera’s trip to the library followed a cold call from Henne’s founders Nadia Bartel, her sister, Michelle Ring, and their business partner, Laura Broque while the designer was up in the country in his pyjamas, probably trying to start a fire.

inside has spoken to Perera a few times while he’s been at his holiday home in Carlsruhe and the challenges of the fireplace are a near-constant prelude to the conversations.

Aside from its Swedish name, Henne is a Melbourne baby defined by its limited quantity runs and curated ‘drops’. It has, until earlier this year, only been accessible online, where its sleek website speaks of investment pieces and collections designed to work together through seasons and fashion cycles.

Presented with the challenge of transitioning an online retailer into a physical presence, Perera immersed himself in a retail crash course, metering out floorspace for key pieces only rather than Henne’s entire collection.

“The brand has a loyal following with women who shop online quite regularly and know the pieces by name,” he says. “The physical store, therefore, is for those signature pieces you may not want to take a risk on buying online. Henne does, for example, have a lot of beautiful leather items that are more expensive. They’re things you want to try on, so they’re highlighted in store.”

These pieces are on display in what the brand is calling Her Space, set among magazines and old books, small framed paintings and vases overflowing with flowers. Two custom hand-painted Matchbook chairs by Bootleg Studio – one in white with cream, the other in cream with white – hold court in the centre, their steel intricacies balanced by plastered tables by Bieemele. The Red Hill craftsmen topped these custom tables with hand-burnished metal disks, which Perera paired with charred, pitted stools, also by Bieemele, and his own tulip-shaped Belle pendant with its feminine folds and crisp light.

Ascend the periwinkle blue staircase and you’ll find yourself in Henne’s other main space, dubbed For Her. The two terraces are separate on the ground floor but connected by a first-floor landing. For Her is designed for events, workshops, tailoring and consultations.

Fittingly, this styling suite feels even more intimate than the store below. A banquette upholstered in a tribal pattern flows onto the floor and into a kilim-style rug from Halcyon Lake. The woven seagrass walls echo the warmth of the timber panelling in Her Space. Billowy white drapery wrapped around hidden poles separates the room from a handful of change rooms. This is Perera’s favourite space.

“Ann Hamilton is my ultimate. I always go back to [the US artist’s] sculptures when I’m working on a project. It just happens naturally. It’s not like I’m desperate to push her into my work. She’s just such a big influence that I’ll remember a beautiful image of hers without realising it.”

For Henne’s changerooms, Perera was inspired by Hamilton’s Habitus – a 2016/2017 exhibition with a field of gigantic cylindrical curtains that billowed to atmospheric proportions.

“There is this one particular image of beautiful hoops of spinning fabric. I wanted that movement in Henne’s changerooms. “The texture, the drama, the colour. I wanted to capture it all in this amazing room with little more than beautiful fabric hanging in odd places.”