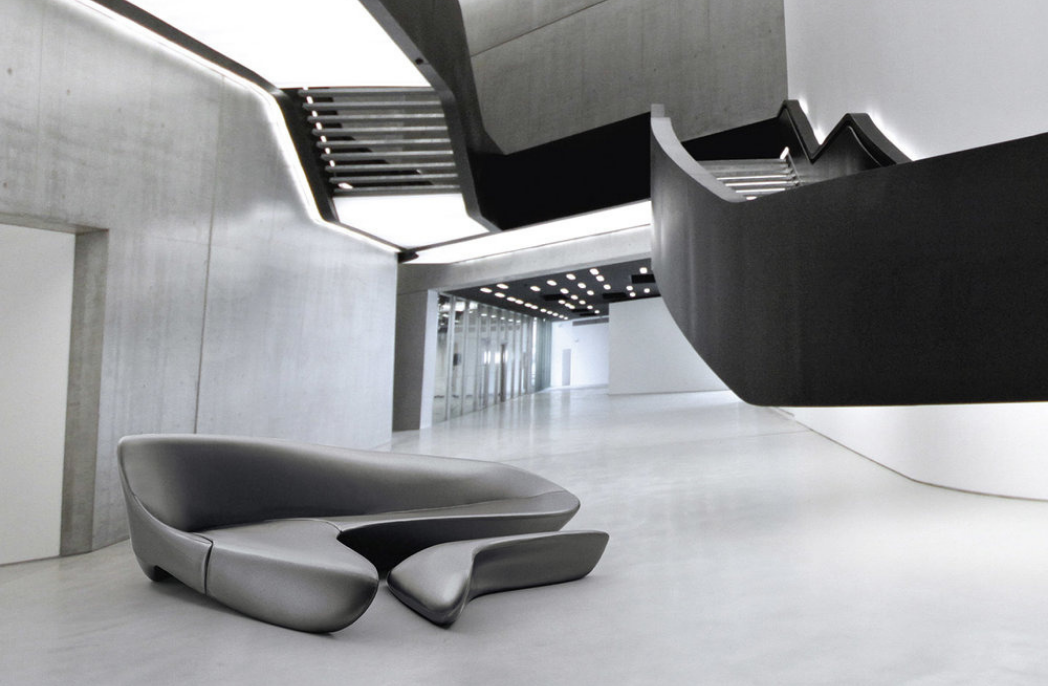 Zaha Hadid Design – the furniture and product arm of Zaha Hadid Architects – made its Australian debut at Denfair last week, where ADR sat down with co-director Maha Kutay.

Famous for her radical deconstructivist designs, Zaha Hadid’s work is unmistakable. Buildings like the Riverside Museum in Glasgow and the Guangzhou Opera House are characterised by futuristic curving façades, sharp angles and harsh materials, such as concrete and steel.

Labelled a ‘paper architect’ at the beginning of her career (meaning her designs were deemed too avant-garde to move beyond the sketch phase) some of Hadid’s earliest projects were designs for products and interiors.

Zaha Hadid Design (ZHD), which is run by co-directors Maha Kutay and Woody Yao, was officially established in 1996, but, as Kutay explains, it really began long before then.

“Some of the pieces that Zaha did in the 80s were sofas for an interiors project in London, that was actually one of her first projects, and those sofas were then commercialised with an Italian company,” she tells ADR.

“So the design business is not something that started in 2006, it started when Zaha started designing.”

Kutay joined Zaha Hadid Architects in 1996 and, aside from a break to start a family, has worked there for the entirety of her career. “I started there and still am there… in some ways this is all I know,” she laughs.

“One of the first projects that I worked on was a tea and coffee set and when I went back to the business that somehow resonated in Zaha’s mind. She felt that it would be good for me to start the design business as a separate company and give it a proper structure and move it on as a proper brand.

“That was in 2006 and, at the same time, Woody was involved in designing exhibitions and some product design. Organically we joined forces and are both now looking after the design business.”

The ZHD portfolio is cross-disciplinary and includes design in fashion, jewellery, furniture and finishes, interiors, exhibitions, installations and set design. Many of the objects are designed as collaborations with other design practices, but there are also creations by the ZHD own label, which was established in 2014.

On show at Denfair was the Moon System sofa and ottoman (lead image), composed of double-curved geometries and the Aria and Avia chandeliers that resemble dripping plastic fused in form, and made from over 50 individual layers of a technopolymer medium.

There were also newer pieces from the ZHD own label collection: the Swirl bowl in crystal glass, which captures the dynamism of a liquefied vortex, and the Cell centrepiece that explores geometric transitions.

All of the pieces are charged with Hadid’s dramatic sense of motion and are essentially object interpretations of her architectural designs.

“It’s all about the same themes that Zaha has investigated in her architecture,” says Kutay.

“Whether it’s working with a typography or with gravity, lifting up the building, the way it lands on the ground; it’s all these ideas that we also carry on into the product, keeping in mind that they do need to be commercial and useable.”

Their creation also comes with some of the same challenges that the construction of her buildings did.

“When we look at fabricating those pieces, usually we are trying to create something that doesn’t exist in the market or that is not understood easily,” explains Kutay. “It’s more about creating a drama into something.

“But with that comes the challenges of production and trying to develop and push our fabricators to catch up with our ideas and to be able to produce them. We are actually helping each other grow, us and the fabricators, to be able to deliver the product.”