Home • Interiors • A coastal surgery with a residential tone 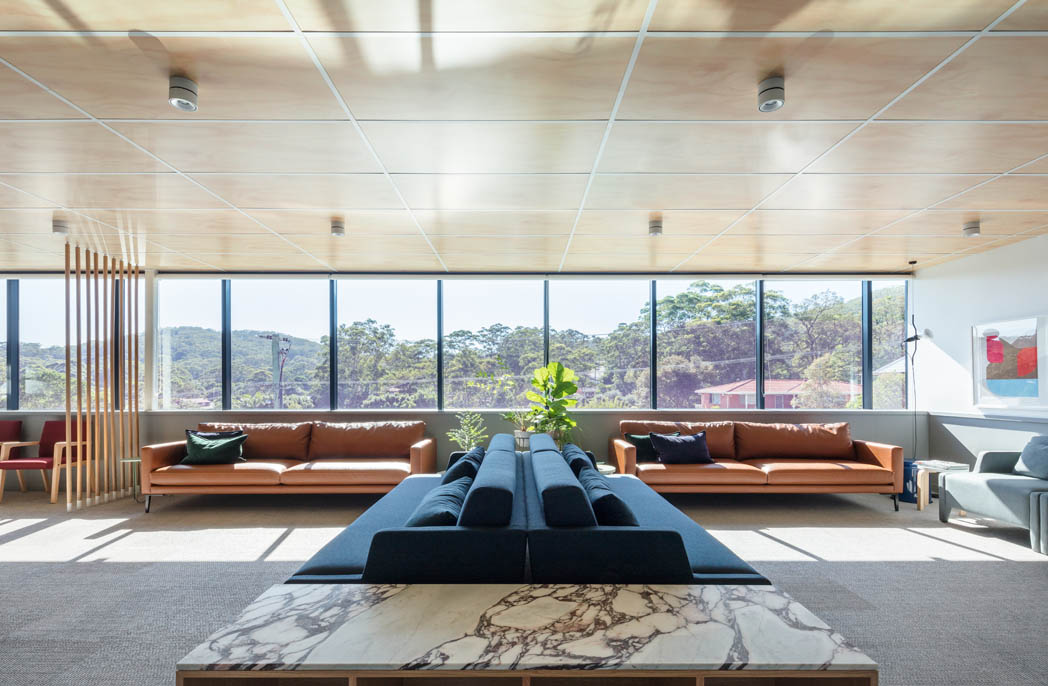 A coastal surgery with a residential tone

When Coastal Neurosurgery in Gosford, NSW turned to Ricci Bloch Architecture + Interiors to overhaul the design of its practice, ergonomic considerations were custom tailored into a contemporary aesthetic.

There is a serene beauty to these rooms that hides an enormous amount of task-specific thought. From a client flow and internal referral perspective, the entire layout has been tuned to function with absolute efficiency.

Details from small waiting room areas that suit a family and afford privacy to side tables that provide additional seating in busy times have all been considered. As has the central reception area that facilitates patients’ wayfaring to the primary surgeon (a spinal expert) and the various spinal focused physicians’ rooms with ease. The layout also gives some of these separate practices the ability to act as stand-alone entities with private access. 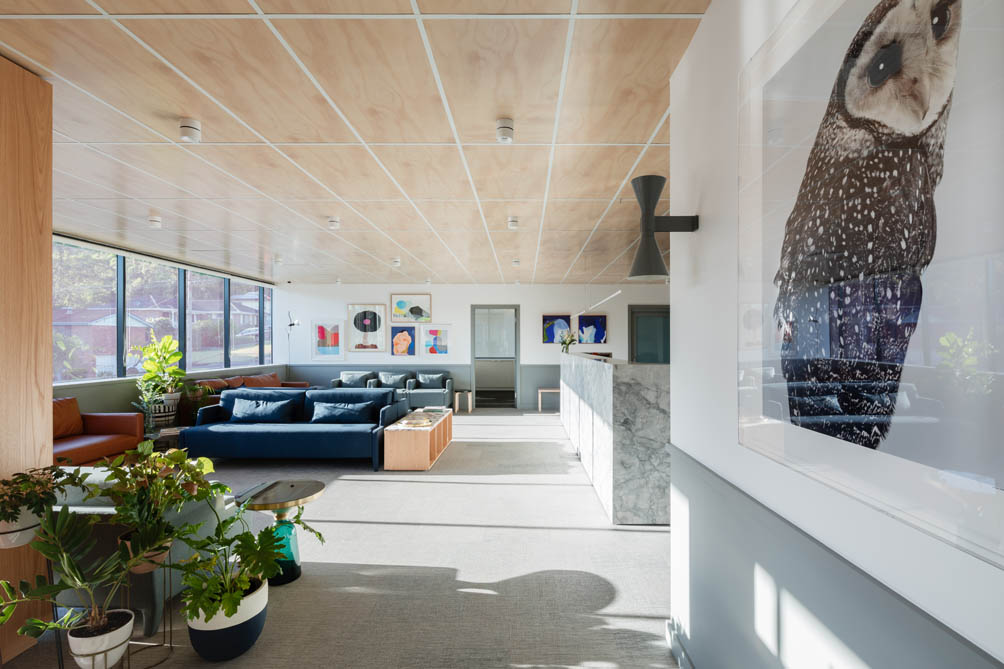 It is Ricci Bloch’s ability to create an exceedingly handsome environment within this utility that makes the project exceptional. Moreover, with a close working relationship with Mobius Build and JP Finsbury Bespoke Joiners, everything was planned, timed, sourced and prebuilt. This allowed the installation to be achieved in the only two-week window the practice could provide.

Advancing a residential ambience, the space is made harmonious with view, art and plantings carefully orchestrated as foils to the room’s purpose. “People go there fearful and scared, so I wanted to make a space that people could feel comfortable in – that was a warm environment and a happy place.

The journey is to arrive, speak to the receptionist, then wait. In that waiting time you may be there for a long while, so to get that feeling of calm before you go in to see the doctor was important,” says Bloch. 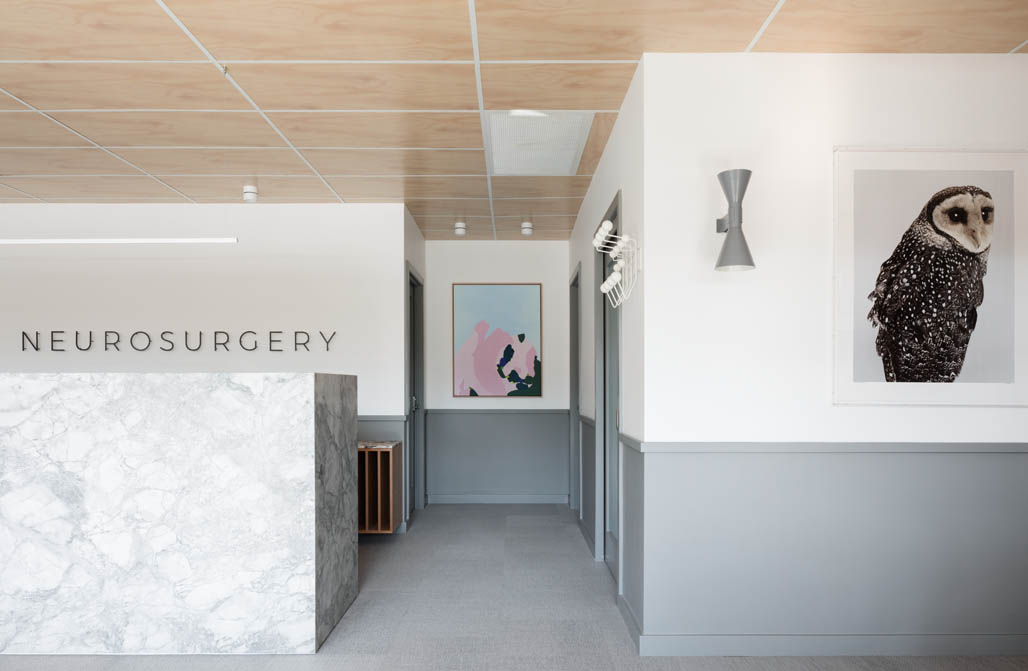 The ClassiCon Bell side table (Anibou), by way of example, poses an interesting choice for a clientele used to the traditional ascetic tone of hospital waiting rooms. So too is the art, with Leila Jeffreys’ large owl photograph, crisp tonal works by Stephen Ormandy (both Olsen Gallery) and vivid colours from Ellie Malin (Modern Times Gallery) and Tom Polo (Station Gallery). Sally Anderson’s large work (Olsen Gallery) completes the overall rejection of a hospital hall of donated brown paintings.

Arranged as a series of merged rooms within a room, the space includes a ceiling-to-floor curtain at the entrance, allowing it to be cocooned for functions. Within the main portion, open sections of custom joinery in American oak play a vital role by dividing without separating spaces.

It also rather cleverly has storage areas for the surgeon to keep a spare set of clothes for those late patient visits that necessitate a ‘straight to function from work’ scenario. Artek 109 clothing racks provide a similar function in the doctors’ rooms. A partial wall of vertical dowels creates a further breaking of the space, while adding more timber to the overall warmth. 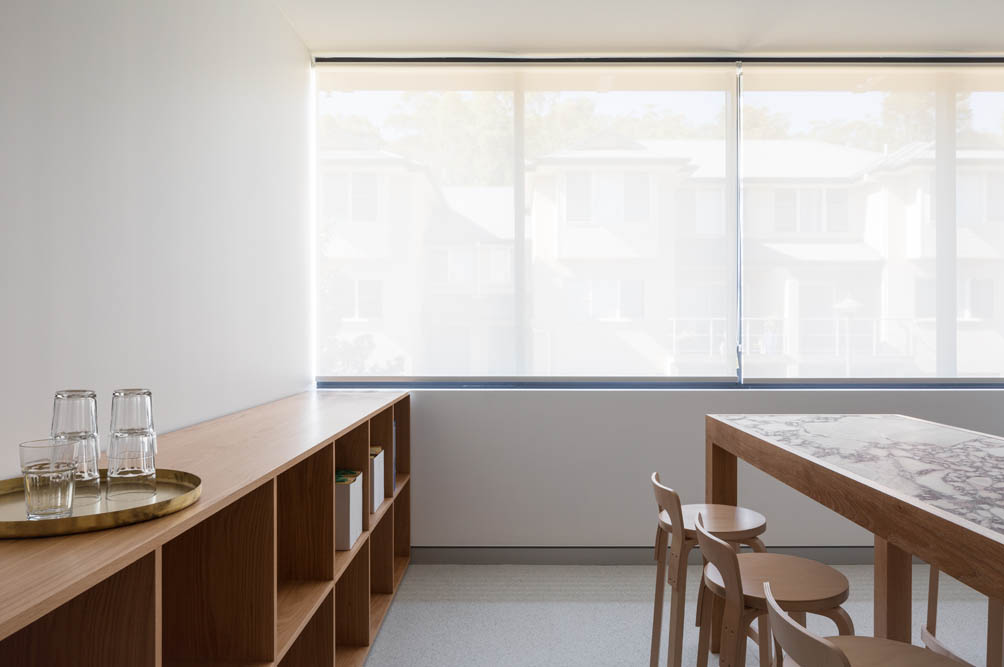 The tonal foundation is driven by a ceiling of ply (Supawood) with a painted datum of grey (Dulux Timeless Grey) and Bolon woven floor tiles also in grey. (This also answers the need for a highly forgiving floor that can have pieces replaced.) Further rejecting the tropes of institutional décor, marble has been used as it would be in a home, with small benches and a reception counter somewhat similar to a kitchen island.

It is a smart choice as, while clinical in the sense of being hard and white, it is also gorgeously natural and tactile. (The marble makes a second appearance as an insert in the large bespoke staff kitchen table.) And herein lies Bloch’s trump card. Rather than create an environment commensurate with the socioeconomic tenor of the region, she has taken an aspirational line.

“I wanted to give the experience that patients may not get unless they go to the city: [Dr] Marc [Coughlan] is a world renowned surgeon doing amazing things with technology and I wanted him to have rooms that reflect what he does,” says Bloch.

As such, technology is embedded throughout the rooms, but as a tool rather than razzle-dazzle. “He had said to me, ‘Ricci, I’m not a plastic surgeon, the rooms shouldn’t be fancy.’ For me, the aim was to make something simple – beautiful but simple,” says Bloch. 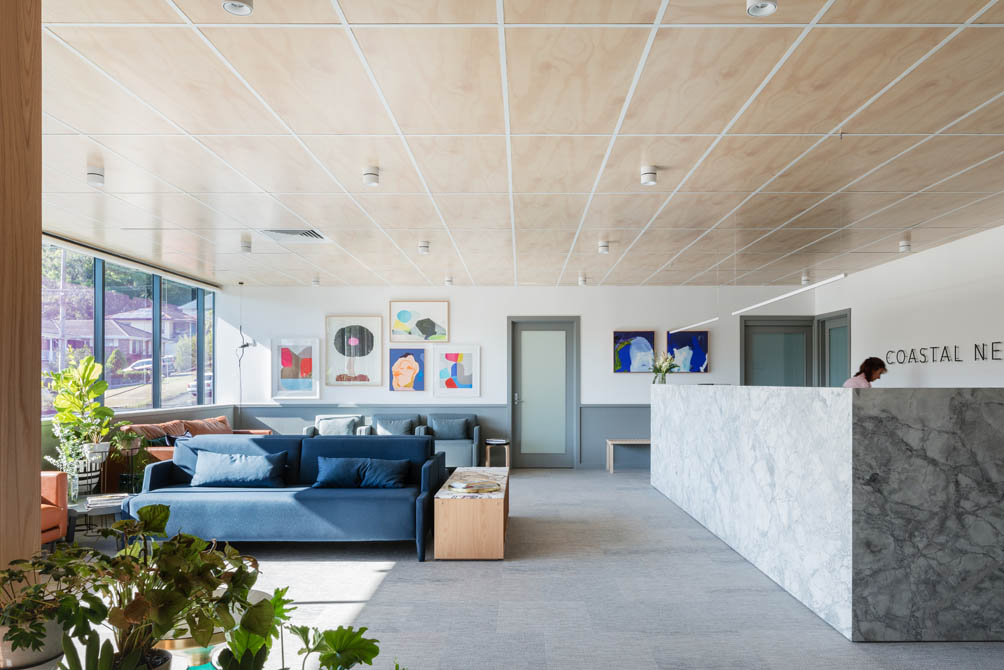 Within the residential tone, the selection of seating is visually appropriate to each portion of the space. That said, there is great ergonomic diversity, with the seating deliberately varied in the level of support and seat height for greater options. The Grazia & Co and Project 82 lounges and armchairs, for example, have been customised for additional support, while hard surface Artek E60 stools and 153 benches (Anibou) provide options for a different range of back problems.

The Sancal Boomerang chair and Wingback armchairs (Ke-Zu) used in the doctors’ rooms have been designed for the healthcare industry and required no changes, while Hay’s About a Lounge (CULT) further augments the options. An end bench of Calacatta Marble (Viola, CDK) stores magazines, but has become at least one client’s favourite seat.

For a seasoned interior designer or architect, the project would be a triumph. As Bloch’s second project as an independent designer, not only is it a triumph, but a great indicator of a brilliant career to come.

This piece originally appeared in issue #99 of inside