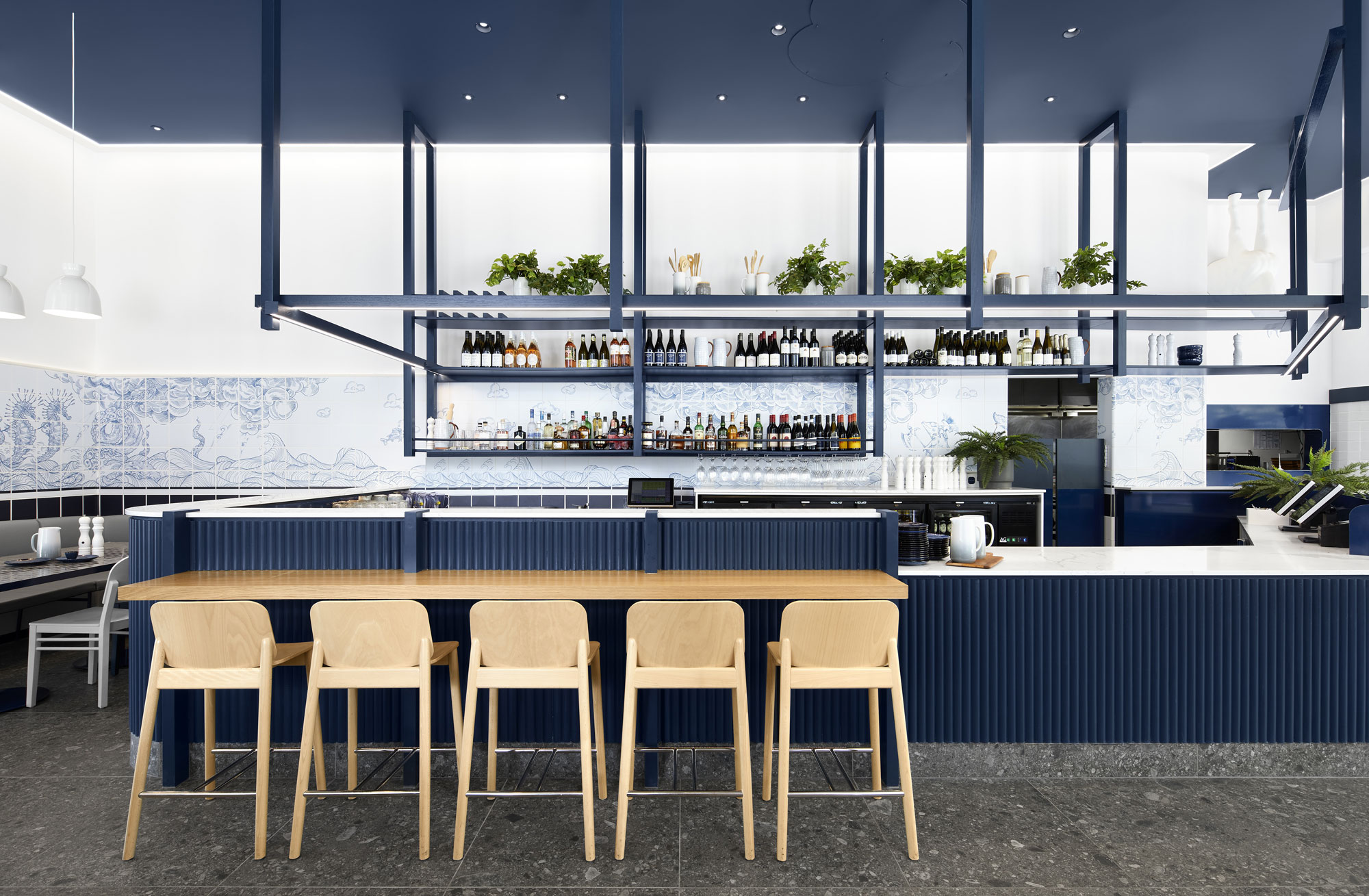 From ceiling to floor, Melbourne interiors studio Blackmilk weaves the story of the mythical adventures of this city restaurant’s namesake, Pony Boy.

Diners follow along as Pony Boy and friends venture to both land and sea, captured in the ceramic tiles that wrap almost entirely around the space.

Their journey ends at a mythical restaurant floating among the clouds, beautifully wrought on the ceiling.

Blackmilk was enlisted by Pony Boy to design their seafood and burger restaurant in the newly opened ANZ building in Docklands.

The focal point is the expansive bar. The L-shaped feature is covered in rib cladding timber panelling painted a navy blue. The colour is repeated on the ceiling, timber panels and shelving, while the bar bench tops are honed-finished reconstituted stone.

Simple wooden chairs are used for the bar seats, kept natural in contrast to the brightly painted seating used elsewhere in the restaurant.

A palette of blue and white might seem gimmicky in a seafood restaurant, but Blackmilk was actually inspired not by the tones of the ocean, but by the antique Royal Doulton china serve ware.

The navy blue against white adds drama and definition to the Pony Boy tale, told in the matt 200mm-square tiles hand-painted with graphic detail by Melbournian studio Pavé Tile. The flooring is ash grey vinyl.

In front of the window, a long booth is fitted with vinyl upholstery in a dark grey. The tabletops are solid European oak mixed in with platinum grey gloss tiles.

Above diners’ heads is a hand-drawn comic-book style graphic, as well as Pony Boy himself in 3D, hanging upside down from the ceiling, chasing his idyllic mystical destination.

Led by Conrad Manolidis, Blackmilk specialises in both residential and commercial projects, collaborating with artists, architects and graphics designers.

The studio has also designed interiors for other Melbourne eateries including Ms Collins on Collins Street and Roco Mamas on Chapel Street.

Other seafood restaurants include a cool and contemporary Grecian resort on Samos Island and fellow Melbourne eatery, Benjamin’s Kitchen, which also picks up on the cloud motif.