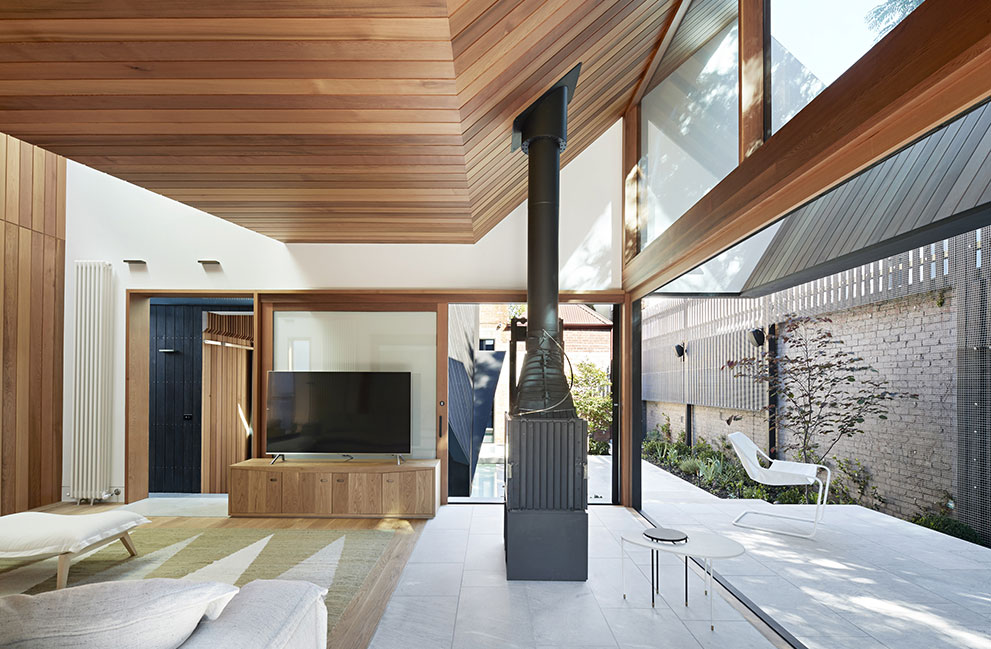 A loose reference to Renaissance Italian architect Leon Battista Alberti’s Of the Country House for a Gentlemen served as a guide for this heritage terrace house, which has been overhauled by Andrew Simpson Architects with Simone Haag.

Hatherlie, as the property is known, is located in the inner Melbourne suburb of Fitzroy and was built for financier Samuel Lazarus, eyewitness to the Eureka Stockade and jury foreman at the trial of Ned Kelly.

The property had a number of characteristics normally found in a 15th-century Italian villa – it’s position at the top of a hill, for one, but also a central courtyard, a line of pencil pines and a centrally located pool – all features that its self-confessed Italophile owners wanted to emphasize in the overhaul.

Andrew Simpson Architects, which won the Emerging Designer Award at IDEA 2009, started by addressing the property’s overheating problems, caused by extensive north-facing brick walls without eaves and a continuous concrete slab that connected exterior with interior, acting as a thermal bridge.

While the front portion of the house remained intact and was restored, the mid-century additions in the centre of the property were demolished.

The new two-storey kitchen and study extension were installed as thermal shields by covering much of the north-facing polychromatic brickwork.

Water, an essential element of any Tuscan villa, was returned to the house through a new reflection pond, which breaks the thermal bridge between courtyard and interior and provides natural evaporative cooling for the living and meal areas.

The original swimming pool was subdivided to provide 40,000 litres of water storage and a stormwater detention system.

The remaining section of the pool was transformed into a large planter for a deciduous crepe myrtle in the courtyard.

The studio describes the built and soft landscape as being “key to knitting the heritage building to the contemporary extensions of living, kitchen, study, laundry and meals area”.

“We worked closely with Renata Fairhall Garden Designs to create a series of overlapping spaces that resist clear definition as ‘architecture’ and ‘landscape’,” it says.

The house sits on a double-width block and has an unusual, smaller gabled roof component that flanks the main terrace. The geometry creates varied spatial experiences, reinforcing the series of stepped courtyards.

Inside, the material palette is defined by the solid cedar wall and ceiling linings. This is matched with solid oak joinery and floorboards and limestone and bluestone paving.

The new living room extension mirrors the roof profile of the gabled roof of the front facade and becomes a raised platform, analogous to the hill and offering extended views to the gardens.

It’s naturally ventilated and uses a fan-assisted thermal chimney on the south side to draw hot air out.

The stables, located at the rear of the property, were demolished to accommodate off-site parking and a guest residence, which is accessed by an external stair.

Like much of the circulation through the house, this is part of a series of circuitous, lyrical pathways that reveal the house episodically.