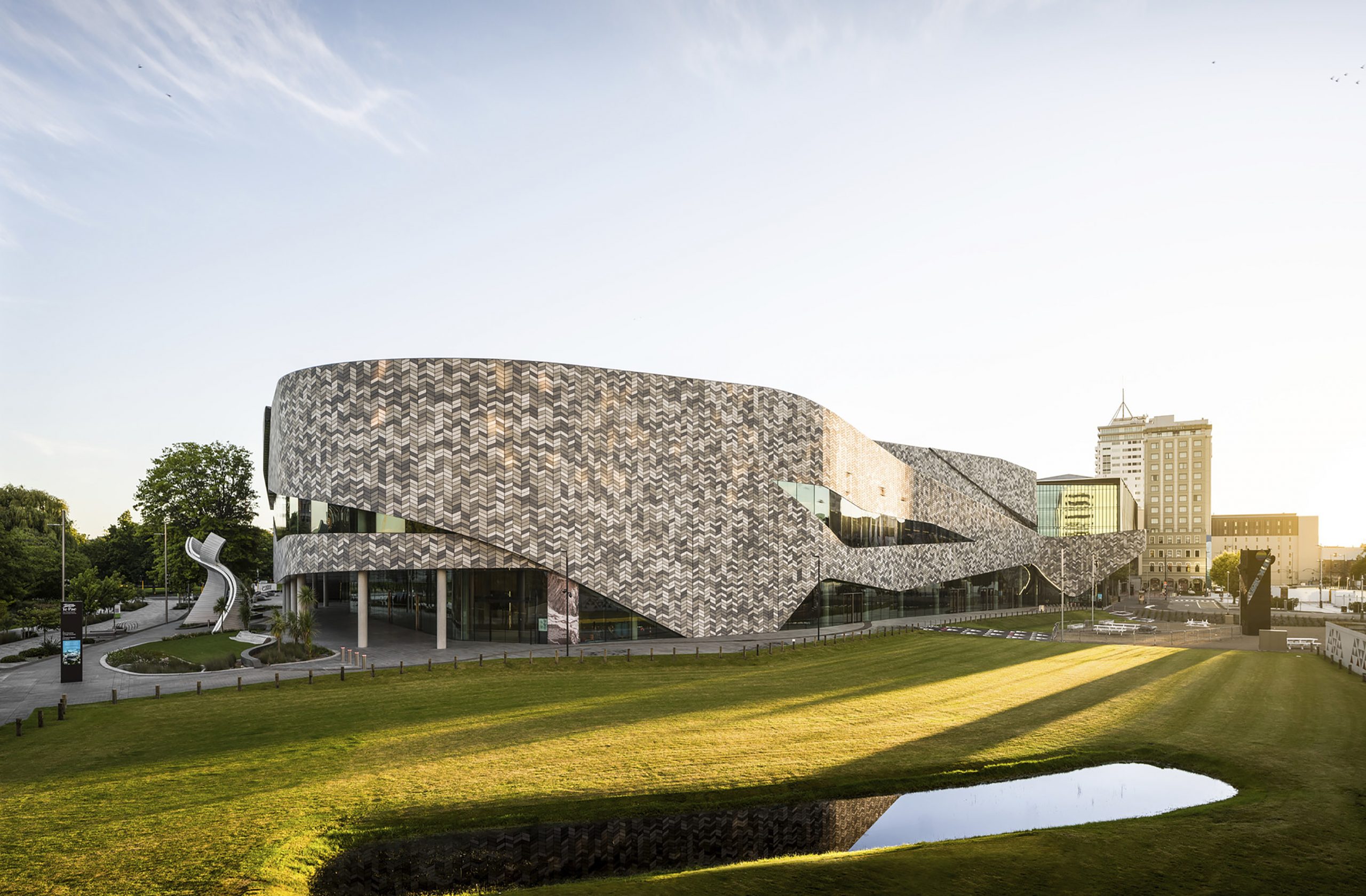 It has been 12 years since the devastating earthquake disaster in Christchurch, with the city being left physically and emotionally broken. Woods Bagot’s completion of Te Pae Christchurch Convention and Exhibition Centre is a testament to the city’s ability to rebuild and regenerate since suffering from New Zealand’s second-deadliest natural disaster.

Originally destroyed in the earthquake and rebuilt 11 years later, Te Pae Convention and Exhibition Centre reflects the region’s multi-cultural heritage and holds its own as a piece of civic architecture in the ongoing re-mending of the city.

It is also one of the 17 anchor projects fostered as part of the Christchurch Central Recovery Plan, which saw architects and urban planners come together for 100-days to collaborate on a recovery program for the central business district affected by the earthquake.

Situated in the heart of Christchurch, the building can house up to 2000 delegates for a variety of events. Te Pae Convention and Exhibition Centre also possesses a 1400-seat auditorium, 3600 square-metre exhibition hall, and 1600 square-metre of meeting rooms overlooking the nearby Victoria Square.

The design of the new building is thanks to Woods Bagot, Warren and Mahoney, and arts and heritage advocate Puamiria Parata-Goodall.

As a proud descendant of Ngāi Tahu, Ngāti Māmoe, Waitaha and Ngāti Kahungunu, Parata-Goodall advised Woods Bagot architect Bruno Mendes on the cultural values and narratives in order to be sensitive to the place Ngāi Tahu / Ngāi Tuahuriri.

“The ancestral bones of the Ngāi Tahu people are in this land. Across the rebuilt city, the new Ōtautahi (Christchurch) reflects both its Ngāi Tahu and European history. Māori language, art and stories are recognised and celebrated like they haven’t been before,” says Parata-Goodall.

“My ancestors have their voice back again in our landscape.”

Flying over the broad Rakai River on his way to a workshop early on in the design process of the building, Mendes was struck by the idea to photograph the distinctive braided riverbed below, which proved crucial in anchoring Mende’s design approach.

And unlike generic convention centres, which tend to be ‘big box’ constructions, Te Pae Convention and Exhibition Centre is smaller in scale and wrapped in a fluid façade, mirroring Mendes’ inspiration for Rakai River.

Nearly 43,000 façade tiles—in five variations, individually numbered and placed—evoke the expansive river landscapes that formed the Canterbury Plains, and which spoke arrestingly to Mendes in the air that day.

The contoured profile of the building reflects New Zealand’s iconic Southern Alps, another influence in the design central to the Ngāi Tahu origin story.

Opting to integrate the facility into the city centre, the architects also turned it to face the river. The main entrance opens to Oxford Terrace and gives visitors easy access to the new waterfront of the Te Papa Ōtākaro /Avon River Precinct.

Mendes says it was important to stitch Te Pae with various nuances of the city to promote local vitality and excite delegates attending events.

“From inside, framed views out curate the site for you. Views from the function room back to Cathedral Square; the opening out onto Victoria Square; the leaning toward the river—these were very specific moves to make the building engage strongly with what’s around it,” says Mendes.

“I think that’s what’s special about the project,” adds Mendes. “You’re connected to Christchurch and it couldn’t be anywhere else.”

Operating from studios in 16 major cities around the world, Woods Bagot designers place human experience at the centre of their design process in order to deliver engaging, future-oriented projects that respond to the way people actually use space, and which flexibly accommodate changes to come.

Earlier this month, ADR spoke with Woods Bagot about the future of work and the workplace and what it means for the industry itself.