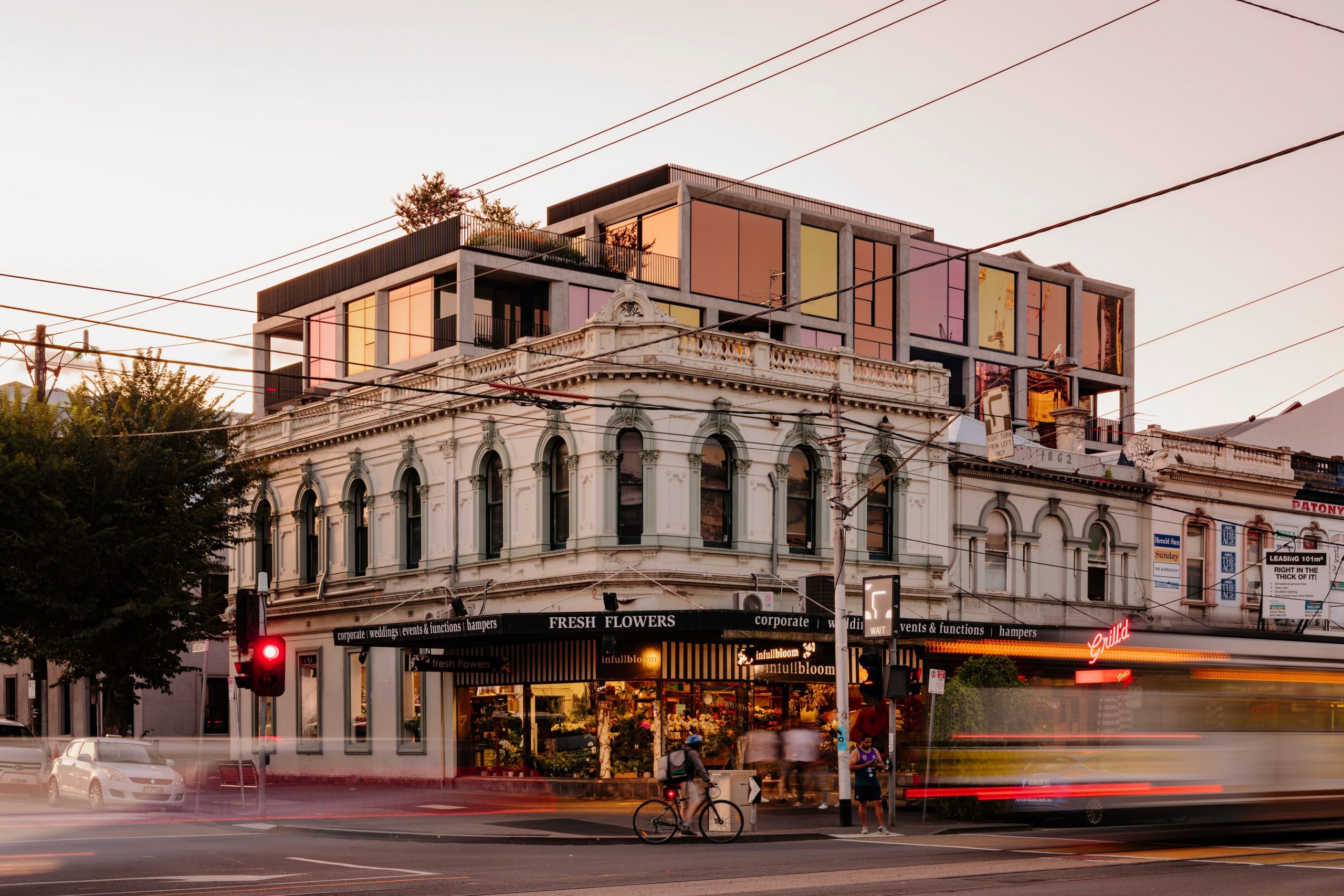 There’s reciprocity between artistic and architectural projects. The influence of Art Nouveau can be seen in the organic-shaped ironwork on the streets of Paris and Vienna. Pablo Picasso and Georges Braque’s Cubism saw buildings become assemblages of parts in the eyes of designers. Crisp, monolithic 1960s artworks by Tony Smith and Kenneth Noland became source material for the raw materiality and ‘orchestrated lack’ that typifies minimalist architecture.

For Melbourne practice Wood Marsh, integrating contemporary art into its architecture is a placemaking strategy.

“There is a sense of responsibility for the building to give back to its public interface,” says Wood Marsh’s founding partner Roger Wood.

“For nearly 40 years Randal Marsh and I have been doing this by embedding aspects of fine art into our work.”

The firm’s approach of architecture as large-scale art installation is made explicit in its mixed-use Piccolo house in South Melbourne’s urban precinct. The project is the collaboration between the architecture practice and boutique luxury developer Piccolo, the new headquarters of which reside on the complex’s top floor.

As one multi-use building, the development encompasses retail, hospitality, commercial and luxury built-to rent multi-residential into one unified concept. “The site and brief for Piccolo house required us to merge diverse building typologies as well as diverse programmatic requirements,” says Wood.

If the building were viewed as an art installation, the critic would name its motif as new meets old. Part restoration, part new build, the project incorporated the restoration of the inherited Victorian terrace building facing Dorcas Street. Wood Marsh reinstated the terrace as an active commerce centre, contributing to the streetscape and connecting with the neighbourhood, while housing private tenancies within.

But the project’s juxtaposition, of tradition and innovation, is most on show when viewed from afar, where the building rises up as a modern monolith behind a stretch of Victorian colonial shopfronts.

“We were able to leverage these Heritage aspects into a desirable commercial hub across the lower levels,” says Wood of the contrast. “The retained base allows the building to interface with the Heritage aspects of the neighbourhood, while the modern upper levels emerge respectfully as a clear step towards the future.”

Brutalist in stature and form, the five-storey complex is punctuated by coloured reflective glass windows that capture the patina of the colonial streetscape. Here, again, art is woven into the project’s language, with the design team describing this perforated boldness as “akin to a block of stone being carved into”.

“Externally, the solid concrete formwork subtly angles towards the glass as if chiselled away,” says Wood.

The work of late Melbourne artist Richard Giblett was a key reference for Wood Marsh. Influenced by his childhood in the ‘on-top-of-one-another’ metropolis of Hong Kong, Giblett’s paintings and installations are close studies of the isolation and connection that occurs within built environments.

Wood Marsh’s use of Giblett as inspiration is overt in the project’s Charles Street laneway, where the artist’s patterns of complex and contemplative urban scenes are reinterpreted using Corten and shades of steel.

But it’s to Giblett’s 2011 piece Light Work that Piccolo house’s pattern bears an uncanny resemblance. With enamel painted on the glass of a fluorescent light box, Light Work is a teeming cityscape where the edges of each skyscraper are only discernible by the glowing dashes of the illuminated windows of offices and apartments.

Yet, unlike Giblett’s eerie and clinical fluorescence, Piccolo house’s glass palette is autumnal. The warm tones have been borrowed from the masonry and brickwork of the neighbouring laneway.

“The intentionality behind this is first to draw inspiration from the surrounding context and then to reflect back onto it,” explains Wood of the colour choice. “It creates an optimistic exchange between existing and new as the colours of reflected light move across the laneway through the day.”

It’s this coloured shimmer that forms the through line across Piccolo house’s interior and exterior experiences. At the building’s entry on John Street, the lobby interior and commercial hub echo the colours of the exterior, the walls featuring bubbles of mirrored glass and blackened metals in the same hues.

On the upper level, Piccolo’s penthouse office reinforces the solidity and luxury of the building. In contrast to the warm iridescence of the exterior, here the palette is intentionally dark, focusing on timber and bronzed metal. The choice of dense Italian-sourced silver travertine as the office’s core texture speaks to Piccolo’s elevated work, while also emphasising the design narrative of stone being carved away.

Architecture as art isn’t a novel idea. But, in the hands of Wood Marsh, there is a subtle and seamless relationship to the iconography of the sister discipline that’s rarefied air. As a site responsive installation piece, it opens an ephemeral dialogue between the existing and the new.

Established by Wood and Randal Marsh in 1983, Woods Marsh is a Melbourne-based architecture practice. Its most recent project, a surf lifesaving club, takes inspiration from the “corrosive nature of Victoria’s sandstone coastline”.