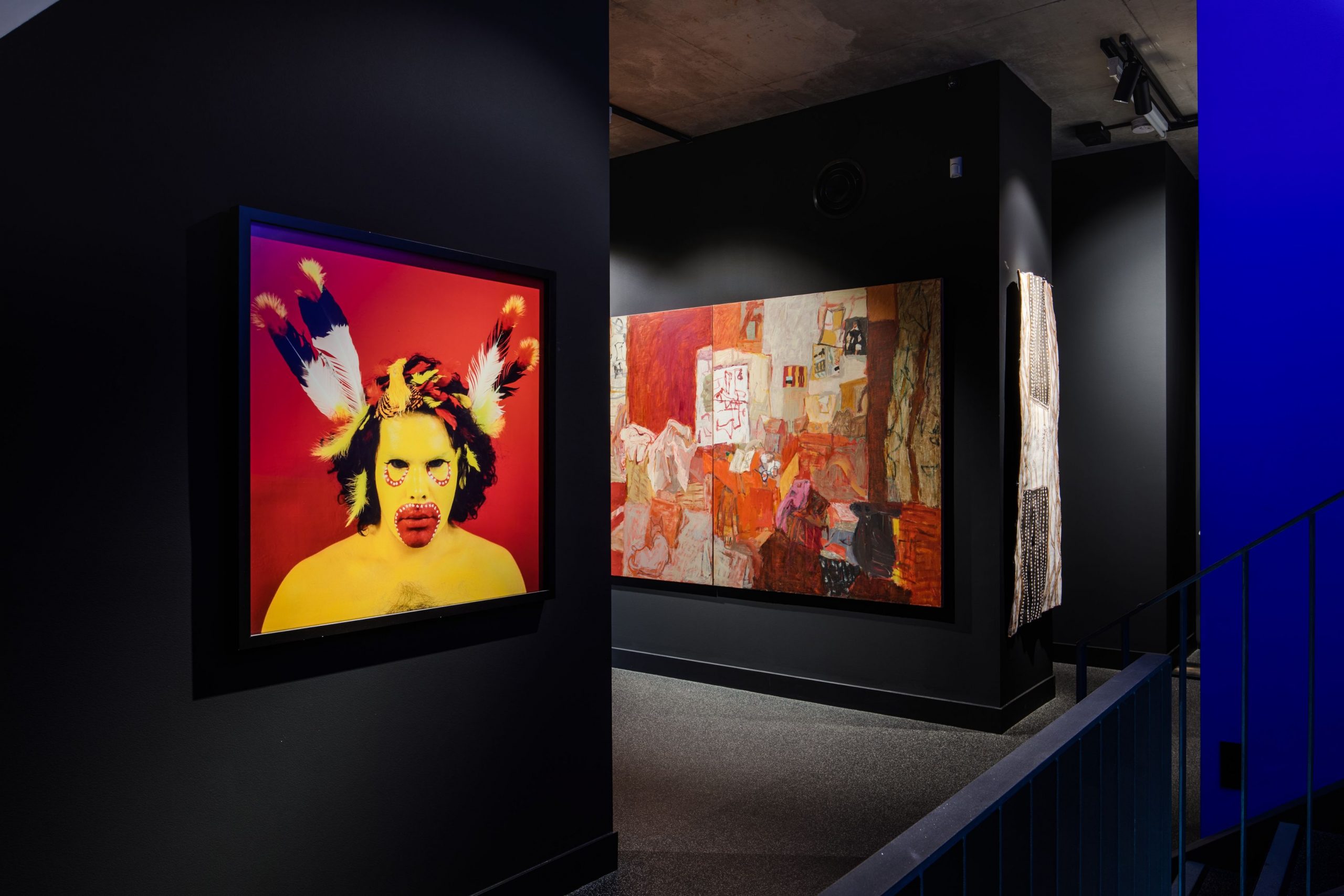 Architecture can be both a business and a vocation, but what happens afterwards? ADR tours Justin Art House Museum (JAHM) with Charles Justin – one of the founders of famed Melbourne practice SJB – to find out.

If you’ve ever found yourself traversing the busy residential stretch of Hotham Street in the inner Melbourne suburb of Prahran, chances are you’ve spotted the protrusion of a vast and intriguing geometric building that stands out from the crowd of suburban apartments surrounding it.

As astounding inside as out, Justin Art House Museum (JAHM) blurs the delineation between art and architecture purposefully.

The passion project of Charles and Leah Justin, it was partly inspired by their love of Kew’s Lyon Housemuseum, another purpose-built institution combining art gallery and residence.

A spacious main gallery sits on the first floor, with their gorgeous apartment on top. Downstairs, art hangs on the wall of the glowing foyer, but is also built into the fabric of the building.

The staircase shows off an interactive lightbox commission from artist Ilan El. The glazed walls of the adjacent lift feature an abstract work by Tasmanian artist Paul Snell. Even the façade is canvas.

Opened in 2015, the kernel that would grow into JAHM came to the Justins as they were navigating the shape of retirement. She was a director at the Jewish Museum of Australia, and he co-founded architecture firm SJB with Alan Synman and Michael Bialek.

SJB was structured with a succession strategy built in.

“Basically, get the old guys out and let the young guys come through,” says Justin.

Moving into retirement, they wanted a home that was more accessible, but that would also house the 300-plus artworks in a collection they’ve been amassing for 40-odd years.

It’s a collection they are passionate about sharing with the public on intimate tours of no more than 25 people.

“It’s rare for the owners of house museums to conduct tours themselves,” Justin notes with a wry chuckle.

“Usually collectors are either too rich or too busy to expose themselves to the public.”

Justin says JAHM was a great solution for a meaningful life in retirement.

“It’s both intellectually and socially stimulating. We meet so many interesting people and, educationally, we’re learning so much.”

Their collection is currently in storage, because sharing the life work of fellow art obsessives was part of the original mission statement.

The current building-wide exhibition Storylines and Songlines is on loan from good friends Arthur and Suzie Roe, who came on the very first JAHM tour.

It showcases works by First Nations and non-Indigenous artists side by side, asking visitors to consider their place in contemporary Australian art.

“We really get into an in-depth relationship with the art and act as facilitators, leading people through exhibitions that are thematically curated.

“After each tour, people come up here and the table is groaning with food, so they can have something to drink and discuss what they’ve just seen. We’re trying to create this idea of a soirée, like a salon.”

The Justins were canny about erecting the financial foundations for JAHM while still working. Charles looks at the cost of running the house museum practically, too.

“It’s almost equivalent to someone owning and running a holiday house. So it’s just the choices you make in life, what you want to do with your assets and resources.”

Keeping things in the family, the multistorey building was designed by their daughter Elisa, founder and director of Justin Architecture.

It shows off its unusual shape internally and includes an expansive balcony with a view to the city skyline and to gum trees. The apartment is every bit as much a part of the tour as the gallery below, with tall, long walls and glass cabinetry.

“The first three I did, and this last one by Elisa, albeit I was interrupting. And this is, by far, so much better than the first three.”

With intelligent flow, an abundance of light and many hero moments, the magnificent result is a testament to family, and to their passion for sharing art.

“We wanted to create a place that had inherent flexibility to it. That’s why there’s track lighting in every room. We’ve got screens so we can enclose and compartmentalise the place.”

The Justins are clear that their love of collecting is exactly that. They are avowedly not investors.

The journey began when Charles designed a home for a friend as a favour in the earliest days of his 40-year career at SJB. He was rewarded with the opportunity to purchase one piece of art, with no budget limit imposed. The work they chose cost $400 when he was earning about $100 a week.

“We’ve never sold a work, because we regard the collection as a diary of our lives. We collect a lot of emerging artists, and we don’t have labels [n the museum], so people don’t know whether it’s someone famous or an unknown.”

Charles is fascinated by the dichotomy between art and architecture, so much so that the Justins invite an architect to speak at JAHM twice a year.

“What it does is address that question: when does something become a work of art? What’s the tipping point? If you go to the National Gallery of Victoria, you see in their applied art section they’ve got chairs and pottery and dresses. Well, why did that stuff get selected and others didn’t?”

Justin says, while a practising architect, he was very conscious about delivering on the client’s needs.

“The functionality of it, the utilitarian part, and also hitting a budget. In some ways, art is freed from that.”

But he doesn’t see them as separate ideals.

“I think art is in every aspect of your life. Somebody will talk about the idea of living an artful life. What does that mean? I think it’s imbuing your life with another dimension above existing. This sort of elitist view of art as what’s in a museum? I don’t think it applies, because you can fill your house with art.”

During their tours, Leah often introduces the idea that a museum is a collection of artifacts, and that those artifacts in themselves unlock a story.

“She says that when you walk into someone’s home, it’s full of that stuff,” says Justin.

“Every object holds a memory. And so we take a much more expansive view with regard to what constitutes art.”

One trip to JAHM, and you’ll be convinced architecture is art.

To discover more about JAHM and its exhibitions or to book a tour, visit www.jahm.com.au.

This week, SJB picked the Grand Prix Australia Winner at the 2021 Dulux Colour Awards, bringing a “sense of play” to a changing neighbourhood five kilometres from Sydney with a Spinach Green-coated office and childcare centre.