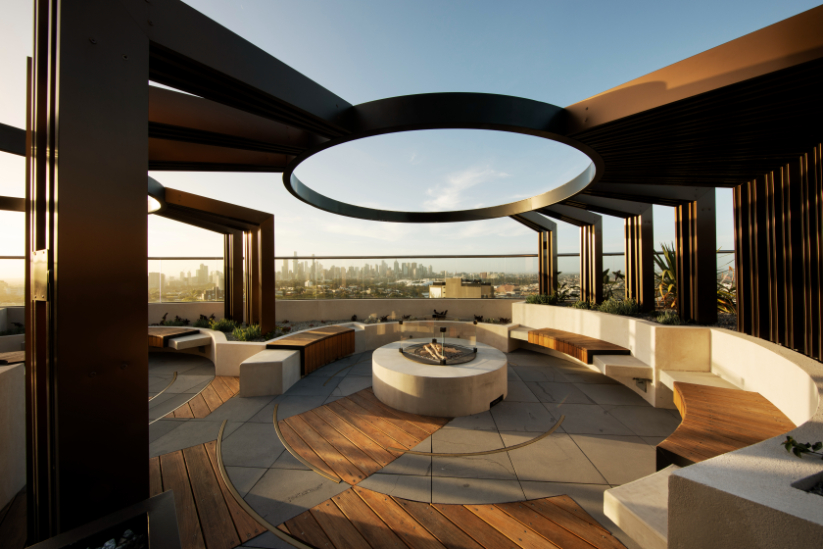 Yarra One by Fender Katsalidis is an apartment tower that gives more than glass, timber and steel beams to its South Yarra neighbourhood.

In this video, ADR takes you behind the scenes of Fender Katsalidis’ Yarra One with Hurst to uncover an architecture, design and urban landscape that are as beautiful as they are inspiring.

Sure, many of its incredible facilities – from the heavenly scented sauna and spa to its majestic private dining room, wine cellar, library and rooftop garden – is strictly for residents only.

But none of these are Fender Katsalidis associate director Sarah Hurst’s favourite features.

Part of Yarra One’s design team, Hurst is besotted by something entirely different – the expansive Atrium that connects the apartment tower with the street.

A connecting thoroughfare for pedestrians to walk from Chapel to Claremont Street, through to South Yarra Station, the Atrium is an expansive umbrella of glass panels and timber beams that feels distinctly cosmopolitan and international.

On the day, ADR visited to shoot its house tour, the Atrium is bustling with a ground-level coffee shop and people lounging on its concrete steps and timber benches.

“The Atrium is a really special place in Yarra One,” Hurst tells me.

“It’s being used for the exact purpose we designed it for and that’s really really comforting and really joyful to see.

“To see people engage with and occupy the space, sitting, reading, on their phones, having a break, taking a moment and just occupying the space is all I could have asked for as a designer.”

Of course, the interiors of Yarra One’s apartments are just as enticing if all the more exclusive.

There is a focus among the bespoke joinery, grained timber floors and marble benchtops on sustainability. Fender Katsalidis has designed these homes to grow with their occupants to support multi-generational living and ageing in place.

The building itself has a 4-star Green Star rating with rooftop solar panels to harness renewable energy and rainwater harvesting to create a reutilised water source. Even the Atrium was designed to reduce urban heat island and wind tunnel effects.

But sustainability is also a question of longevity. No more this is more apparent than in the kitchen, where the architectural firm has continued its longstanding partnership with the global appliance brand Miele.

Working closely with Miele, Fender Katsalidis specified ovens, cooktops and rangehoods for all Yarra One’s apartments, as well as integrating its appliances in other areas.

But it was the ease with which Fender Katsalidis was able to include Miele appliances in the project’s areas as well that really impressed Hurst.

“For residents to be able to use their Miele appliances in their apartments and then enter the common kitchen, for example, and immediately use the oven there as well, was so appealing to use,” she says.

“It just extends that feeling of home throughout the project, which is all the more important in 2022.”

In this video, ADR takes you behind the scenes of Fender Katsalidis’ Yarra One with Hurst to uncover an architecture, design and urban landscape that are as beautiful as they are inspiring.

Miele: We’re looking to recognise innovation in our industry