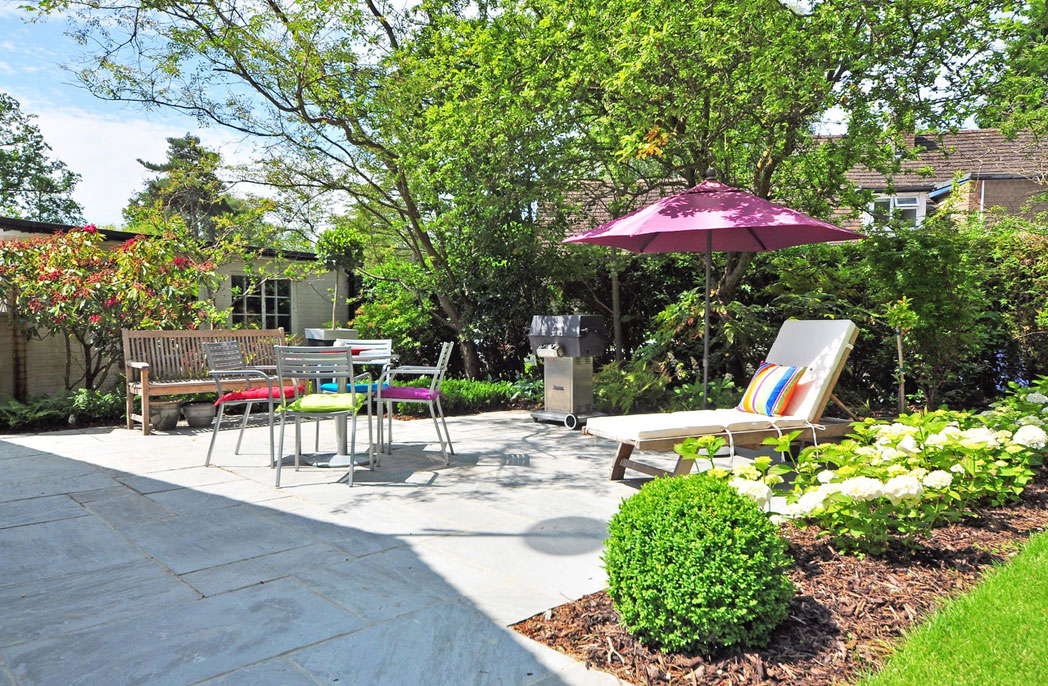 In March 2017, the Victorian Government changed building regulations in an effort to protect the Aussie backyard from being swallowed up by denser subdivisions and new housing developments. New buildings in the Neighbourhood Residential Zone (NRZ) and General Residential Zone (GRZ), which is the vast majority of suburbia, now require a minimum garden area of between 25 percent and 35 percent (see below).

‘Garden area’ is very loosely defined in the State Government fact sheet, which makes it particularly difficult if you’re a landscape architect or homeowner designing an outdoor area for a new home. For example, does a roofed pergola count as ‘garden area’? And how do these rules work with the existing site permeability requirements? As professional paving installers, we’ve had several landscape designers and builders ask us these questions, so we’ve contacted the Department of Environment, Land, Water and Planning (DELWP) for clarification. We’re told the department is still working on definitions for edge cases, but in the meantime, here is what we know about the rules in relation to paved areas.

What is a ‘garden area’?

Garden area does not include:
– Driveways or areas set aside for car parking,
– carports,
– buildings or roofed areas,
– garden sheds, and
– spaces less than 1m wide (eg. narrow garden beds at the side of a driveway).

One landscape feature that remains in a grey area is covered entertaining areas. Many people would consider these an open entertaining area, yet they are often roofed. While verandahs attached to the house are explicitly excluded from garden area, pergolas and cabanas are more ambiguous. Our advice from the DELWP is that if the structure has an open roof (wooden beams for example) it may be considered an open entertaining area and therefore included in the garden area calculation. If the roof is completely closed then it may not be included in the garden area calculation. It’s unclear how an entertaining area with a manual or motorised louvre roof would be treated, as these areas have open roofs at some times, and closed roofs at others.

At present, it is up to individual councils to review your plans and rule whether your structure is an open entertaining area or a roofed building. This is despite the fact that the garden requirement is a mandatory State Government regulation, specifically defined as unable to be varied by local councils through schedules to the NRZ or GRZ like most other state regulations. If the homeowner or builder believes that the council’s interpretation is incorrect, the matter can be decided by VCAT.

Does this replace the site permeability rule?

The new minimum garden space requirement has a great similarity to the site permeability standard, clause 56.07 of the Victoria Planning Provisions. It varies between councils, but typically between 25 percent and 40 percent of your site must have a permeable surface (garden beds, lawns, gravel paths and permeable paving) to balance anything that drains into stormwater (buildings, solid concrete, pools).

What about site coverage and other requirements?

As with site permeability, the site coverage requirements in clause 54 and 55 of the planning scheme are unaffected and must still be met. Under clause 55.05-6 B30, your house also needs to have convenient access to at least 6-cubic-metres of externally accessible, secure storage space (typically a shed). Sheds and storage spaces also subtract from the garden area calculation, so it’s vital that they’re planned at the start of the house design process. If every available square inch is taken up by the house without considering the shed, it may need to be redesigned to fit!

What’s next for these rules?

While the aim of these new requirements is well meaning and will promote a greener city, it’s likely the implementation will be a little rocky to start with. We would welcome a clear definition of open entertaining areas from the DELWP. Until then, it appears the best option is to consult with your local council.