Home • Architecture • Making the most of small spaces: 9Point9 Architects 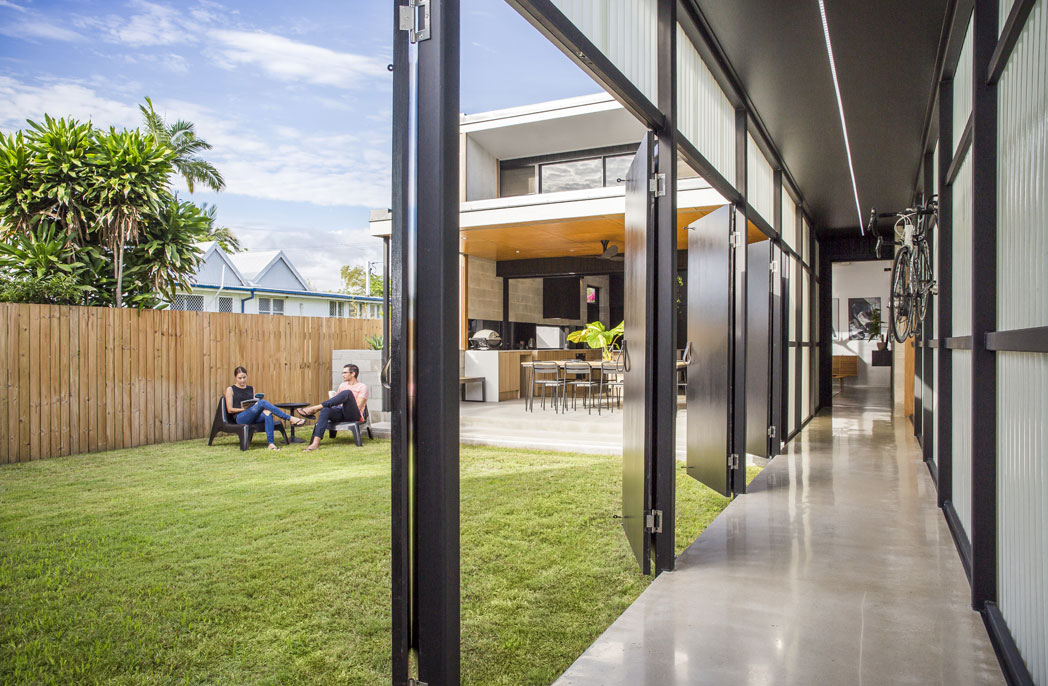 Making the most of small spaces: 9Point9 Architects

In South Townsville, rather than referencing the prevailing Queenslander typology, Zammi Rohan of 9Point9 Architects looked to the cities for a flexible model when it came to designing a new house for a young professional couple. His response was an inward-looking courtyard house that was named House of the Year at the 2016 North Queensland Regional Architecture Awards.

Laneway house occupies a block just 10 by 50 metres, with a west-facing street frontage and a laneway to the east. The challenge for Rohan within this narrow envelope was to get privacy into the house while maximising outdoor space. The norm would be to compress the building at one end of the site, leaving an ornamental front garden and a detached backyard. Instead, Rohan split the program into two pavilions, pushing them towards the front and rear boundaries, with a long enclosed garden in between. He located the main entrance on the side (instead of the front) avoiding the need for an internal corridor.

In the first pavilion are two bedrooms, bathroom, laundry, kitchen and living area, which opens to an outdoor (but undercover) dining room. “Our tropical climate allows us to live outside most of the year,” says Rohan. The second pavilion has the master bedroom, study and a carport to the laneway. The two are linked by a steel-framed corridor clad with polycarbonate, screened from the courtyard by a wall of pivoting doors that can incrementally open to the garden allowing variable uses, especially when entertaining groups on hot days when the cool raised concrete of the breezeway doubles as a seat around the grass.

In many ways this is a Sydney or Mlebourne house in its rationale, yet perfectly tuned to tropical Townsville.

“Openness and privacy were very important for the clients,” explains Rohan. His design asserts a contemporary presence in a ‘character precinct’, not just in its interior planning, but in its materiality – concrete floors, reverse block veneer walls and steel mesh screens. This tough outer skin manages heat and insulation well and meets the clients’ brief for raw finishes and minimal maintenance.

In many ways, this is a Sydney or Melbourne house in its rationale, yet perfectly tuned to tropical Townsville. “The clients wanted a more urban aesthetic, and the construction strategy gave us that, but in this climate, it also performs well thermally,” says Rohan. In addition to robustness and performance, he has achieved better quality spaces in terms of light and air flow, and a three-bedroom, two-bathroom home on a modest 135-square metre footprint, leaving his client’s scope to move, physically and financially, in the future.

This article is part two of a three-piece series on making the most of small spaces. Read part one, which explores Brad Swartz’s work on small homes, and part two, which takes a look at an innovative solution by Claire Scorpo.