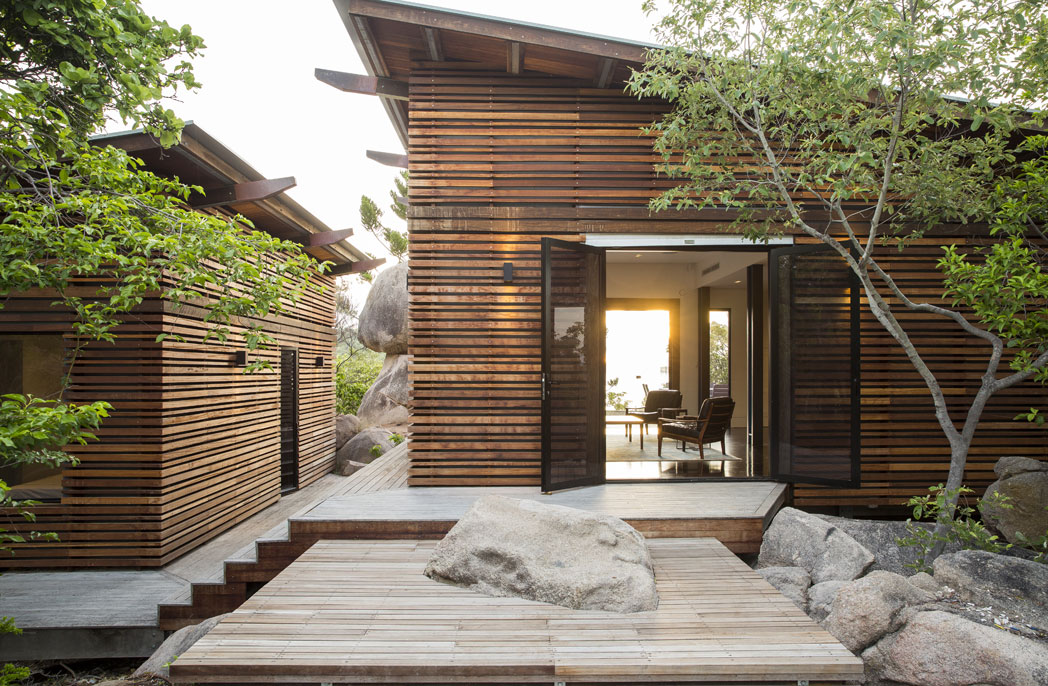 Across Australia, architects are finding that a response to place and the environment forms the foundation of ideas that will remain rock solid.

It’s a 20-minute ferry trip from Townsville (population 200,000) to Magnetic Island, permanent population around 2000. Approximately half of this mountainous island is protected national park — a rare habitat of granite boulders, hoop pines and eucalyptus woodlands, fringed by coral in the Great Barrier Reef Marine Park.

Zammi Rohan, principal of 9point9 Architects, has designed a number of houses here. His latest is The Pavilions, recently commended at the 2016 North Queensland Architecture Awards. He sees the island – just eight kilometres off the mainland – as both a satellite community of Townsville and a remote tropical paradise. But the short water crossing brings unique challenges to architecture.

“There are logistic limitations in terms of material sizes that can be brought to the island by boat, which in turn dictates the sort of materials you can use,” says Rohan. “There’s also a limited supply of resident trades; using them can save on costs, as opposed to ferrying people daily to work. So your strategies to simplify construction are important.”

The Pavilions is high up on Nobby Headland, an environmentally-sensitive development of 17 large residential lots, where small building envelopes ensure minimal intrusion on setting and sight lines. Views from here radiate across the Coral Sea to Cape Cleveland and the city of Townsville.

Rohan’s clients purchased the site with an abandoned, partially-built frame. He re-planned its layout, repaired and completed the steel skeleton in among the granite boulders. Steel columns, bearers and roof beams were prefabricated in Townsville, and ferried over for assembly. “The advantage of prefabrication is that allows us to work with the terrain. So the frame fits around or is bolted onto the boulders. Of course, you need a geotechnical engineer’s advice on where to put those foundations. The other advantage is that a roof can go up very quickly, which provides shelter and shade. That’s important because it’s very hot most of the year, and very wet in the rainy season [November–March].”

In the larger of two pavilions are the living area, kitchen, library, study, bathroom and guest room. The smaller contains three bedrooms, a bathroom and master suite. The priority is the outdoors, with 89 metres of outdoor decking to a relatively- modest interior of 149 square metres.

Both pavilions are clad in fibre-cement sheeting, then cloaked in hardwood timber battening, achieving twin goals of shading the walls from tropical heat, and softening the building, so it ‘merges’ into the forest as the timbers turn silver over time.

Rohan’s clients live in Hong Kong: one is French, the other is from Townsville. The interiors are a collaboration with a Parisian designer, so the furnishings, fabrics, art and timbers of this retreat are a mix of Australian, Asian, and European influences. Rohan himself is something of a hybrid. An Australian Malaysian from Tasmania, he moved to Townsville for his apprenticeship with Troppo Architects, where he worked for seven years before starting 9point9.

“What I really learnt at Troppo was a response to climate and place; and rationalising and simplifying planning, materials and construction methodology, although my style has evolved since then,” he says. “Troppo are renowned for lightweight construction, whereas I am now exploring a variety of forms and heavier materials; like Laneway House [named 2016 Regional House of the Year by the AIA] where we used concrete blockwork and a full masonry slab.”

“It’s a small project but it’s helped raise awareness locally about design. Townsville is bigger than Darwin or Cairns, though it flies below the radar because it hasn’t been seen as a major tourist destination. There’s a lot of industry here (mining, port, defence, and two universities). I think as it matures, it’s becoming more urban and progressive in its outlook.”

Further south in New South Wales, overlooking Tacking Point Lighthouse and the Pacific, Phoenix House in Port Macquarie acts as both a bushfire shield and a lens on the landscape. Set on a steep promontory, the site is classified as a flame zone, the highest bushfire attack level. This profoundly influenced the architect’s approach to both form and materiality. The clients had wanted a house of timber and stone, but the bushfire regulations ruled out any external timber, and stone proved cost-prohibitive.

The tangential street frontage triggered a strategic response from architect Chris Jenkins. He designed a building of two principal wings as high up to the road as possible, exploiting height to capture ocean views over rainforest canopy. Then, materially, he used the north wing as a primary bushfire defence, wrapping it in the grey/green steel of the roof (Lysaght 305 Longline in Colorbond Woodland Grey).

“By effectively creating a fire shield with the northern wing, the bushfire attack level for the rest of the house could be downgraded to BAL 40, allowing us extensive use of fire-resistant windows to the east to access the views,” says Jenkins. Devoid of glazing, the north wing contains the top-floor master suite, with garage below. In the south wing are the children’s rooms at ground level, with kitchen, dining and main living areas above, and a small services area and wine cellar in the basement. While the steel of the roof wraps down the western façade towards the ocean, it hovers high above both wings, shading the balconies and interiors. Connecting the wings is a central staircase behind a glass curtain wall that displays to the street its battened balustrade screen of Victorian ash. “The timber screen softens the whole façade and it looks beautiful at night when it’s all lit up,” says Jenkins.

This crucial element is in part a reparation for having rearranged the brief to meet the fire codes. Jenkins’ non-combustible armoury of steel and honed concrete block (Adbri Designer Masonry in Ivory with river gravel) is unsympathetically blunt, but he richly lined the interior with Australian hardwoods — blackbutt for flooring, Victorian ash for joinery and custom- made furniture, adding occasional colour bursts to amplify their warmth. At the 2016 AIA NSW Country Division Awards, Jenkins, “a local — of 25 years” received the People’s Choice Award for Phoenix House, and a commendation for his nearby Town Beach Amenities project – a rejuvenated café and toilet block at the local surf life saving building – now serving the only decent beachside coffee in ‘Port’.

Southwest now, to the NSW Central Tablelands town of Mudgee, where architect Cameron Anderson augmented a mid-century log cabin on a small sheep property. In the fertile Cudgenong River valley, at the outer edge of the Sydney basin, Mudgee is home to around 10,000 people. During the 19th century gold rush, when prospectors flocked to the nearby towns of Hill End, Gulgong and Windeyer, its population peaked at nearly twice that. Today the legacy of those early boom years is written in the hundreds of heritage-listed buildings in Mudgee – domestic and agricultural, as well as civic institutions like the Post Office, Railway Station, Town Hall and St Mary’s. Eventually gold was replaced by coal, and the mining of marble, clay, shale and dolomite from beneath the rich soils. Above ground, it’s farming, fine wool and food tourism that feed the town.

‘It’s an interesting time for Mudgee,’ says Anderson. ‘The mines are getting old, and with more talk of renewables, people are looking beyond mining. A renewed interest in food associated with wine is driving innovation in areas like short-stay tourism. As an example, my wife’s family hosts the annual Sculptures in the Garden festival (more on page 43) at their property, Rosby Wines. It’s one the things we moved here to help with, and its grown steadily to attract around 3000 people this year.’

His brief for the Queens Pinch Road property was for a house extension with both separate bedrooms and gathering spaces for a family of nine. Anderson adapted to the tight budget by reorganising the little cabin for extra bedrooms, which meant that the new wing could be reduced in scale, and funds diverted to building intelligence (like hydronic underfloor heating and solar hot water).

Anderson likes to underscore thresholds between old and new buildings, rather than conceal them, and he used both form and finish to do this. While the log cabin ignores the site aspect and contours, and runs east-west, his addition runs north-south for better sun and rolling views down the property. The two are connected by a new shallow entryway, which traps a deep central courtyard behind.

In layering the steel cladding profiles of the addition, Anderson alludes to the rural vernacular of a structure expanding over time. With recycled materials, he expressively links the new wing to the landscape. All the brick paving is all recycled. Timber from an old bridge was found on the site and used for external columns. Two old barn doors were remade into a heavy sliding shade screen hung on crude rollers from an old piece of machinery.

“I’m increasingly interested in repurposing materials. It’s relevant to more remote projects where transport and labour can be significant costs. But it’s also a way of using materials that tell a story – things found on site or collected by the client. That frugality might seem second nature to farm life – born more from necessity than nostalgia, but I think it’s also about preserving a personal connection. And it’s great environmentally when you can give things a second life.”