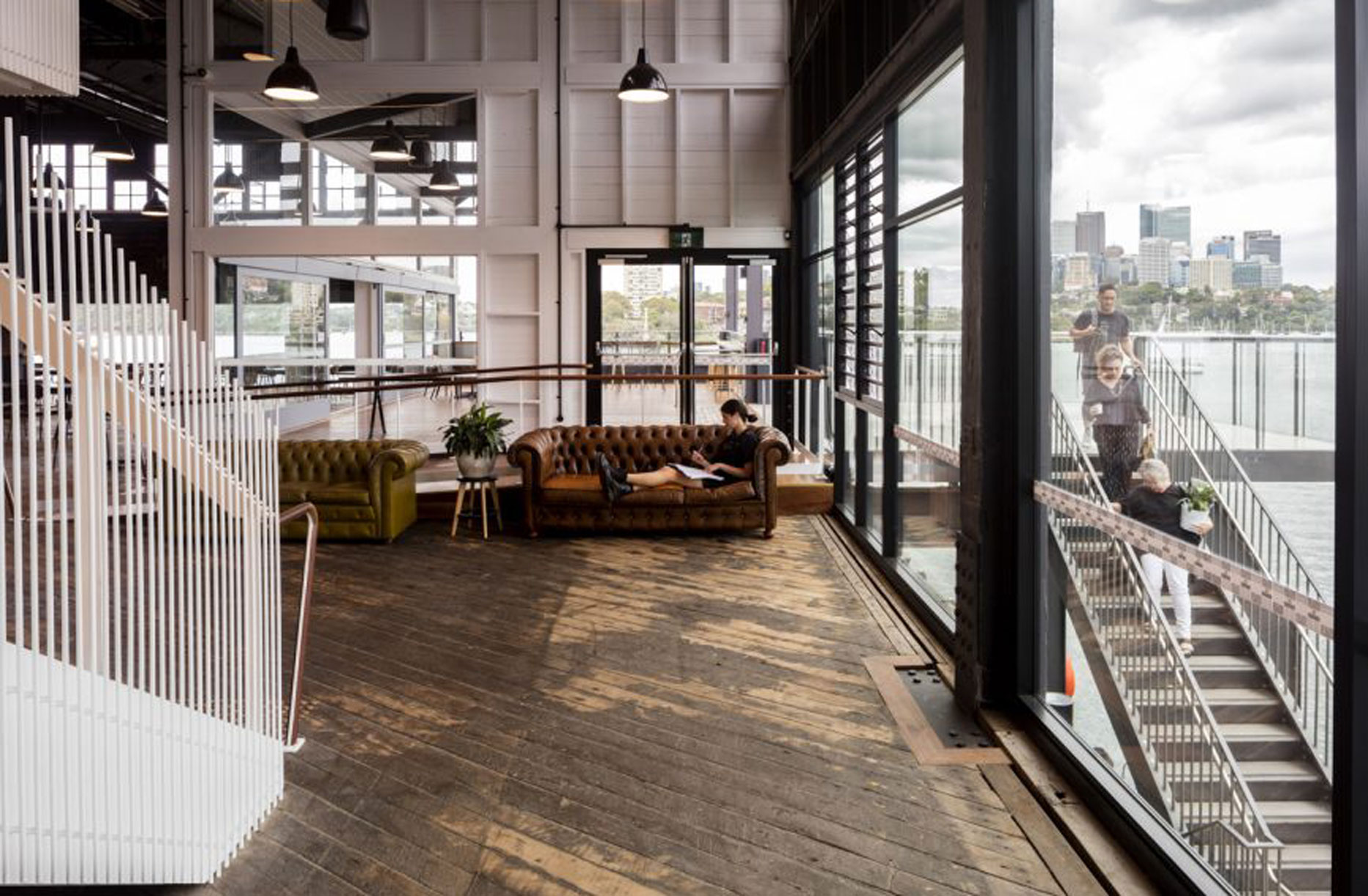 Hassell has preserved the Heritage qualities of the Sydney Theatre Company’s Walsh Bay wharf home in its $60 million redevelopment unveiled earlier this year.

The timber-lined interiors of the newly renovated The Wharf on the Sydney Harbour highlight the 100-year-old history of the Heritage-listed warehouse, which was first transformed from a wool store into a theatre in 1984 by architect Vivian Fraser in association with the NSW Government Architect J. Thomson.

“It was time to re-invent theatre spaces to provide a broader range of experiences for artists and audiences, while staying true to the building’s 100-year-old heritage and much-loved character,” explains Hassell.

The multidisciplinary studio used salvaged wharf timbers for the timber stair treads and bar benchtop, matching them with the raw unfinished Heritage timber that already lined the ceiling and floor.

The white volumes of Fraser’s 1980s restoration were captured in the painted plasterboard and glossy white timber panels used throughout.

Balustrades and handrails were made of white Stainform steel rods, while the original front of house pendant lighting was restored and updated with LED lights.

The restoration, which was dubbed the Wharf Renewal Project, aimed to combine an “all-under-one-roof” philosophy with increased flexibility, allowing everyone from playwrights and set designers to artists, actors and producers to work together in the same building.

Hassell increased the wharf’s interior space and improved circulation by removing the fire tunnel that ran down the centre, adding safe exits to the concrete apron surrounding the building instead.

A new back of house corridor was added for greater operational efficiency when moving sets from workshops into rehearsal and theatre areas.

The practice also raised the ceiling above the theatres and workshop to allow sets to be built in full height for the first time, and improved the “behind-the-scenes experience” for artists with state-of-the-art dressing rooms, larger and more comfortable rehearsal rooms, break out spaces, vocal coaching rooms and a recording booth.

In the two main theatre spaces, flexibility and accessibility were key requirements.

Wharf 1’s capacity was increased to between 350-420 with flexible and custom-designed seating configurations, while Wharf 2 gained a capacity of 160 with retractable seating that allows it to be converted to a rehearsal or multipurpose room in under an hour.

Assistive listening systems were upgraded and extended to include rehearsal rooms, while a new Meyer Sound Spacemap Go system was installed in Wharf 1 – the first of its kind to be featured in a theatre in the southern hemisphere.

Hassell also included the option to combine both theatres into a larger space by inserting retractable concertina Skyfold doors that disappear into the ceiling.

Finally, the spaces were painted with Blitz Total Sealer – a paint product developed in-house when the pandemic limited imports.

Two new lifts and the addition of two balcony extensions off The Theatre Bar at the End of The Wharf and Atrium also provide direct access to the venue from the harbourside.

The Theatre Bar itself received an upgrade with improved kitchen facilities and an updated dining room.

“The Wharf is a wonderfully rich historic building with decades of audience and company history (plus a few ghosts!),” concludes CharcoalBlue senior partner and co-founder Gavin Green.

“This innovative new design looks to the future while being informed by the history that is at the heart of this building and the stories its occupants share with the audiences.”

Earlier this year, Hassell teamed up with OMA to tackle another cultural centre, embracing Heritage and history once more for the WA Museum Boola Bardip in Perth.