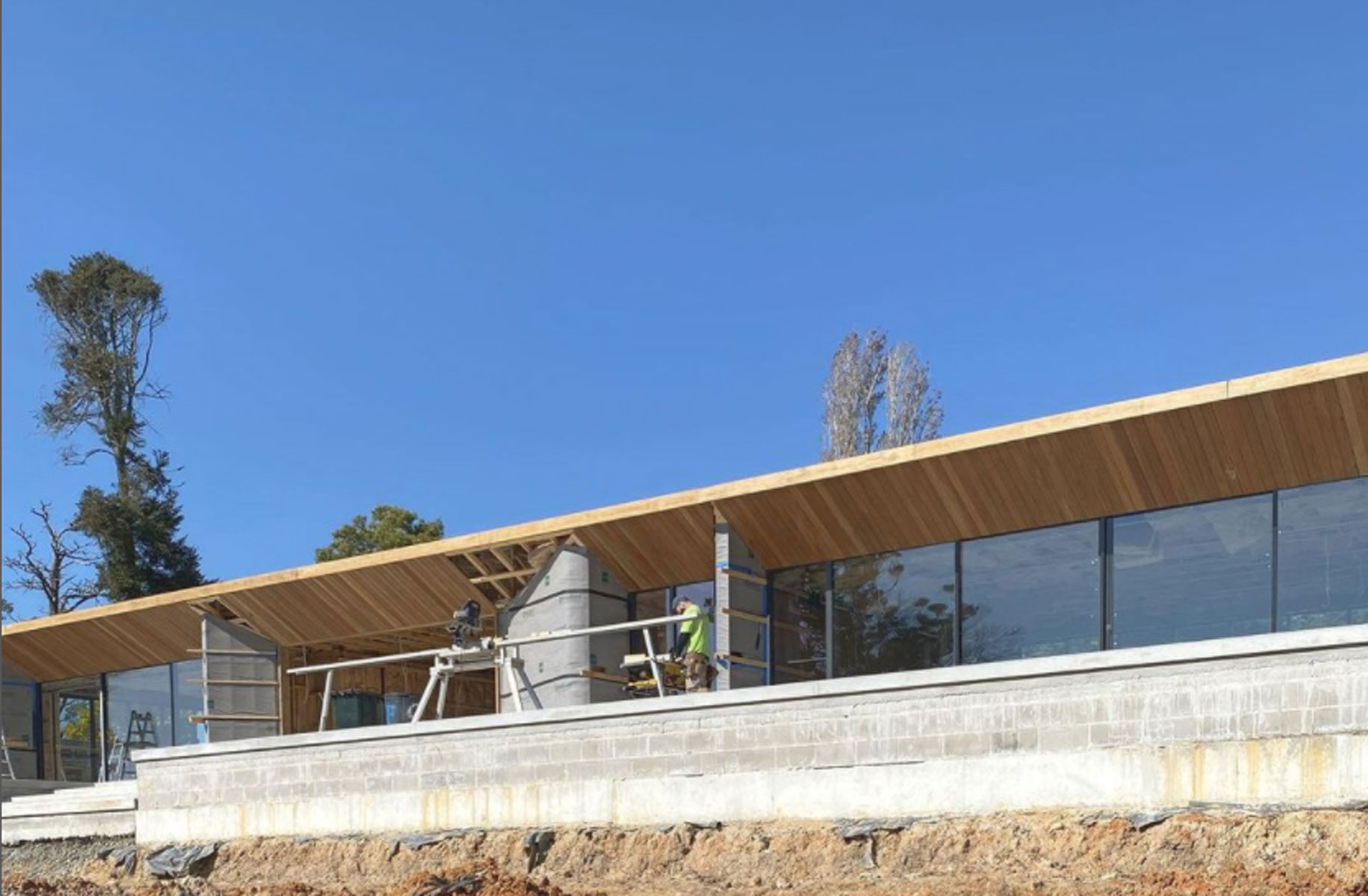 Led by Moloney Architects, Remnant House is a building rising from the ashes, replacing a rural homestead lost to bushfire in 2013.

The firm, helmed by duo Mick and Jules Moloney, is no stranger to regional builds, but Mick Moloney tells ADR rebuilding this home has been an “emotional journey” for both client and architect.

“It just really created this hole in the ground and we’ve never had to deal with anything quite that violent before in terms of the level of destruction.”

One challenge of building atop the existing base was reorienting the homestead about 15 degrees to honour the major view overlooking rolling hills and an ornamental lake.

The result of this rotation is two grids, one aligned with the original building and one with the new, introducing a splay element acknowledged in the use of acute “blade wall” angled forms throughout the building.

“It kind of works from that idea of having these framing elements on a giant architectural scale,” says Moloney.

“So composing a series of picture frames that work to frame the landscape view.”

Remnant House will be the third homestead iteration on the property.

The original colonial building, built in the 1800s, burned down in 1918 and was rebuilt in an Art Deco style in 1920. An ember attack reduced the property to ruins again in 2013.

Moloney says it was important to their clients and the design team to acknowledge the site’s history with a central sunken garden space set aside to display “little remnants” of the past.

“Grates and steel that the client has lovingly preserved, held onto, will almost create this little outdoor museum of historical artefacts.”

As for the home itself, practicality, texture and balance intersect at the material palette, which comprises naturally fire-resistant materials.

Externally, the home is clad with vertical shiplapped natural blackbutt with pavilions connected by limestone panels and limestone landscape walls.

Concrete also features heavily, with concrete flooring and edging on the terrace. Internally, walls are a polished plaster with concrete detailing throughout.

“We often talked to clients about the parts of the building that we wanted to read as light and a bit more ephemeral – those would be made of lightweight materials,” says Moloney.

“On the flip side, we also selected materials that would give the building a sense of solidity and permanence, creating this sort of contrast.”

In speaking about Remnant House, Moloney says there has been a cultural shift of late that stems from a more nuanced understanding of how bushfires and, in particular, ember attacks work.

“That understanding of how that works has progressed a lot now so that we can use timber in bushfire prone areas.

“We can use a more contemporary palette of materials and, provided we get the detailing right, architecturally, we can still have that material flexibility.”

“It’s immensely satisfying, when you’re out there looking at the project, you can trace it all back to some sketches you did in a sketchbook on a train, and that’s where it’s very satisfying.

“It reminds you of why you chose this profession.”

Remnant House is set to be completed in the coming months.

Moloney Architects is an architecture practice based in Melbourne and Ballarat, headed by Jules and Mick Moloney.