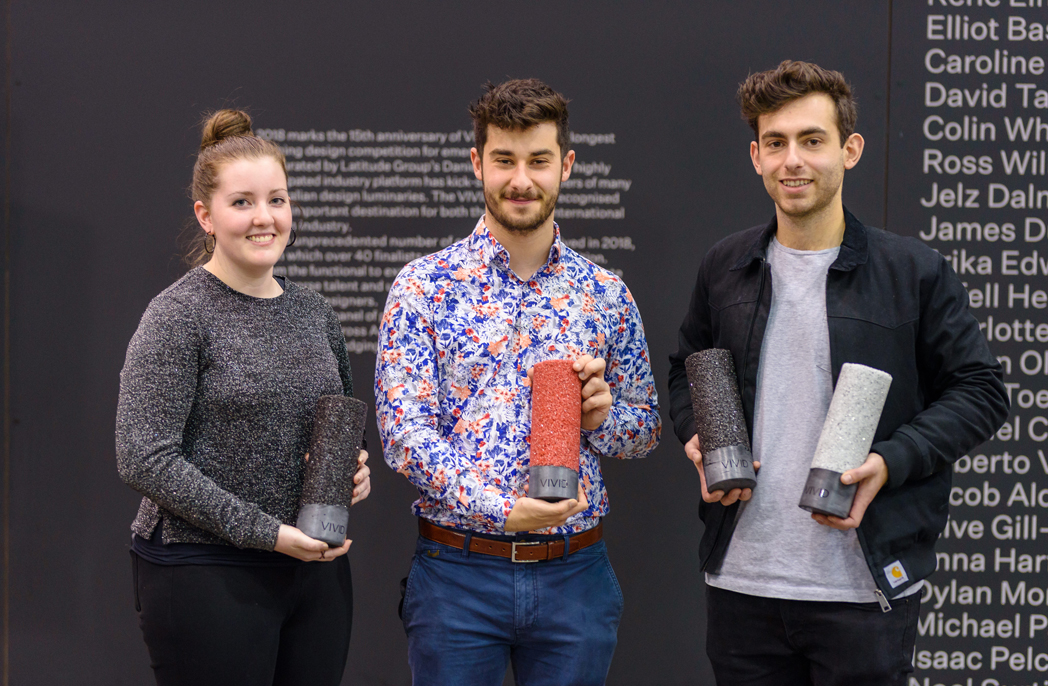 The winners of VIVID 2018 were announced at a special awards ceremony last week at the Decor + Design exhibition in Melbourne.

ADR caught up with some of the winners to talk about design processes, inspiration and what’s next for these budding young designers. 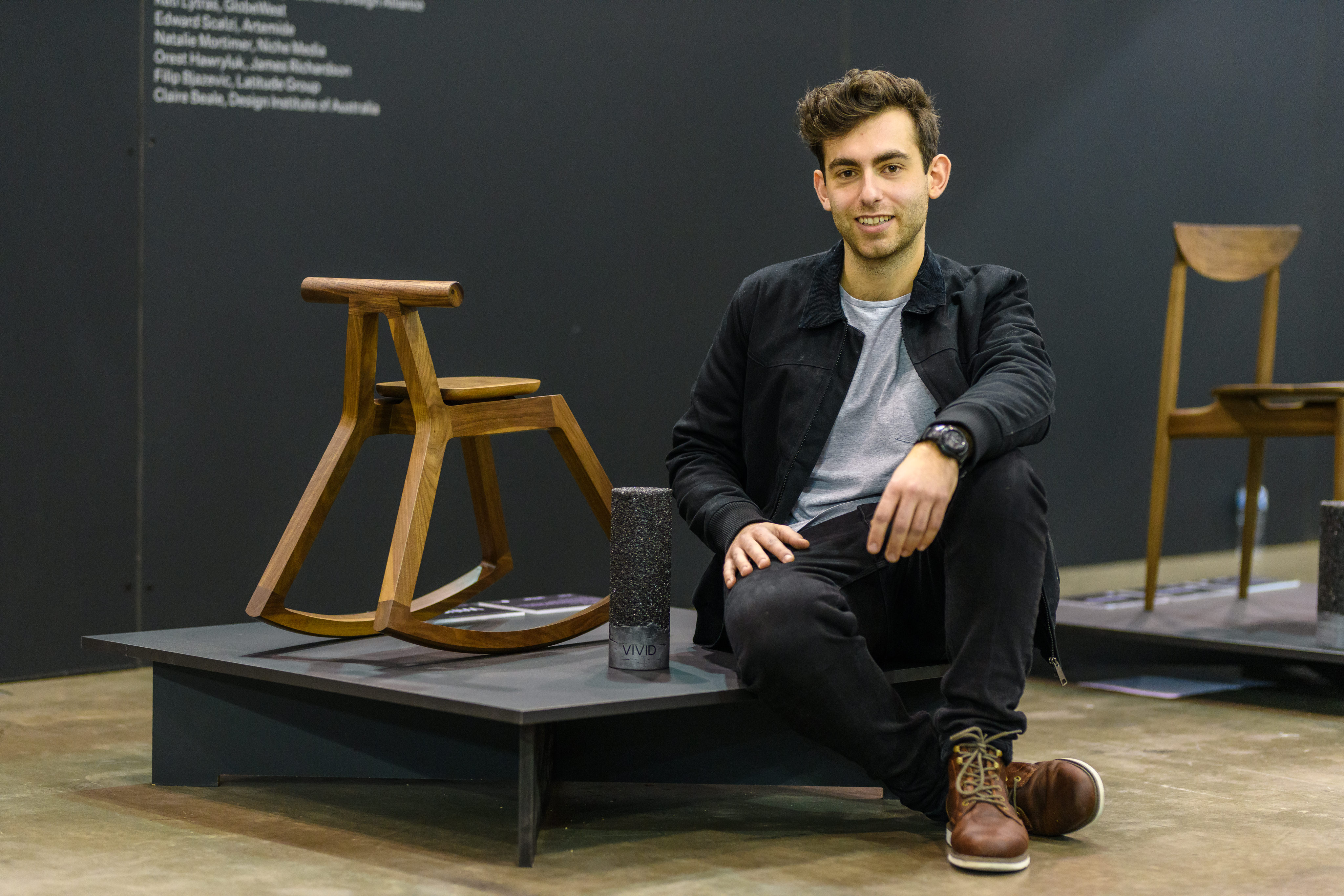 ADR: Talk us through the thinking behind the design of the James Chair and the process itself.

The design was an interesting process and I worked on it for a long time. A lot of my work is very process driven so I like to combine a bit of digital fabrication with handwork and craftsmanship.

Ultimately I wanted to create a unique piece and I think furniture is a space where there are a lot of chairs and dining chairs especially. Really what I wanted to focus on are the points that you interact with, so the carved back is really nice: when you are pulling out a chair and pushing it in you’ve got that nice feel to it.

Having lived with mid-century pieces that tended to be flimsy and come apart a little bit I wanted to focus on making a robust chair that was really light to look at, but still strong and that something that I try to do with all my pieces is to keep them strong, but light and classic while still pushing the design.

The first chair I built actually wasn’t very strong at all, some of the joinery and the way I had assembled it led to a little bit of leaning and racking. A lot of chairs tend to have undercarriage supports and other features to mitigate that, and I ended up changing the configuration for the second version, which was the one on show at Vivid.

I changed the way the back legs interact, putting them on a bit of an angle meaning that when you are sitting on it comfortably it won’t tip back or rack left and right. So I spent a lot of time in the detail work and measurement and material selection.

Another challenge was the backrest, it’s quite deep and so I had to figure out ways to make the material go a long way. Whenever you are carving there is a lot of waste so the way I try to avoid that is to cut out the shape and stick it on the back and you end up with a nice curved piece.

Talk us through the inspiration behind the design of the Arion Rocker?

A friend came to me and said they knew someone who was having a child and wanted to give them a rocking horse. I’d never thought of doing a rocking horse before, but he wanted something clean and so I came up with a few designs, which actually took a really long time.

I thought it was going to be simple, but I went through a lot of prototypes to make sure I had things like the seat placement right: at one point it was too far back and the whole thing would tip over. When people have kids you end up with a lot of stuff around your living spaces and I didn’t want this to be one of those, I wanted it to feel like a piece of furniture and also be something that they can keep. It’s one of those pieces where, yes it’s a toy, but it’s ultimately something you can keep.

As an emerging designer, what is the hardest thing about getting exposure or progressing your career?

For me, I am a little bit introverted because I like to spend a lot of time designing and making things so having to shift gear into thinking ‘OK I need to put myself and my designs out there’. Social media has broadened that hugely because you can put your stuff out and if people like it they can find it.

You have to think on your toes too, whatever situation you are in and what you have access to such as tools, machinery and design time. A lot of new designers are working other jobs as well and I think a lot of emerging designers are in the same position. As well as designing and making furniture I also teach design at university, it was a position I was given after I graduated, which was great, and I find that really rewarding as well so it’s about finding enough time to design and make your own pieces.

What’s next for you?

I’ve just finished up my website, and I’d like to try and turn design into a full-time career and hopefully work with people who can help me make that happen. 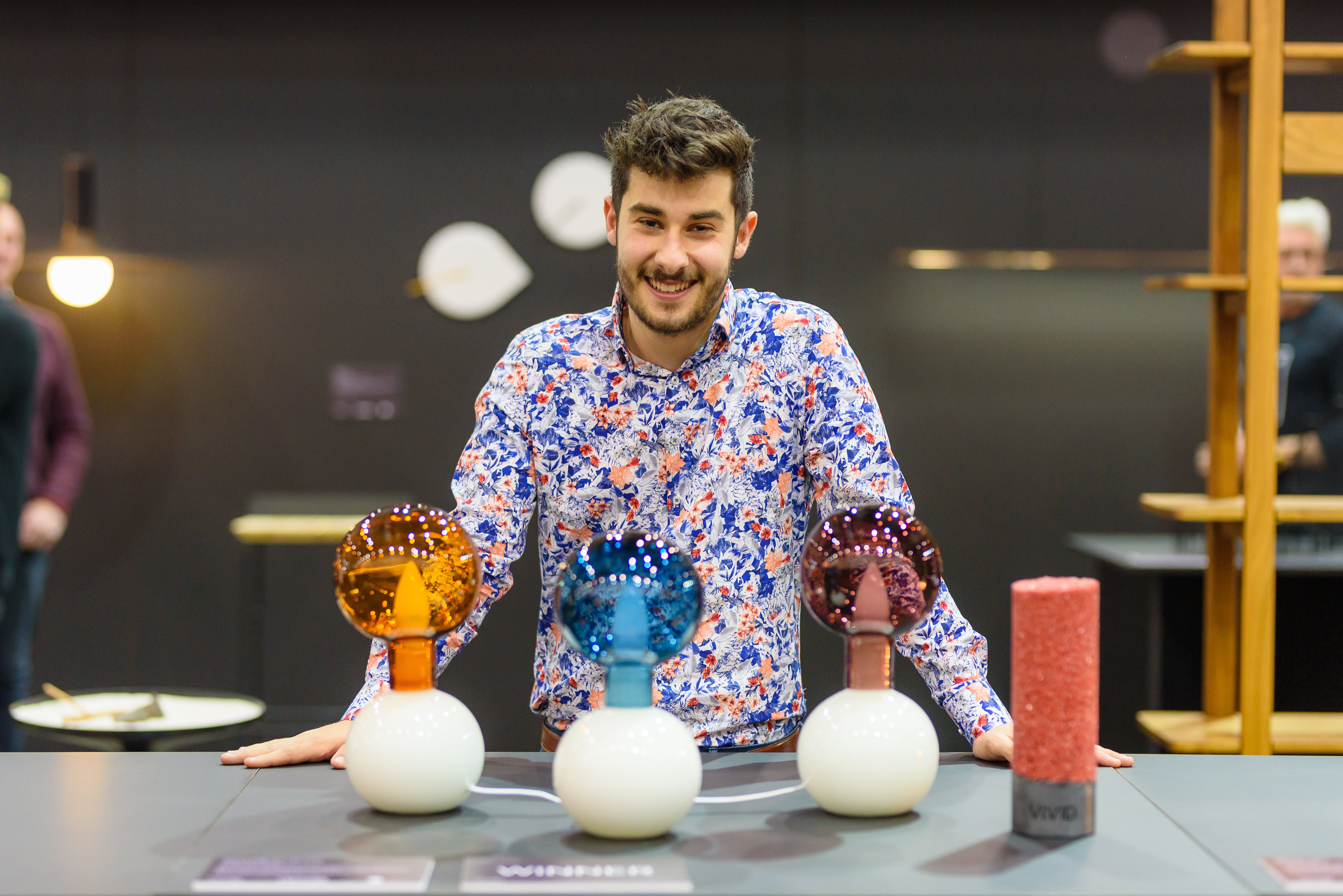 ADR: Talk us through the inspiration for the design.

I, unlike a lot of people in the show, have come from a visual arts background where I specialised in glass blowing, which is what my degree covered.

Lighting was something I hadn’t done before and I’d seen a lot of lighting that I had loved, both glass and otherwise, and I figured that it fit with my general aesthetic of minimal, fairly simple shapes. I do a lot of spheres and cones and I felt like that was something that I could convey into lighting.

There’s already a lot of glass lighting so I wanted to try something different, which I suppose is why I went for a desk lamp over pendant lighting, which is very popular in all mediums but definitely glass at the moment.

For the Kilo lamps, one of the most challenging things about them was that I’d never done anything in the way of lighting before, and I really had to lean on the helpful sources of knowledge that I had in the Adelaide glass scene and industrial design scene. The Jam Factory is quite a big destination over there for local Australian design and there is a lot of knowledge there and people are generally pretty free and giving when it comes to sharing information. But a lot of my process was dictated by what I knew glass was possible of and how I knew to push it.

As an emerging designer, what the biggest challenge or hurdle for you?

I’ve found that short of me going back to university to study industrial design the only real way that I can progress as a designer rather than say a glass artist is either with continued experience in experimenting with industrial design or a mentorship where I’m able to work with or for somebody that reflects the design I like or the position I’d like to achieve.

How does it feel to have won a Vivid award?

Pretty good! I genuinely came in to this just so happy that I could be here. Melbourne has always been a bit of a design destination for me, as an Adelaide boy, so coming here for my first design conference I was just happy to be here and the idea that my work was liked enough to win an award amongst all that amazing design work. 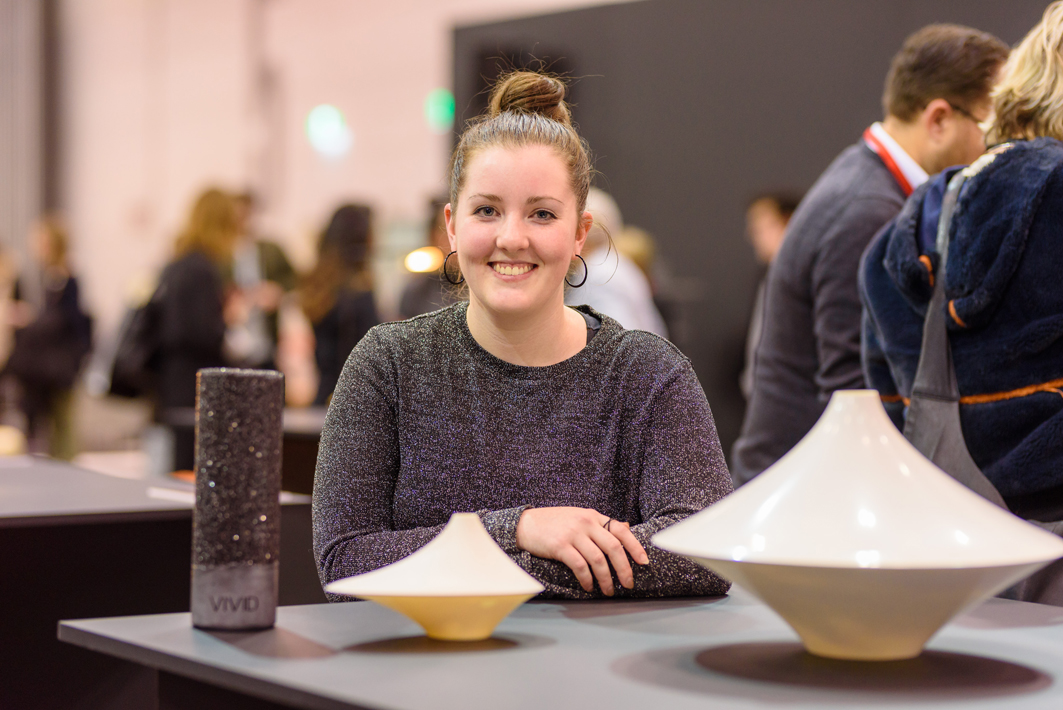 ADR: Talk us through the inspiration for the design?

So the VaryVases were produced when I was at university. I’m actually an architecture graduate so product is not my field and it’s something I’m still learning about.

I actually started without a particular product that I wanted to design. I wasn’t thinking I was going to do a lighting piece or a vase, I really started from wanting to create a piece that was mass customisable: so that means you can make a product that has the efficiencies of mass production but you are giving leeway to have it customised by a person who will have the product in the end.

To create the vases I made a mould out of latex and MDF and then that mould gets put on to a rotational moulder, which is something that spins in two directions quite quickly.

Rotational moulding can be challenging because you have to make sure that the ratio at which they are spinning is balanced. Resin itself is a challenge as it can be tricky getting the temperature right.

How does it feel to be a Vivid winner?

I was really not prepared for it! It feels good. I said to my parents before I arrived that I already feel like a winner just by being here and getting to this round, so it’s really nice.

What’s next for you?

I will go back to my architecture job on Monday, but I will definitely like to keep making on the side. I also do a bit of jewellery design, which is 3D printed and that’s at a small scale I can manage.