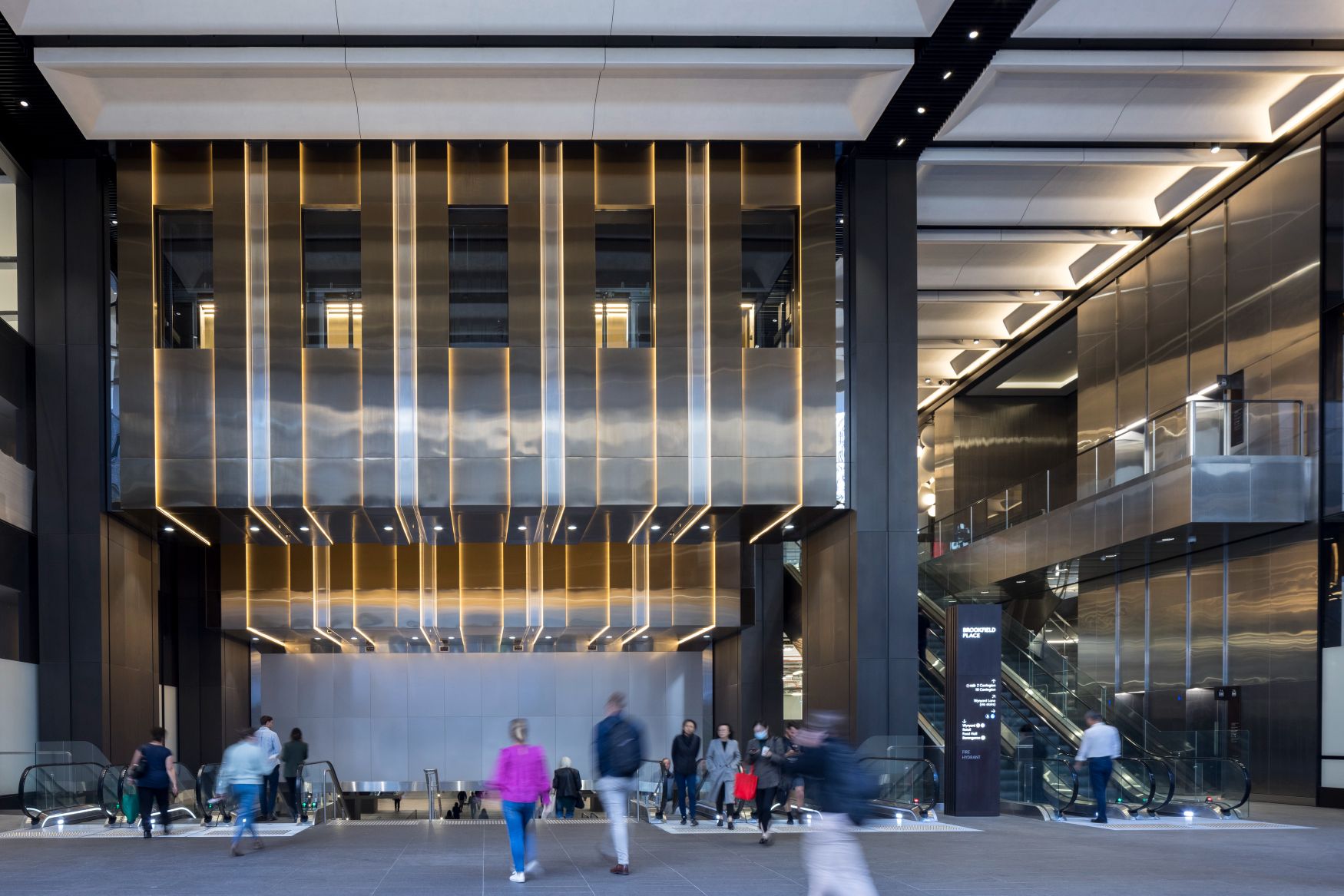 Sydney’s busiest transit hub, Wynyard Station, has been transformed into a “sweeping new front door for commuters” as the revitalisation project led by Make Architects with Architectus as executive architect comes to a close.

The newly unveiled entrance on George Street is part of a much wider civic design project dubbed Wynyard Place.

With practical completion achieved in April 2021, the $2 billion project unites four separate sites – the former Menzies Hotel and Thakral House and the retained Shell House and Beneficial House, assembling them into one reinvigorated block with the reconfigured transit hall of Wynyard Station at its heart.

“Previously, passengers [at Wynyard Station] were funnelled down to the concourse along passageways that ran either side of a central core, which felt dark and unwelcoming,” explains Make Architects and Architectus.

“Our contemporary civic design reimagines the ground plane, making public space the focus, with a strong understanding of how people move around the city.”

Architects began by raising and suspending the central core of the site, using mega-columns in the boundary walls to support the building’s shear load, much like the “flying buttresses of a Gothic cathedral”.

This provided space for a new triple-height “Urban Hall” filled with daylight, transforming the arrival experience for visitors and commuters.

The core itself has been clad in almond gold stainless steel with vertical glazing, designed to “stand out” against the Glass Fibre Reinforced Cement-coffered ceiling and provide views into the commercial lift lobby from below.

Channeling what the architectural team describes as the “Melbourne model of life in the city after dark”, Wynyard Lane, which was originally a thoroughfare to the car park, has been “opened up for active use”, with cafes and bars.

Retail has been added to flank the Wynyard Station entrance with escalators leading down to a lower concourse food hall and transport interchange.

“This space now acts as a sweeping new front door for Sydney’s commuters, in a scale commensurate with Wynyard Station’s status as the CBD’s busiest transit hub,” adds Make Architects and Architectus.

“A grand passage connects George Street and Carrington Street with the nearby Wynyard Park for the first time, creating a dynamic, people-centric urban space.”

Above Wynyard Station, the new 27-storey Brookefield Place is “sculpted to respond to the rhythm of its city block”.

Stepping the blocks to reduce the overall volume, preserves sunlight and optimises sightlines, architects designed this new tower to merge with the adjacent listed Shell House, which was also restored.

Built in 1938, Shell House was the former headquarters of the Shell Corporation before becoming part of the Menzies Hotel.

“Working with heritage specialists to carefully restore and integrate the building into Brookfield Place, our team ensured the design could be restored from the city scale down to the detail,” explains Make Architects and Architectus.

Inside floorplates of up to 3,200 square-metres– among the largest in Sydney – span across both buildings. Brookfield Properties Asia Pacific and the National Bank of Australia are anchor tenants.

The last piece of Wynyard Place was the restoration of nearby Beneficial House on George Street.

“Our aim was to restore it as close to its original design as possible,” says the architectural team of the project.

“Externally, we retained and restored the beautiful brick facade and timber windows, while internally we stripped back years of additions and interventions, refurbishing and revealing original timber flooring, panelling and windows.”

Founded in 2004 by Ken Shuttleworth, Make Architects has studios in London, Hong Kong and Sydney providing architecture, interior and urban design services from concept to completion.