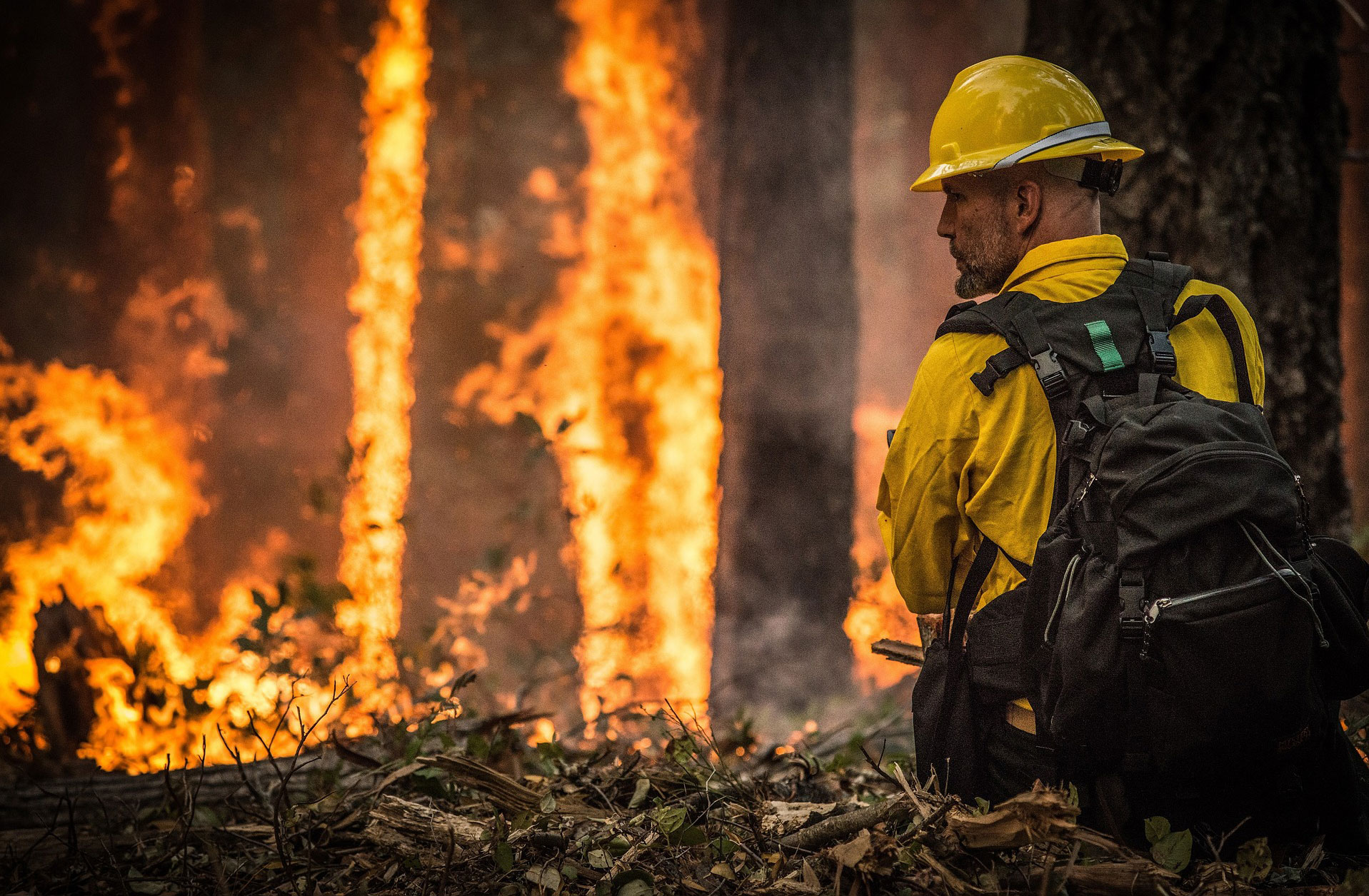 Design for a changing climate – fire and community resilience

Communities in Australia and California share connected experiences as they face climate-related threats, especially fire. But how much have we really learned about designing places that will serve us well during times of disaster?

Richard Mullane: As an Australian living in California, it’s heartbreaking to watch the devastating bushfires from afar. I moved to San Francisco in 2017. I remember standing in Twin Peaks watching the haze of the Tubbs Fire as it spread across the North Bay cities. In the years I’ve lived in the US, I’ve seen three fire seasons torment communities across Northern and Southern California.

I’ve spent my entire career designing places for communities, in Australia, China and now the US. Neighbourhoods, city precincts, and public spaces where communities can thrive. Climate disaster – be it storm, flood, earthquake or fire – is fast becoming the real test of how well we design such places.

Greg lives in Los Angeles and his experience with wildfire is both professional and personal. We share frustration living under federal governments that still dispute climate change as the cause of more frequent and voracious fires. And we’re interested in how planners and designers can support communities to anticipate, adapt to and respond to disasters.

Greg Kochanowski: Uncannily, the fires in Greater Sydney became catastrophic in the second week of November last year – the same week in 2018 that saw the deadliest fires in Californian history – Camp Fire in Paradise and the Woolsey Fire in Los Angeles. It felt like I experienced a bit of PTSD witnessing the loss of property, human life and unimaginable devastation of wildlife.

The scale of destruction across Eastern Australia is almost incomprehensible, and the fires aren’t yet contained. Scientists estimate a billion animals have perished in the fires – a mass extinction probably not seen since the atomic bomb dropped in Nagasaki. It makes very present the interconnectedness of the human species to the rest of the world, and the way we are causing, ultimately, our own extinction.

GK: The current situation in Australia, as I see it, is the future of California made present. We share so many physical and environmental attributes – climate, vegetation, ecologies and development patterns. We have the most advanced research on fire science and suppression technologies and practices in the world. But what’s become obvious is that those practices of suppression, borne over decades, haven’t served us well. Fires in Australia and the Western United States have existed for millennia. But expanded development patterns of human occupation exacerbate natural fire ecologies.

We speak a lot about resiliency, so we should try to define that term a bit more. ​‘Resilient’ does not equal ​‘resistant’. Resilience is the capacity for an environment or people to recover from disaster. In this way, disasters are not prevented, but managed. To put it another way – to keep living in these ecologies, we must shift our understanding of what it means to live with them.

To this point, the global design community can support disaster response in more ways than building and rebuilding. Education is important – for example, design guidelines that mitigate disaster impacts, including land management and stewardship, can be implemented both before and after a catastrophic event. As designers (planners, architects, landscape architects) we can provide models of living and ways of building (organizational, technological or typological) to help the public envision new ways of living with our environments, instead of in opposition to them.

Planning public places for disaster use

RM: Working on resilience planning here in San Francisco, we looked at the ways communities use public spaces during climate disasters. From these scenarios, we can learn about their needs and better design places for an uncertain future.

The Sonoma County Fairgrounds became an organising hub and temporary accommodation during the 2017 fires, and a place of refuge again in 2019. So did San Francisco’s parks during the 1906 earthquake and fire, and countless Australian rural footy grounds in recent months.

When fire blocked the road network into Mallacoota, Victoria, last month, ships and boats evacuated people from the beach. Similarly, in San Francisco, ferries were part of the emergency response during the 1989 earthquake. This led to increased funding and expansion of the Bay Area’s ferry networks. We can and should design better places and systems that function for daily as well as disaster use.

GK: Zuma Beach also became a place of refuge in the Woolsey Fire. It was an evacuation point for people and animals (exotic, farm, and domestic) and a staging ground for firefighters and assistance organizations.

Although able to function, the beach obviously wasn’t designed in anticipation of such an event. When envisioning new open spaces in the wildland-urban interface (WUI), we should understand them as part of a set of programmatic potentials that include disaster and emergency response.

GK: Planning has a significant role here. Climate change doesn’t prescribe to traditional planning boundaries, so requires new thinking about what constitutes a site. Planning needs a much broader context, bringing in extended understanding of infrastructure, habitat and ecology.

We must also re-think infrastructure. The most prominent form of infrastructure affecting California’s WUI is electricity. We need to replan our power infrastructure, because Los Angeles brings power from huge distances outside the city, through areas highly susceptible to fire.

I live in a cooperative community in Cornell, north of Malibu, in the middle of the Santa Monica Mountains and the WUI. The 2018 Woolsey Fire destroyed our home. Our community has 215 homes, with 110 destroyed by the fire, along with most of our infrastructure. We’re a private organization with private streets, so the cost of rebuilding falls solely on us.

The site was originally a health spa destination in the 1920s that changed to residential in the 1950s. Climate change wasn’t a term then, so it wasn’t designed with resiliency in mind. Although fires had come through in prior years, our community wasn’t prepared in the manner it could or should have been.

Our place fronts Mulholland Highway, a narrow, one-lane road through mountainous terrain that has few places to turn around. Luckily, the community has multiple points of egress to other major corridors. But the Santa Monica Mountains has many communities at the end of dead-end roads, or with single-point of access. Even in LA, the Hollywood Hills has this problem.

This creates a disastrous condition, trapping people during a fire. So, while tactics like defensible space and home hardening are essential, we must evaluate and modify larger infrastructure patterns.

GK: In the days following the Woolsey Fire, my wife and I lived on Twitter. Technology and social media enable communities to communicate in ways unheard of twenty years ago. In times of crisis, the most important commodity is information.

The importance of information exchange is acknowledged in discussions on disaster relief, as well as political protests and the like. The design community is slow to leverage this, but designers can bring our skillsets to the table because design for the built environment is about forming relationships.

Robert Putnam researched declining social capital in the US since the 1950s. He identifies a phenomenon that he calls ​‘bowling alone’, referencing the reduced number of social bowling leagues.

This is why some of our rural Australian communities fair better than urban communities would facing a disaster. They’ve maintained strong social capital, enabling them to self-organize.

GK: Daniel Aldrich argues that social capital contributes more to a community’s reconstruction and rate of recovery than economic resources, government assistance or degree of damage.

In Building Resilience: Social Capital in Post-Disaster Recovery, he says the term ​‘disaster’ in sociological contexts speaks toward the failure of social systems. He finds true resiliency in localized social networks that enable communities to recover.

After Hurricane Katrina, for example, the Mary Queen of Vietnam community recovered within two years, rebuilding most of its homes and recovering a majority of shops. The community’s income was lower than state and national averages, and it received little governmental assistance after the flood.

In contrast, the Lower Ninth Ward, with poverty rates equal to that of Mary Queen of Vietnam, had only thirty percent of its residents return and is still yet to recover.

RM: What does this phenomena mean for the resilient planning and design of communities? Designers have a new and urgent responsibility to embed resilience within all our projects. But we can’t only focus on complex disaster response plans that sit on a shelf in city planning departments.

Recent accounts from the New South Wales South Coast demonstrate what communities need to self-organize and survive a disaster. ​“This is what community feels like”, wrote former Australian Senator Scott Ludlam, describing an evacuation center after fleeing the bushfires.

We must defend the critical elements of community that are too often value-engineered out of new housing developments and underinvested in existing towns. Parks, public libraries, recreation centres and main streets are the spaces that connect us to our neighbours, before we’re called on to help each other in a disaster. We must judge design by the social capital it builds in communities, and which can eventually save lives.

This piece originally ran on the Hassell website. It has been reproduced here with permission.