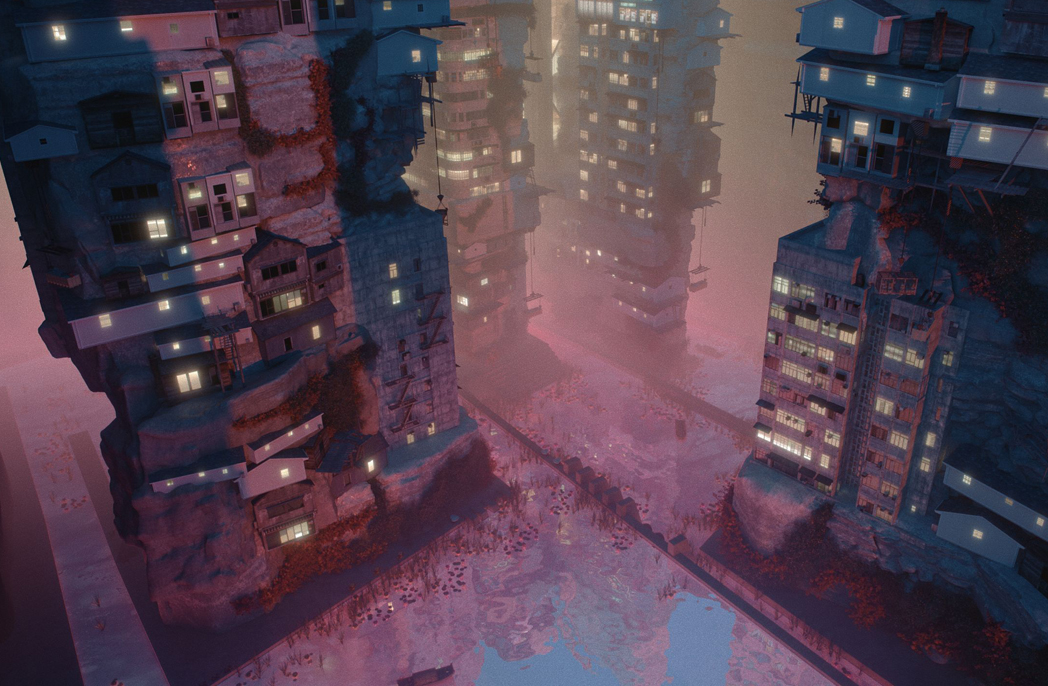 Speculative architect Liam Young may not have a magic bullet for climate change, but he’s proving it can be done in his provocative short film, Planet City.

“This isn’t another negative story about how we’re all going to die from climate change,” Liam Young says, as his Uber navigates traffic one summer evening in Los Angeles.

“Rather it’s trying to say that there are ways forward through collective action and a global consensus that doesn’t mean we’re going to live in a context of scarcity. It just means we’re going to live differently and that difference can also be beautiful and wondrous and fun.”

Young outlines his way forward in 15 evocatively rendered minutes for a short film entitled Planet City, which made its debut as part of the NGV Triennial held in Melbourne earlier this year.

The Australia-born speculative architect and director is the co-founder of Tomorrow’s Thoughts Today, an urban futures think tank that explores the local and global implications of new technologies.

He also heads Unknown Fields Division, a nomadic research studio that travels on expeditions to chronicle these emerging conditions as they occur on the ground – COVID-19 pandemic restrictions permitting.

“Planet City was designed to be both utopian and dystopian simultaneously, depending on who sees it,” beams Young from across the Pacific.

“Some people say they would love to live there. Others are scared off, asking, ‘Why aren’t there more trees? Why is it pink?’ It’s the last place they want to be. And so they see it as a cautionary tale, projecting it through their own lens, with their own biases and contractions.”

Teaming up with host of LA-based creatives, including costume designer Ane Crabtree, of The Handmaid’s Tale fame, Young offers up a glimpse into an alternative future where the entire population – all 10 billion of us – occupy 0.02 percent of the planetary surface in one hyper-dense, self-sufficient metropolis.

That 10 billion figure is not arbitrary. Nor is Young alone in presenting his alternative vision of a future planet Earth.

BIG ‘starchitect’ Bjarke Ingels ended 2020 by suggesting a solution to the climate problems in store for the world’s projected 2050 population.

Dubbed the Masterplanet concept, it involved scaling up existing infrastructure to cover the entire planet. Central to this thesis was the creation of a single power grid to supply every country with renewable energy, thereby solving the current problem of inconsistent supply.

It’s something of which Young is sceptical.

“A massive consensus is going to be needed in order to engage with problems we face at scale,” he says. “It’s collective action and it involves systemic change, not a singular magic bullet, technological solution or master energy grid that will solve the renewable energy system.

“It’s about a total rewiring of who we are and how we define ourselves and our interests.”

In Planet City, we live in 221,367 square kilometres of ‘residential mountains’, some of which rise up 165 storeys. Power comes from 49,445,671,570 solar panels, while 2357 algae farms filter pollution and provide supplementary food when we’re craving something other than the fresh fruits and vegetables grown in the vertical orchards and mega farms that occupy the space between our buildings.

In this closed-loop world, we generate no waste and navigate the streets on 4,311,543,982 bicycles. It sounds incredible. Impossible. Science fiction at its most adventurous, but Young is quick to point out that it’s none of the above.

“So many of the architects that are engaging with climate change come to it from a very solutionist perspective – here’s a problem and we could make a new building or a new material that’s going to solve that problem for us,” he says.

“But all the technology required to solve climate change, dig us out of the hole that we’ve created for ourselves, is already here. There’s no technology in Planet City that doesn’t already exist in a proven capacity today. There is no magical energy system, no newfangled batteries and we haven’t solved fusion reaction.”

Inspired by US naturalist and biologist Edward O Wilson’s Half-Earth concept, which restricts human development to 50 percent, thereby relieving the pressure on the rest of the planet to return to nature, Young consulted a global network of scientists, theorists and economists.

“Star Wars is fantasy. It’s something you watch on a Friday night with a bag of popcorn and disappear into after a long week.

“The idea of putting 10 billion people in one tiny city is absolutely insane, but Planet City is not a proposition, it’s a provocation.

“If a city of 10 billion people can run off renewable energy, why can’t Sydney? If Planet City can be based on reimagining our diet from meat to algae and sustainable produce grown in indoor farms that are recycling carbon, why can’t the diet of Melbourne evolve in the same way? If we can prove that it works then there’s literally nothing stopping us from making similar kinds of sacrifices.”

But Young approaches his fictional world from more than just a technological lens. Keen to separate itself from the Monomyth or ‘single white male hero’ perspective on which so much of Western cinema is based, Planet City plays out as a continuous festival procession, dancing through the city on a 365-day loop.

“I wanted to tell a different kind of story. One that wasn’t about conflict or a singular hero,” says Young.

“So one of the first things we did was map every religious and cultural holiday, every festival and celebration on a calendar. And what we saw was that there are literally thousands of festivals across any given day.

“So we imagined this kind of carnival moving through the city and, as it moves, it changes its identity and morphs from one culture to another.”

The carnival atmosphere also draws attention to Young’s other major thesis – his contention that climate change is no longer a technological problem, but rather a cultural and political one.

He objects to architects “getting a bunch of billionaire investors” and rebuilding the earth “in their own image”, describing it as nothing more than an “extension of the colonial project”.

In Planet City, the remaining 99.98 percent of the Earth’s surface is returned not just to nature, but to its rightful owners.

“We aren’t imagining some Judge Dredd-style dystopian future where there’s a giant wall around the city and no one is ever allowed to go out,” he explains.

“We imagine certain communities would be allowed to stay on the land and manage it as part of the rewilding process much like national park rangers or stewards.

“In turn, our relationship to the natural world would be more akin to a national park. We’d no longer be in an extractive relationship to the landscape, but rather a custodial one, because a big part of any gesture or remedial act of climate change moving forward needs to also address the radical systemic inequalities that exacerbate it every day.”

If you missed Planet City at the NGV Triennial in Melbourne, you can catch snippets on Young’s eponymous website.

The Australian speculative architect will also be speaking about the project at TEDMonterey, scheduled for the first week of August 2021, and is currently working on both an exhibition for the Getty Center in Los Angeles and a documentary series that explores the real-world applications of the technologies featured in the film.

In 2019, The World Architecture Festival shortlist of Future Projects features a handful of designs committed to creating a more sustainable future. ADR took a look at six setting the agenda in sustainable design.

“Half the challenge of recycling could be solved through good design”