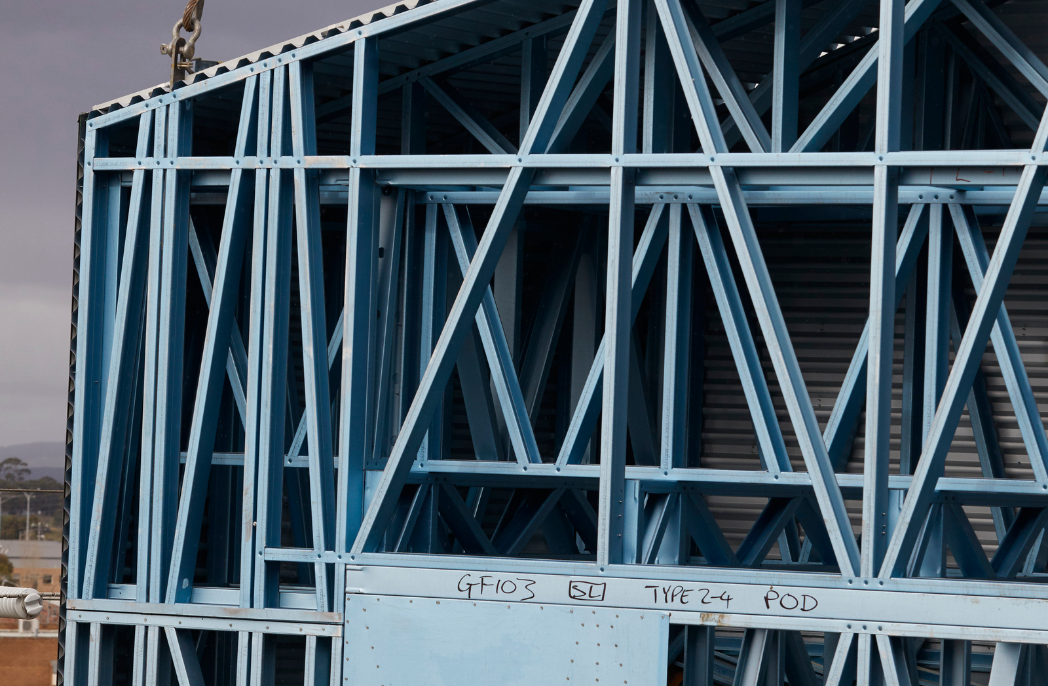 Light, yet strong and dimensionally accurate, the façades of the Latrobe Valley GovHub were made from TRUECORE® steel.

With the aim of creating job opportunities in regional areas, the Victorian Government committed $266 million to a project to build three government department office hubs, referred to as ‘GovHubs’. This office building, located in Morwell in the Latrobe Valley, was the first such GovHub.

WMK Architecture Director and Lead Architect on this project, Steve Tillinger says, “We always knew the design would be different from a traditional office building. The inspiration for the building’s unique roof and protruding façade shapes came from seeing a remnant of an old bucket wheel dredge, during a visit to the Morwell Power Station.”

Throughout Morwell’s rich industrial past, these bucket wheel dredges were a common feature seen in the region for generations2. “They are quite an impressive piece of machinery. The bucket wheel dredge remnant resonated with me, for its significance to Morwell’s industrial past, and for its potential to be transformed into architectural expression,” elaborates Tillinger. This idea evolved into the distinctive volumetric shape of the external façades and saw-tooth styled roofing.

With the design concept finalised, Castlerock Property then focused on the significant challenge of delivering the project with minimal disruption to the local community. Castlerock Property identified that light gauge steel was the best way to build the 18 façade modules to be fixed to the exterior of the building.

Industry Cladding and Roofing (ICR) – the façade cladding fabricator – was appointed and worked with Dynamic Steel Frame (DSF) in the design and construction of these huge modules.

To achieve greater efficiency on-site, prefabricated modules were transported to the site in four pieces, fully assembled and clad on the ground, and then craned and secured into their final position.

Utilising approximately three kilometres of TRUECORE® steel and weighing close to 7.2 tonnes once the external cladding was installed, the light yet strong framing managed the stress of the crane lift without distortion, which could have resulted in the cladding material being damaged.

Adam Bronts, Director – Business Development at Castlerock Property says he was impressed by the assembly of the façade modules. “The accuracy of the design, and the manufacturing of the façade modules was vitally important,” says Bronts. “By using prefabricated light gauge steel framing, we were able to obtain the quality of the build, while minimising disruption and safety issues on-site.”

He adds, “The dimensional accuracy of frames made from TRUECORE® steel ensured that the modules clipped into position on the first attempt without requiring any adjustment.”

Architect, Steve Tillinger closely watched the construction of the building and couldn’t have been more pleased with the outcome. “This was a fusion of art and science coming together. We always knew the inherent benefits of lightweight steel, but its use in this project has really changed our perception of what it can actually do.”

1. www.rdv.vic.gov.au/grants-and-programs/victorian-govhubs/latrobe-valley-govhub
2. www.themandarin.com.au/112895-designs-released-for-govhub-that-will-house-200-new-public-sector-jobs
3. www.rdv.vic.gov.au/grants-and-programs/victorian-govhubs/latrobe-valley-govhub
The content of this case study is based on statements made by the source listed above and is a reflection of their views and experience. Same/similar results are not guaranteed for each user and outcomes may vary across projects. TRUECORE®, COLORBOND®, BlueScope and the BlueScope brand mark are registered trade marks of BlueScope Steel Limited. © 2021 BlueScope Steel Limited ABN 16 000 011 058. All rights reserved.