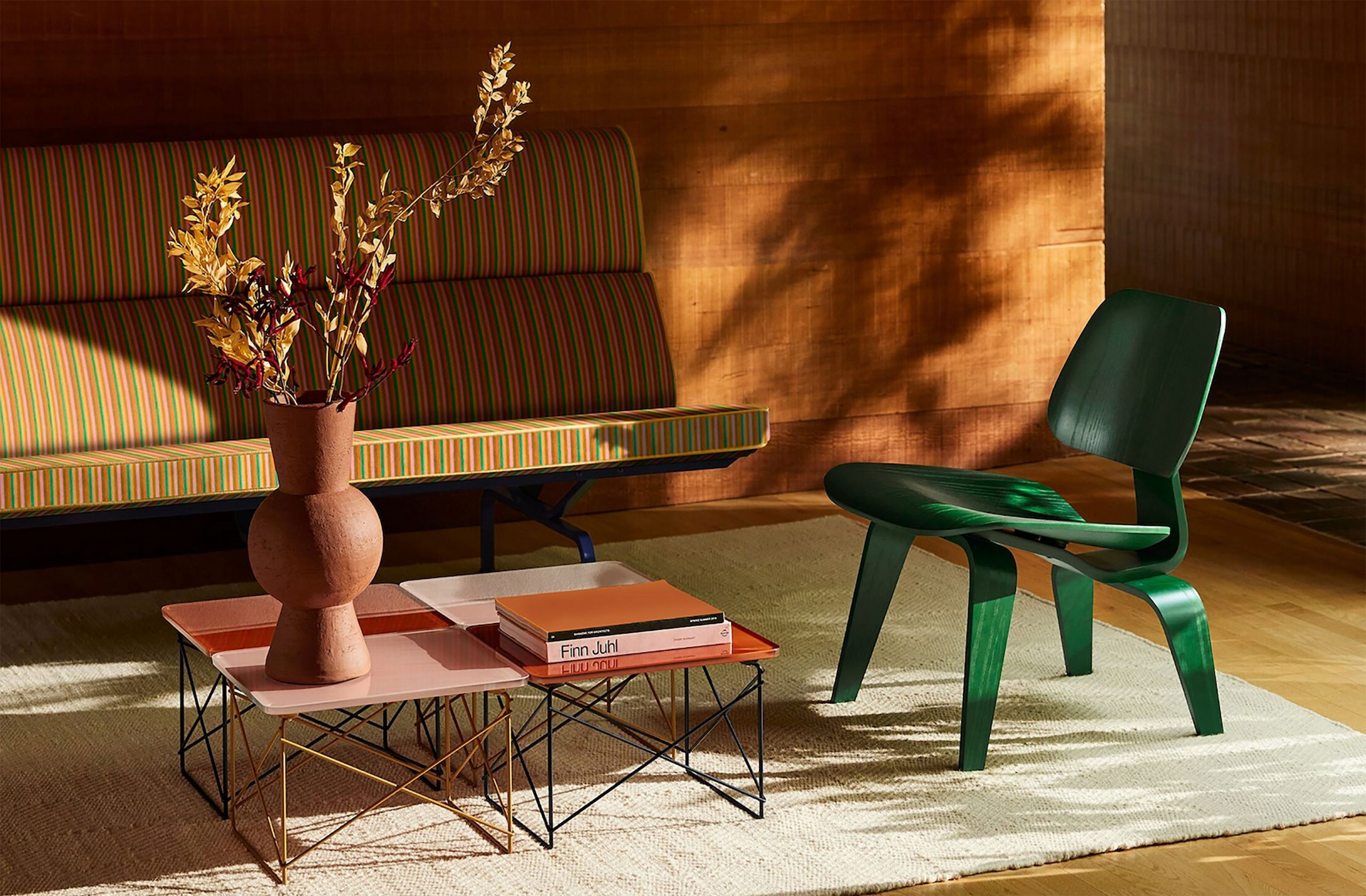 The Herman Miller and HAY collection celebrates the design talent of yesterday and today, bringing together long-time Eames fans, Rolf and Mette Hay, and the designs that inspired them.

Unveiled on 21 September, the new collection features an inspired colour palette and updated materials, serving as a powerful combination of original, timeless design with a contemporary perspective.

The collection also symbolises a full circle moment for HAY founders, husband and wife team, Rolf and Mette Hay, both lifelong admirers of modern design, Herman Miller and the Eameses.

“With this collection, HAY thoughtfully reimagines Eames classics in a forward-thinking, first-of-its-kind collaboration.

“A unique vision of colour, the evolution of thoughtful materials and a beautifully interconnected story of design partnership harnesses the enduring spirit of Herman Miller.”

In anticipation of HAY’s 20th anniversary in 2022, Herman Miller approached Rolf and Mette Hay with a flexible provocation: what could the two design brands do together that they could not create alone?

The answer was an innovative take on the original colour palette and material ingenuity of the Eames furniture made by Herman Miller to deliver a group of pieces that are at once obviously Eamesian and yet uniquely HAY.

With a mix of curiosity, Rolf and Mette’s philosophy, and their respective design partnerships, the new collection pays homage to Charles and Ray Eames, whose unique synergy led to their iconic status in modern design.

Describing their influence, Mette says the Eameses employed a “playful, yet rigorous approach”, which serves as a model for her and Rolf’s own process.

“They were very experimental in taking advantage of new technologies,” adds Rolf. “And they were having fun.”

Like their predecessors, the Hays have always been motivated by the certainty that good design is for everyone – a founding principle behind HAY the brand.

“Since the inception of HAY, our goal has been to provide our customers with access to works by the best designers in the world – designers who understand that if you want to create high-quality industrial design for the many, then you need to find smart ways of producing.”

Regarding that element, Rolf points to Herman Miller’s track record of innovative manufacturing and precision engineering.

“If you look at a product like the Aeron chair, there’s only one company that could develop a chair with such complexity – and that’s Herman Miller. It takes a strong passion for design and a pioneering legacy in production.”

To help modernise HAY’s approach to colour without recreating it directly, the Hays explored the Herman Miller archives for inspiration.

“Being very familiar with the existing colour range, my intention was to focus on looking ahead, instead of looking too far back,” explains Mette.

The Eameses developed a close professional and personal relationship with Girard, who was the founding director of Herman Miller’s textiles division. The association gifted the Eameses a wealth of knowledge.

Girard’s innovation within the textile realm, where he employed bold and unusual colour combinations as well as subtle, understated and textural palettes, offered the Eameses a wide array of options when they were considering how to further elevate their genre-defying mid-century furniture.

Rolf points to history’s many designers, “who are great in terms of giving form to industrial design, but are lacking in [the development of] colour and texture”.

“That was not the case with Charles and Ray Eames – they had a fantastic sensibility, and working with Alexander Girard was inspiring for both of them, as working with his textiles has been for us,” says Rolf.

Complementing the main colour palette is a special edition of the Eames Compact sofa, upholstered in a circa 1955 colourway of Girard’s Jacob’s Coat textile, which at Mette’s request Maharam has faithfully reissued for the collaboration.

Elsewhere in the collection, the material palette has been expanded with the Eames Hang-It-All, which sports cast-glass balls in place of the original painted wood, representing a new play on colour, tactility and utility.

The Eames Wire base low table and Universal base round table, now with cast-glass tops, bring artistic craft and dimension to any space.

As part of MillerKnoll’s commitment to reducing its environmental impact, the Moulded Plastic Shell chairs, both with and without arms, contain 100 percent post-industrial recycled plastic and are available in the HAY-designed six-colour palette.

The Eames Wire chairs are powder-coated for outdoor use with optional cushions upholstered in tone-on-tone outdoor fabric.

A personal favourite product of Mette and Rolf, one of the original Eames prototypes currently resides in the Hays’ own living room in Denmark, a testament to the power of classic design remaining forever contemporary.