Home • Mezzanine • There’s no place like home: finding inspiration in the Aussie landscape 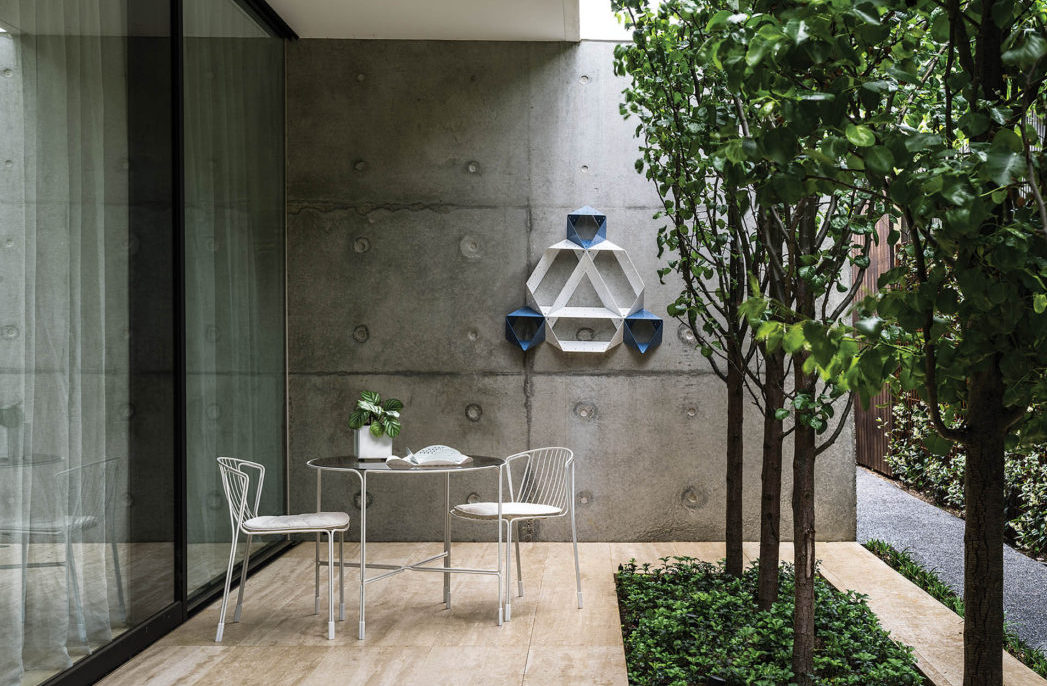 There’s no place like home: finding inspiration in the Aussie landscape

In oceanography, the term ‘gyre’ refers to the network of currents that circulate ocean water around the world. And for London-based designer Brodie Neill, it is the source of inspiration for his Plastic Effects project, which took centre stage at the Australian pavilion during this year’s London Design Biennale.

The project aims to highlight the toxic contents of these currents that carry tonnes of plastic waste, and the impact this has on marine life and ecosystems. Substituting this waste for marble, timber and ivory, Neill’s Gyro table is made from what he describes as ocean terrazzo – pieces of plastic collected from the ocean and composed into a kaleidoscope of immersive colour.

“As a Tasmanian, my connection focuses in particular on the sea and the coastline that surrounds my small remote island,” says Neill, who grew up on Australia’s Apple Isle and studied at the University of Tasmania before embarking on a global design voyage.

The initial concept for this new work first took shape in Neill’s mind when standing on the beach at Bruny Island in Tasmania a little over a year ago, one of the many trips he still makes home to a place where he “finds the connection becoming stronger rather than fading away”.

Australia’s remote location, a frontier nation, has produced some incredible things. Neill says: “I have always believed that the necessity of ingenuity and self-reliance is Australian-wide because of our historic distance from the rest of the world and also the availability of materials and resources that are unique to us.”

That ingenuity and self-reliance is a way of life on the land, as Sydney-based Charles Wilson recalls from a childhood growing up on a farm outside the rural NSW town of Forbes. “Certainly being familiar with many different machines and structures has given me a good understanding of materials and engineering,” he says, and with a bevy of local and international clients producing his work, it is clear that this understanding is paying off.

Wilson’s recent Carafe table for Herman Miller, designed to accommodate work and play, is a piece of true industrial design, combining aesthetics and ideas to further the function of an existing object.

Like his Candelabra for Danish brand Menu that comes together using rare earth magnets, Wilson has built a reputation for creating things that are beautifully clever, a reflection perhaps on the moment he first considered becoming a designer. As he recalls, “One Christmas back in the late 1970s, Mum was given something called a Guzzini Ball,” a space-age plastic picnic basket. “I remember her opening it and exclaiming ‘Isn’t it clever!’ which sounded strange to me as it was the first time I had heard the word ‘clever’ used for an object rather than a person.” From that moment Wilson began considering what it would be like to create clever things instead of simply being clever.

For Wilson, the land has also inspired him aesthetically. His self-produced Serif Stool is designed to resemble the discarded casings of a machine.

Similarly, multi-disciplined creative Christina Waterson’s Stellar collection for Tait is derived from a childhood in the bush, joining the dots in the night sky to create mental images of local flora and fauna. Waterson, who grew up in a small town north-west of Bundaberg in Queensland, now bases herself on the north coast of NSW where she shares a studio with her partner, furniture designer Darcy Clarke.

Growing up in pre-digital remote Australia, Waterson found inspiration and a connection to the outside world in small things. Discovering Liberty of London fabrics in a small local textiles store was a moment that left a lasting impression: “At the time they were so exotic with the flora and fauna depicted being very different to our own,” she says.

“The fabrics were a connection to the world beyond the town, as was music, video clips and magazines. They connected me to fashion, design, places and spaces all around the globe.”

While travel plays an important role for Waterson, she still holds a connection to a more local way of life. A sharp sense of humour and the ability to engage in conversation with people from all walks of life are things she sees as a result of a country upbringing, though she has also learnt to trust her instincts. “It was my gut feeling that led me to that unbeaten path against advice to ‘just do one thing’ and ‘practice as an architect’,” she says, an architectural graduate who now works between the boundaries of art, design and architecture.

Having spent her days in the city, Waterson feels at home in her new rural setting: “Living and working in such a beautiful environment within a grounded and generous community means you make time to appreciate and be a part of the community and place.”

Though these days she is just a little less isolated: “There’s a certain duality in being connected to the high-speed NBN and working away to the sound of mooing cows in the field next door.”