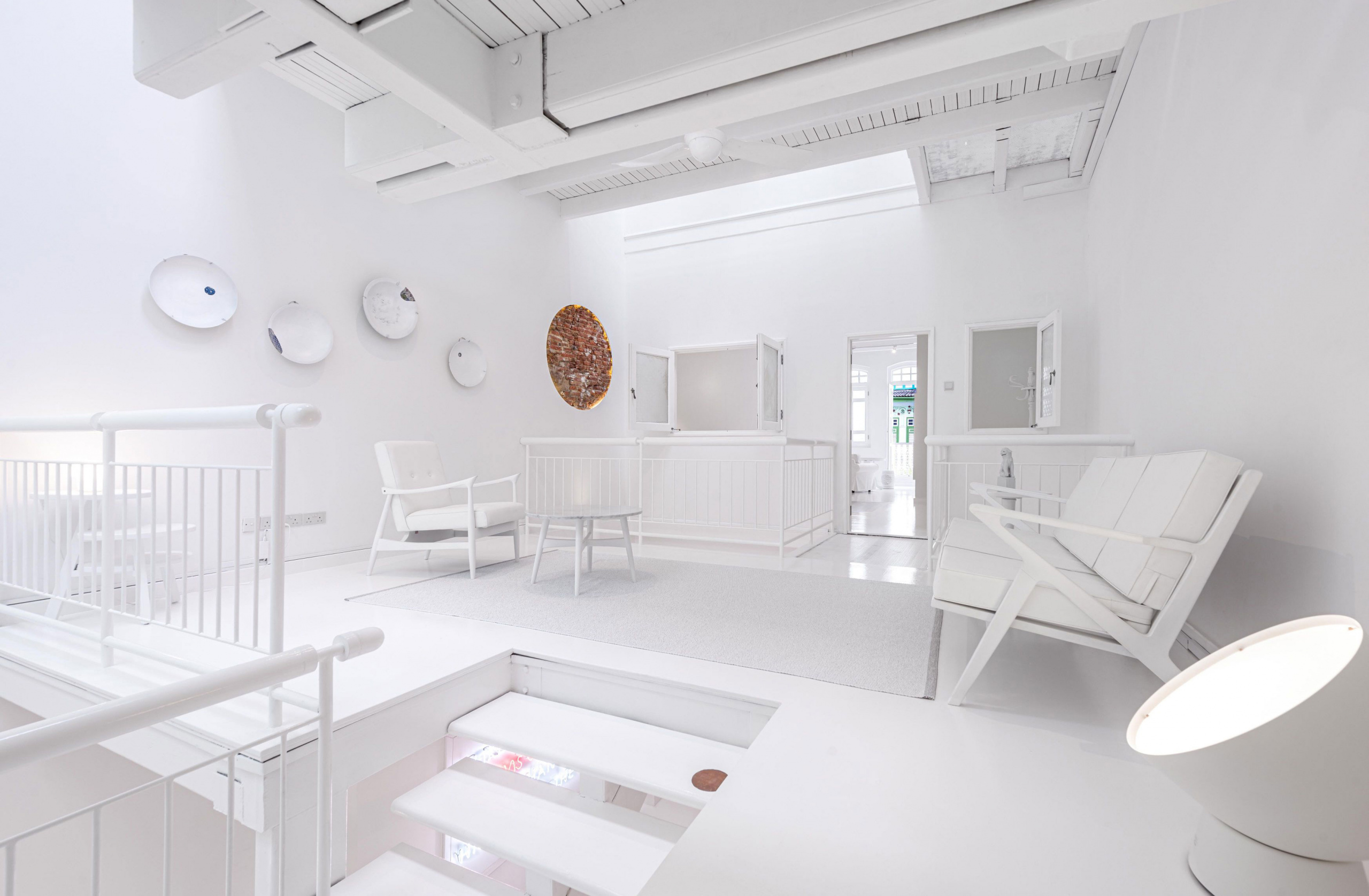 When Ministry of Design (MOD) had a tight budget and just four months to design, source and fit out a heritage shophouse in Singapore, it chose to paint the entire space white and name it Canvas House.

“Blurring the boundaries between space and object, MOD conceptually blanketed Canvas House with a layer of white that provides a canvas for the future, while revealing historical preservation in concentrated spots,” says the Singapore studio.

The white colour palette was, according to the studio, a way to “blur the distinction” between the new fit out and old four-storey conservation shophouse.

It also “blurs the distinction between the spatial elements and the objects that sit within it” as all the furniture, much of it upcycled, is also painted white.

The shophouses of Singapore evolved from the early-19th century during the colonial era. Traditionally, they had a narrow frontage with a sheltered corridor at the front for pedestrians (called a five-foot way).

“Our response was to layer over the existing history with a proverbial blank canvas while leaving choreographed glimpses into the past, blanketing both space and the furniture in it – allowing us to blur the inherent boundaries between past and present, object and space,” says MOD director Colin Seah.

The only pops of colour are chosen “peek-a-boo reveals”. In the communal dining space, a circle of original brickwork; in the stairs, round timber reveals.

“With everything white, the object/space dichotomy is blurred. The house becomes more whole rather than a space populated by objects and people that move in and out,” adds the studio.

Located in the Tanjong Pagar neighbourhood, Canvas House’s suites will be rented out to expats on a short term basis. It soft-launched at the beginning of this year with a handful of tenants.

In the suites, “time shadows” are cast by the beds; their shape outlining where the sun casts a shadow on the underlay of the timber floor at specific points of the day.

Other elements like ceramic plates hung on the walls, vintage decorative dragon or longevity vases and wooden screens are scattered throughout the space with smaller vignettes revealing the intricate designs underneath as a nod to the property’s heritage.

A custom single-stroke white and red glass neon art piece in the dining room quotes Thomas Jefferson – “I like the dreams of the future better than the history of the past”.

The quote “summarises the attitude of the house”, says MOD, acting as “a neutral white canvas for the future to be dreamt upon, rather than a wholesale homage to the past.”

MOD collaborated with local self-taught artist and designer The Kang Accessory Artist, who specialises in upcycling and working with fused plastic.

Kang created three sets of lights with fused plastic made from cling film placed at the five-foot-way, the living and the atrium areas.

Keeping to the theme of layers, the cling film was layered and then ironed and heated to create a waterproof, leathery material.

Ministry of Design is an architectural, interior design and branding firm created by Colin Seah in 2004. Headquartered in Singapore, it has offices in Beijing and Kuala Lumpur.

In 2010, Ministry of Design completed Zig Zag House as part of an architectural collective, where six (relatively) unknown architects were each invited to design a villa on a communal site in a discreetly moneyed Singaporean neighbourhood.

Inside World Festival of Interiors